Accessibility links
Ig Nobel To Nobel: Creative (And Fun) Science Wins Two Russian-born scientists won the Nobel Prize for Physics for their work on graphene, the strongest and thinnest substance ever discovered. But one of them, Andre Geim, also holds a more dubious honor: He won an Ig Nobel prize in 2000 for his work on the magnetic levitation of frogs. 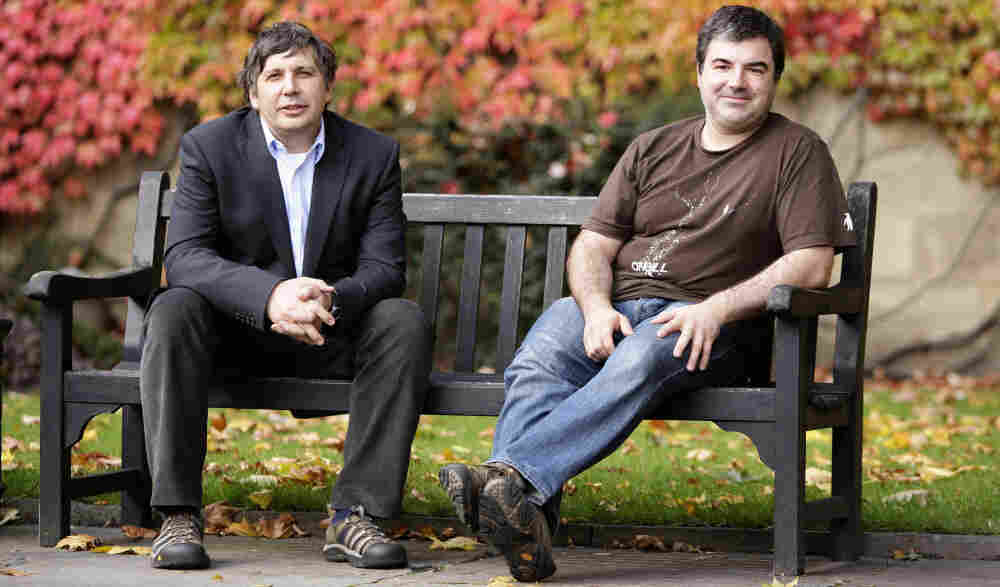 The star of the physics world today is a new form of carbon: graphene. It's the world's thinnest material, and also perhaps the strongest.

The two scientists who discovered graphene in 2004, Andre Geim and Konstantin Novoselov, won this year's Nobel Prize for physics. But among non-physicists, the leader of the team may already be more famous for one of his laboratory tricks: using magnets to levitate a frog.

But you don't get a Nobel Prize for tricks with frogs -- for that, there's the Ig Nobel prize, which is devoted to silly science. And Geim, a Russian-born physicist at the University of Manchester in England, has now become the first scientist to win both.

And The Ig Nobel Goes To...

In 2000, Andre Geim won the dubious honor for his work on the magnetic levitation of frogs. He also levitated tomatoes. Watch videos of his experiments and find links to his work below.

Study: Of Flying Frogs And Levitrons
Molecular Magnetism And Levitation

At the award ceremony for his 2000 Ig Nobel, Geim told everyone that levitating a frog led to lots of requests, including one from the leader of a small religious group in England, "who offered us a million pounds if we could levitate him in front of his congregation to improve his public relations, apparently."

There was, in fact, a real point to the frog experiment, which is why pictures of it are in lots of physics textbooks. It demonstrates a phenomenon called diamagnetism. Diamagnetic materials like water are pushed away by magnetic fields, so a really powerful magnetic field can hold up a frog, which is mostly water. (You can watch a video of the levitating frog experiment on the left.)

Allen MacDonald, a professor of physics at the University of Texas, Austin, is a longtime admirer of Geim's work.

"He's just exceptionally creative," MacDonald says. "He's always looking for something new, and wanting to be creative is not enough. He just has tremendous intuition."

That intuition came into play in the discovery of graphene. Six or seven years ago, Geim and a more junior colleague, Novoselov, took a block of graphite -- the same material that's in the center of a pencil -- stuck some Scotch tape to it, then pulled the tape off.

Graphite is made from billions of layers of carbon atoms laid on top of each other. Geim and Novoselov thought that maybe the tape would pull off just a few of these layers -- maybe even just one.

Amazingly, the tape method worked. And in October of 2004, the two scientists announced that they had managed to create single sheets of carbon just 1 atom thick.

Physicist Philip Kim at Columbia University remembers reading the paper and feeling scooped. Kim had been trying to do the same thing, but by using more high-tech methods.

All these scientists wanted to get their hands on superthin layers of carbon because they were pretty sure that this new material -- graphene -- would exhibit some remarkable physical behavior.

MacDonald, the University of Texas physicist, points out that in graphene, electrons cannot move up or down -- they can only move around the flat sheet. Suddenly they move differently: at a constant speed more like light.

But graphene has more practical properties, too -- it's stronger than steel, it's a superb electrical conductor and it's transparent. Scientists speculate that it may eventually be useful in all kinds of electronic devices, from mobile phones to computer chips.

But Geim said today he's not too concerned about those future uses -- he cares only about the research itself.

He and Novoselov will receive their awards in Stockholm in December.

The Nobel Prize in Physics 2010