Accessibility links
Single, Middle Class And Getting By The government says median income household is just under $50,000, and you'd think that single people in that category would be the most comfortable. But as Maryland resident Jada Irwin knows, a national median-income salary goes a lot further in some parts of the country than others. 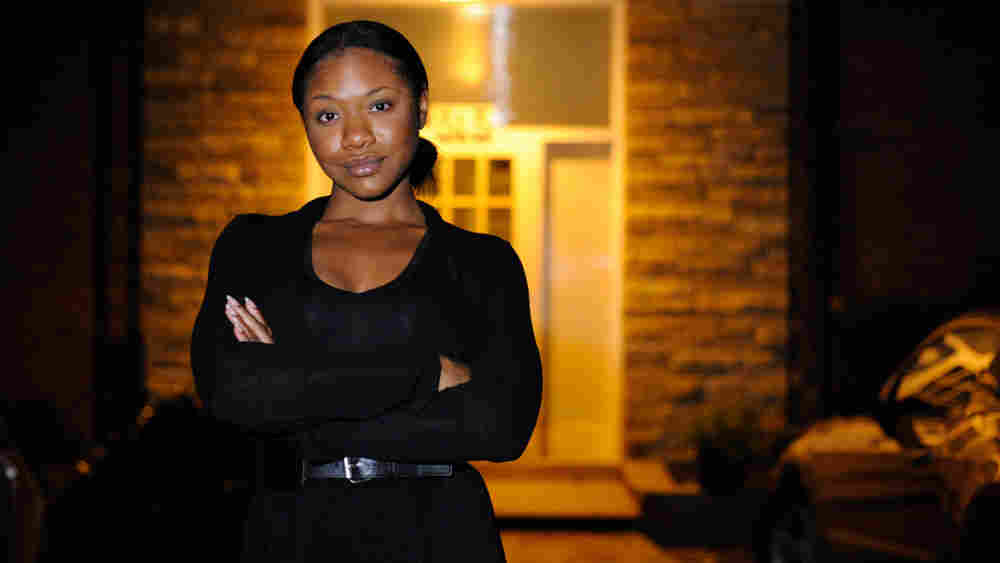 Originally from St. Louis, Mo., Jada Irwin moved to the Washington, D.C., metropolitan area for work. As a single woman, she likes where she lives, but if she were to have children, she says, she would move to South Carolina or somewhere similarly less expensive. Mito Habe-Evans/NPR hide caption 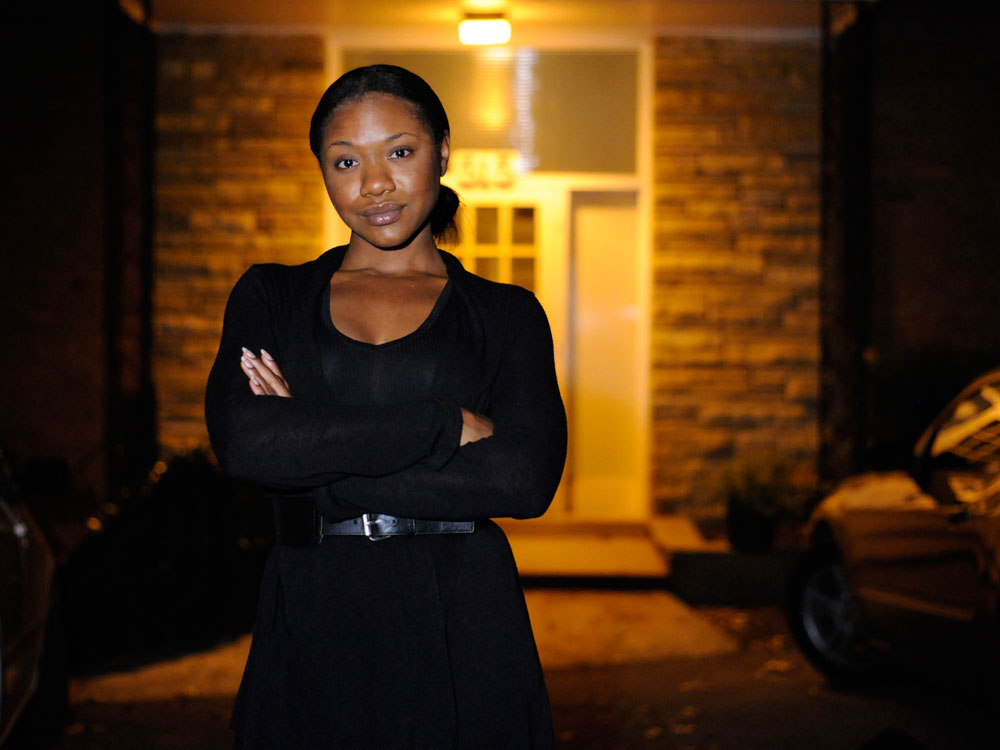 Originally from St. Louis, Mo., Jada Irwin moved to the Washington, D.C., metropolitan area for work. As a single woman, she likes where she lives, but if she were to have children, she says, she would move to South Carolina or somewhere similarly less expensive.

Part of the series, Living In The Middle

The government says median income household is just under $50,000, and you'd think that single people in that category would be the most comfortable. But as Jada Irwin knows, a national median-income salary goes a lot further in some parts of the country than others. 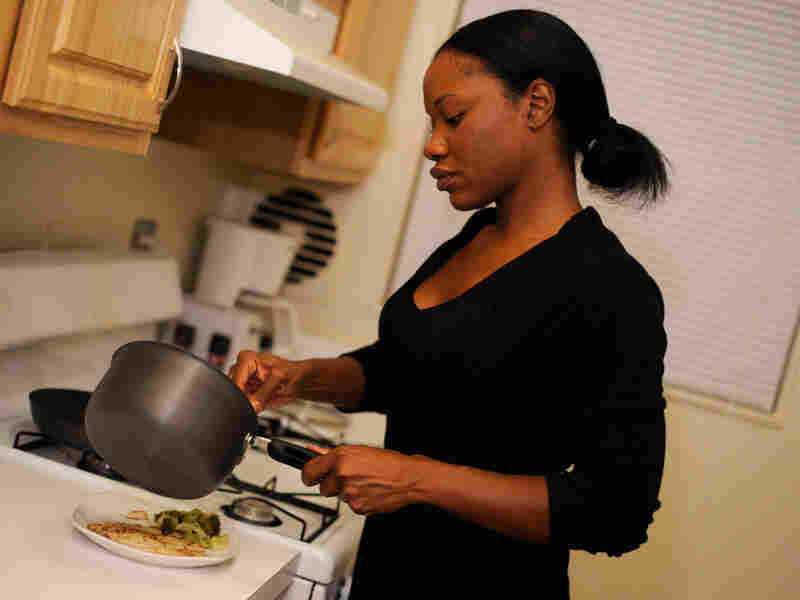 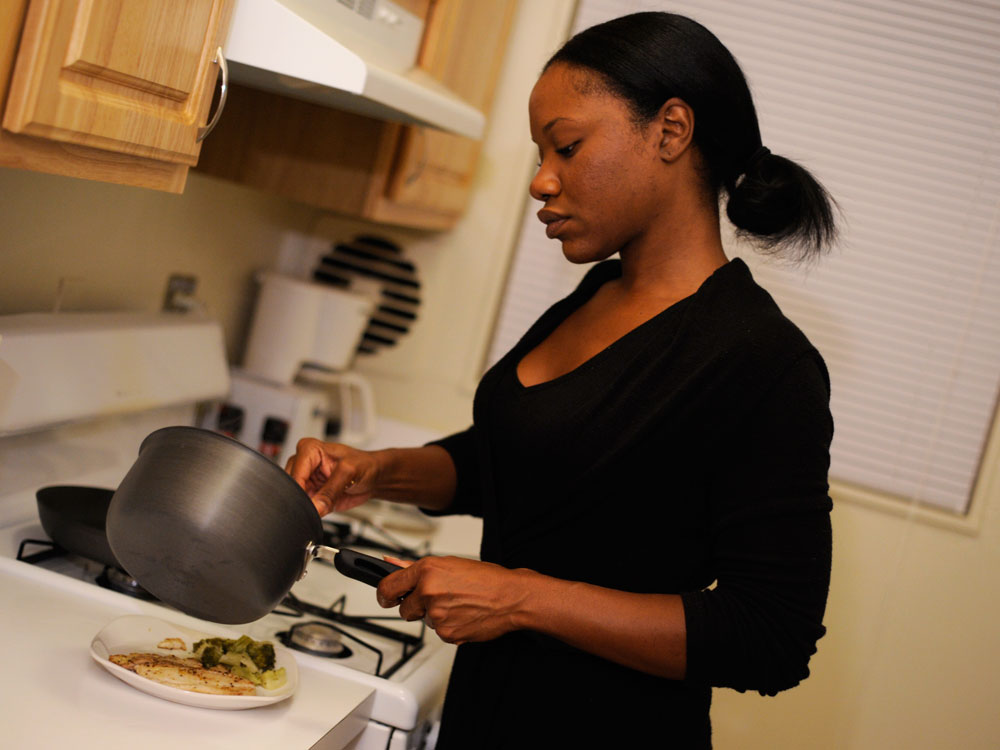 Jada Irwin prepares dinner in the kitchen of her apartment.

"I could take a trip," Irwin says. "I could go to Atlanta or New York for the weekend and afford to shop while I was there. If somebody came into town unexpectedly, I could afford to take them out for a nice dinner without wondering what bill I'm going to have to pay late."

Then Irwin lost her job in budget cutbacks and decided to move to Washington, D.C. She knew it would be more expensive, but it offers more work in her field of communications.

Irwin now lives just over the city line in a Maryland suburb and makes $47,500 -- just under the national median household income -- working for an advocacy group for abused children. An apartment closer to her job in D.C. was beyond her budget, but she was happy to find this relatively good deal for $1,100 a month.

"And my guest room," she gestures through a door, "is fully equipped with this air mattress here."

The second bedroom lets family visit. If need be, Irwin figures she could get a roommate to share expenses.

Irwin makes good use of her galley kitchen, cooking several times a week and eating leftovers the other days. She says she'd love to go out for a decent meal once a week, though she can only afford it once a month.

She insists she's not high-maintenance; she can bargain shop with the best of them. Yet, does this feel like middle income? 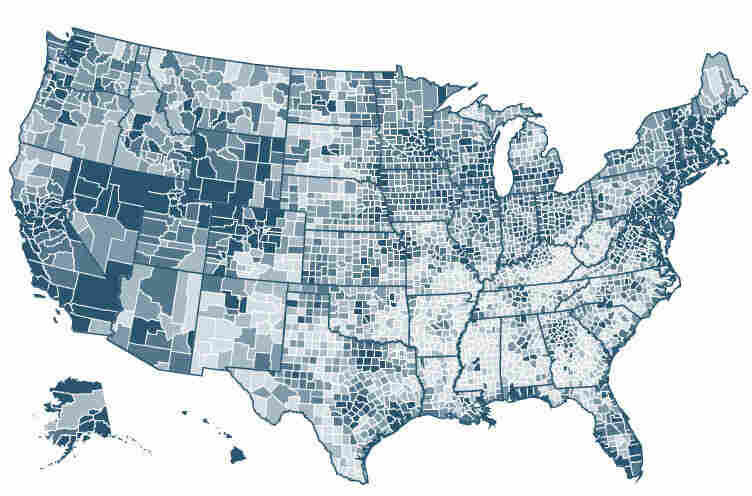 "I think it's crazy," she says. "Middle income to me, here [around Washington, D.C.], would be $80,000 or $90,000 a year. That's what I think a person would probably have to make in order to live comfortably, especially if you have a family and other people to take care of."

The Cost Of College

At age 33, well into adulthood, Irwin admits she can feel frustrated.

"I definitely feel like I should be more advanced than I am," Irwin says. "I have friends that are head and shoulders above where I'm at financially and professionally in their careers."

But it took Irwin a while after high school to feel focused enough for college. After a couple of years at a community college, she finally graduated from the University of Missouri in 2003. Now, that degree is also a drag on her finances.

Test your knowledge of the middle class with these five questions:

She says her middle-class parents made clear that not going to college was not an option. But they'd saved nowhere near enough to pay for it.

"My mother also took out a loan my first year of college, so she helped with a loan on her end," she says.

And Irwin racked up three student loans of her own. She's been sending regular checks for seven years now and was certain she must have made a dent. But she looks a little stunned when she logs on to the student loan website.

"Wow," she says, studying the screen with a serious expression. "Is that how that works?"

After the initial shock, she laughs and says she'll probably be long gone before the balance is paid. Still, she believes she's better off financially than she'd be without a college degree.

Irwin says she pays close attention to economic news these days. She is convinced that belt-tightening is the new American norm. And yet, at a time of so much misery, she feels blessed to have work she loves.

"This might sound kind of selfish," she says, but "I'm more hopeful that I'll be all right than that the economic system as a whole is going to start working great for everybody, to tell the truth. I always seem to walk between the raindrops."

Irwin is doing OK in the economic middle. But she still looks forward to the day she can walk into a store "on a humbug," as she puts it, see something she likes, and buy it.