Accessibility links
Foreclosures: A Busted System Or Veiled Opportunity? In the past few weeks, three banks have said they are holding off on foreclosures because of what they call "procedural" issues. And several states have banned all or some foreclosures. But analysts are split on whether these developments will help or hurt the housing recovery. 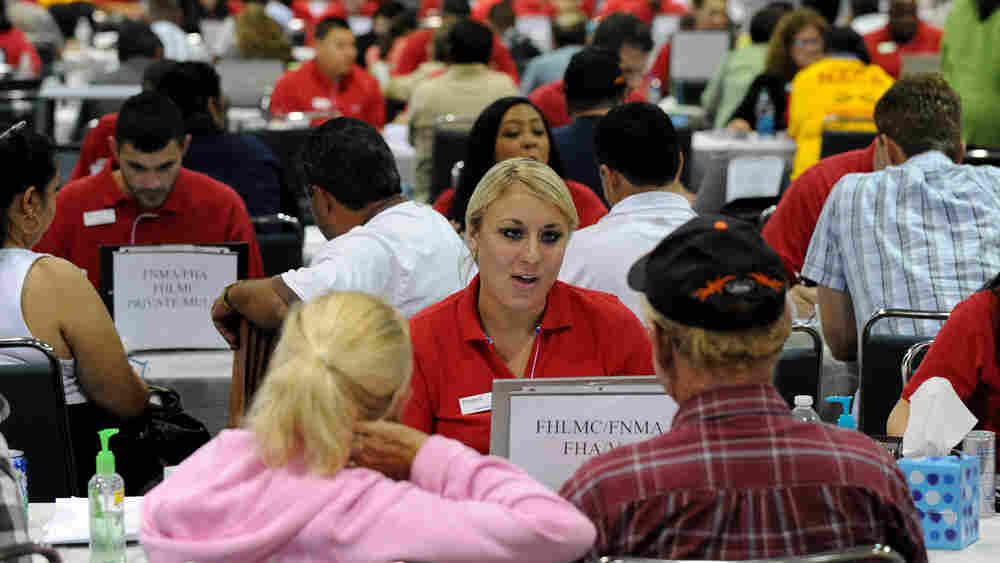 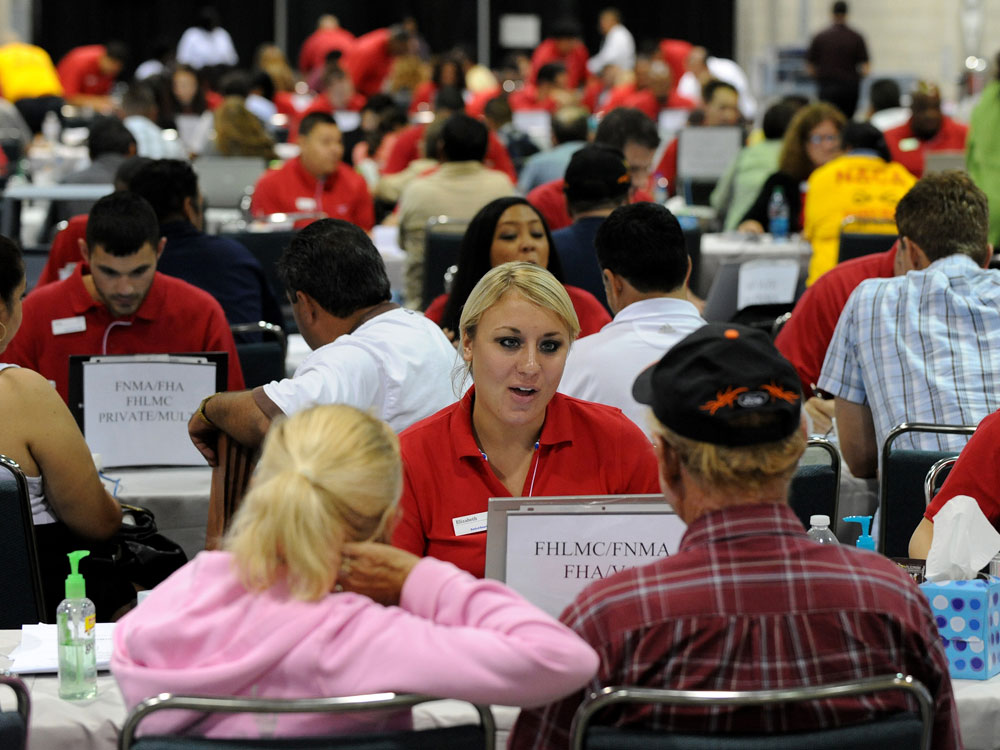 Homeowners speak with bank consultants in Los Angeles in September at an event put on by the  Neighborhood Assistance Corporation of America. The organization's CEO, Bruce Marks, says foreclosure suspensions at three major banks and several states may actually help stabilize the economy.

Normally, foreclosure on a home can take a year or more -- but now it will likely take longer.

In the past few weeks, three banks have said they are holding off on foreclosures because of what they call "procedural" issues. And several states, including Texas, California and Connecticut, have called for a freeze on all or some foreclosures. Other states' attorneys general are now investigating whether banks cut corners in the foreclosure process.

But analysts are split on whether these developments will help or hurt the housing recovery.

A foreclosure involves reams of paperwork.

"You've got virtually every phone call, every mailer for however many years since this loan was taken out," says Florida attorney Dustin Zacks, who represents people contesting foreclosures.

He questioned workers at companies handling his clients' foreclosures who had signed affidavits saying they had personal knowledge of all the documents in each of those cases.

"And when we asked them, 'OK, what books, documents and records did you look at,' the answers were startling. Nothing: 'I didn't look at anything outside of this affidavit,' " he says.

Such affidavits were required in states where courts oversee the foreclosure process.

Since this came to light, three banks -- Chase, Bank of America and Ally Financial, an NPR underwriter -- said they would delay foreclosures in those states.

That's not all: House Speaker Nancy Pelosi this week asked for a Justice Department investigation, and some are calling for a nationwide moratorium.

'It Could Be A Real Mess'

But how significant are halting foreclosures to the housing market overall?

The answer to that question depends largely on whether banks and their loan servicing operations were sloppy just on this final affidavit, or all the way through the process.

For their part, Chase and Ally said in statements they stand by the validity of their foreclosures. In other words: No one was wrongfully kicked out of their home as a result of the so-called robo-signing of affidavits.

Michael Knoll, a University of Pennsylvania professor of law and real estate, says if all other procedures were proper, it's a minor blip. The delay will only last a few months.

But if the state courts discover a pattern of cutting corners -- for example, homeowners didn't get timely or proper notice from the banks -- that is a big problem.

"In that case, the foreclosure mechanism is potentially busted," he says.

And if the system is busted, then it's likely busted for the whole country -- not just the states where the banks are delaying their foreclosures.

"It could be a real mess," Knoll says. "And it could especially be a real mess if you're somebody who bought one of these houses and there's a question: 'Did you get good title?' "

In other words, there's a possibility a bank will have to unwind a foreclosure on a home that's already been sold to someone else.

A Chance To 'Reinvent' The Process

Rick Sharga, vice president at the research firm RealtyTrac, says he does not believe it will come to that.

"Bottom line is it's not expected by anybody at the moment that we'll see a large number of these foreclosures overturned," he says. "Or that we'll see any reason that the paperwork has been in error, once it's reviewed."

Sharga says he thinks the main outcome is that the delays will simply prolong an already protracted housing crisis.

But on the other side, Bruce Marks, CEO of the Neighborhood Assistance Corporation of America, or NACA, believes such a delay could actually help stabilize the economy. NACA is one of the most vocal homeowner advocacy groups.

"The foreclosure conveyor belt has been stopped," Marks says. "And now is our opportunity to reinvent [and] do this process the correct way."

He says if this new scrutiny forces banks to give each case more individual attention, perhaps more homeowners will avoid foreclosure or get modifications on their loans. And that, he believes, is the key to a healthier economy.