Accessibility links
Study Links Honeybee Deaths To Fungus, Insect Virus Researchers have a pair of new suspects in the mysterious collapse of honeybee colonies across America. The combination of a virus and a fungus can lead to a condition called colony collapse disorder, but the two pathogens might not tell the whole story. 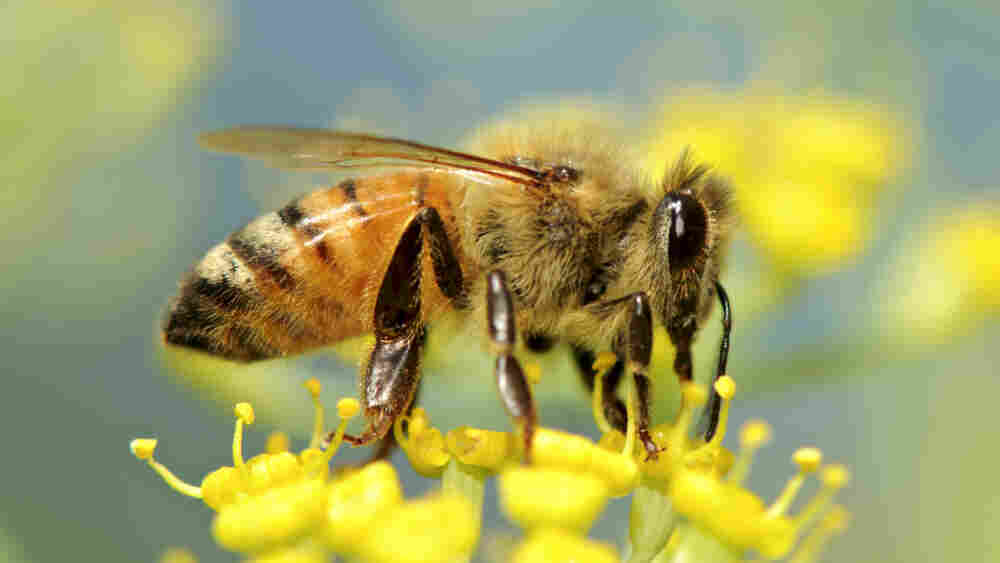 Bee colonies across the country are dying because of colony collapse disorder, and researchers say a combination of a virus and a fungus could be playing a key role in the bees' sickness. Christopher Tompkins/iStockphoto.com hide caption

There's a lot of buzz in the scientific community about a new study linking the collapse of honeybee colonies to a fungus and insect virus first seen in Asian bees.

"Our data suggests that these two pathogens interacting together may be playing a pretty big role," says study author Robert Cramer of Montana State University. The Nosema ceranae fungus can sicken bees when they ingest spores, and Cramer explains that the occurrence of both the iridescent virus and the fungus at the same time seems to be the problem.

The findings don't crack the case, though: "Not even close," says Cramer. But he hopes his study, published this week in the online journal PLoS One, offers an important clue.

How A Hive Collapses

Beekeepers have been reporting troubles with collapsing colonies for more than six years. The story is almost always the same: The population starts to dwindle, and then there's a rapid disappearance of bees, sometimes within just days. Pennsylvania beekeeper Dave Hackenberg recalls the experience from 2004 of checking on a hive one morning after noticing a loss of bees. He estimates there were several thousand in the hive.

"But by 1 or 2 o'clock in the afternoon, nobody was home," Hackenberg says. "They just totally disappeared."

Colony collapse disorder has been linked to 40 percent to 60 percent of disappearing beehives over the past six years. In a typical year, a beekeeper may lose up to a third of bees from extreme weather conditions, so some die-off is normal. "But this is more than some beekeepers can handle," Hackenberg says.

Prior studies have also linked colony collapse to different viruses and pathogens, but one researcher says viral sicknesses may be just one of the threats that bees face.

"I think that the data so far from lots of studies -- including from this one -- shows that the bees get very sick," says Dennis vanEngelsdorp of Penn State University. "But what we don't know is why they become susceptible to this host of pathogens, viruses and fungus."

Bees have thrived for thousands of years and very likely survived many different types of diseases, so it's not clear why they seem so vulnerable now.

VanEngelsdorp says the growing consensus is that there are multiple causes working together to weaken the immune system of bees.

Environmental factors may play a role, and some scientists point to bees' nutrition. Since they're often forced to pollinate one specific crop, they may not get all the nutrients they need to be healthy. Others, like Jennifer Sass of the Natural Resources Defense Council, point to chemical exposures.

"Many pesticides and fungicides are highly toxic to bees," she says.

And scientists say it's likely that a combination of pathogens and environmental stressors work together to create a perfect storm.