Accessibility links
'Likely Voters' Prove Hard To Pin Down Pollsters work hard to find those engaged Americans who are almost sure to vote on Election Day. But in a fast-changing political world, old methods to identify them may be falling short. If pre-election polls are skewed because of that, turnout could be affected. 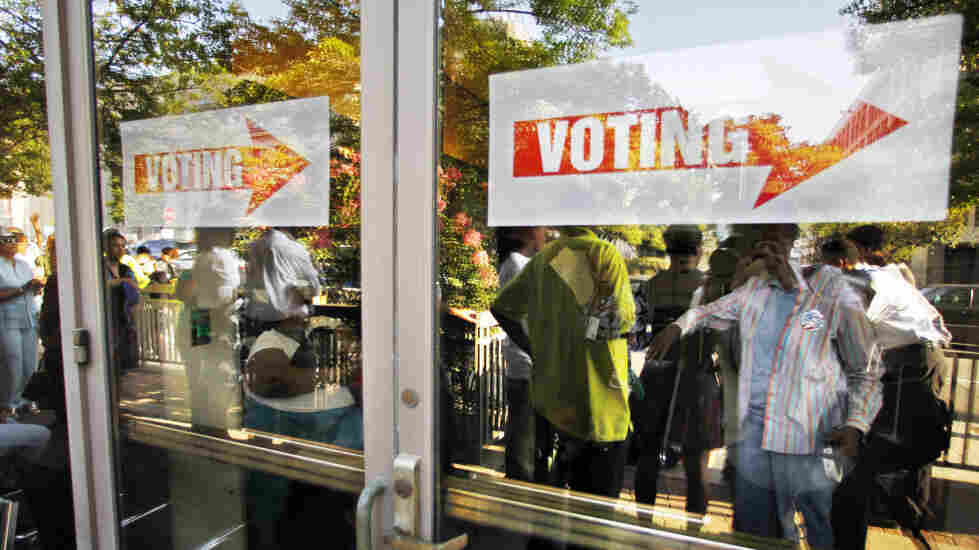 They are the late-in-the-campaign-season holy grail of pollsters, the surest predictors of results, and providers of the kind of data you can believe in --  especially in today's topsy-turvy political world: "Likely Voters."

Those are the Americans who consistently follow politics and assure pollsters that they are as good as certain to head to the polls Nov. 2, or vote early -- if they haven't already.

But in recent days, a flurry of "likely voter" polls gauging enthusiasm among Republicans and Democrats -- an indicator of election turnout -- has produced results different enough to prompt some analysts to step back and ask whether pollsters have gotten lost on their grail trail.

And some of those analysts are asking the question, as polling analyst Mark Blumenthal did this week in his Huffington Post column: "Does anyone know what the heck a likely voter is anymore?"

It's not that likely voter polls in past election years have all been in sync. On the contrary, says Quinnipiac University poll director Douglas Schwartz:

"This does come up every election -- but it may be cropping up more now because there's more variability in an off year," he says. "And when you get a low-turnout election, it does become more difficult to find those likely voters."

But some pollsters suggest that there are other variables at play this year -- from the residual effects of the historic 2008 presidential election to the "art" pollsters may be applying to their hard data to establish their likely voter pools. They have made the category of most-likely-to-vote either more difficult to pin down, or varying between surveys.

The difficulties of tracking "likely voter" sentiment may seem an insider-y issue, but it plays out publicly in a big way. These national mood measures help cement voter mind-set, encouraging or discouraging some, though they may not fully or even accurately reflect what is happening in specific races.

After a handful of recent polls measuring likely voters' generic party preferences for the U.S. House showed that Republicans had a small-to-considerable edge over Democrats, the GOP touted the numbers as more proof of momentum that they believe will drive them toward big victories in congressional races this fall and beyond.

A Gallup Poll found that likely voters generally prefer Republicans by 13 to 18 percentage points, depending on how the survey organization estimated voter turnout. They preferred Republicans by 6 percentage points in an ABC/Washington Post poll, and by 45-42 percent in a Rasmussen Reports poll (which was done with computers asking the questions, not live operators as with the other surveys).

But at roughly the same time, Democrats pointed to a generic House preference poll done by Newsweek that gave them an 8-point lead over Republicans.

In his FiveThirtyEight polling blog for The New York Times, Nate Silver dismissed the poll differences as resulting from what he said are "some combination of statistical noise and legitimate differences of opinion about how to model the electorate." An average of the polls, he suggested, would give you the big-picture view of what's happening.

But J. Ann Selzer, an Iowa-based pollster whose clients include Bloomberg News and The Des Moines Register, cautions against dismissing poll variations this year as business as usual. The differences may reflect actual and ongoing changes in the electorate and growing difficulties in reaching voters who use cell phones exclusively.

"The best predictor of future behavior is past behavior -- until there's change," says Selzer, who drew national attention for her spot-on polling of the 2008 Iowa caucuses, accurately predicting historically high turnout and Barack Obama's victory.

Hillary Clinton's campaign relied on the past-as-predictor model, and it missed the tidal wave of independents and some Republicans who showed up at those January caucuses.

In the 2008 presidential election there was change, Selzer says.

"Everything was predictable until 2008, and things are still up in the air," she says. "Anybody who thinks that a model predicated on past voting is going to get you accurate results is dreaming."

Selzer cautions pollsters who choose to use tools of art to form assumptions and sculpt their versions of likely voter polls. "If you are discounting what the voters are telling you they're going to do, and substituting your own judgment," Selzer says, "you do that at your peril."

(It's a fair bet that some GOP pollsters underestimated the primary-season message that generally conservative Tea Party activists were sending when they said they didn't particularly like either party. After five Tea Party-fueled Senate GOP primary upsets -- from Sharron Angle in Nevada to Christine O'Donnell in Delaware -- they get it.)

The basic tenet, Selzer says, is: "Keep your dirty fingers off your data," including deciding on your own what you think turnout would be.

Respected ABC News pollster Gary Langer, who uses a number of different likely voter models to screen respondents, says that those who are questioning this season's survey results simply don't care for the results.

— How much thought have you given to the upcoming election for (president, Congress, etc.) — quite a lot, some, or only a little?

— Do you happen to know where people who live in your neighborhood go to vote?

— Have you ever voted in your precinct or election district?

— How often would you say you vote — always, nearly always, part of the time, or seldom?

— Do you, yourself, plan to vote in the election this November, or not?

— How certain are you that you will vote (absolutely, fairly or not)?

— Thinking back to the elections held for Congress in (the most recent cycle), did things come up that kept you from voting, or did you happen to vote?

In each case, respondents are given a choice of potential answers. The polling firm says it then "scores each respondent on a scale ranging from 0 to 7. ... The respondents with the highest scores (usually a 7 and often a 6) are considered likely voters."

And with his poll showing a 16-point gap between Republicans who say they are "certain" to vote this fall (77 percent) and Democrats who say the same (61 percent), it's not difficult to guess who is unhappy with the numbers.

Some pollsters, including Selzer, argue that the current economic downturn has made people, including likely voters, more difficult to reach. Because of belt-tightening, a growing number of voters now rely solely on cell phones and, for a variety of reasons, are much more expensive for pollsters to survey than land-line users.

The expense has meant that fewer polls are being done, trends are more difficult to track and changes in momentum are being captured later.

How They Do It

The granddaddy of so-called likely voter models is the one used for decades by Gallup. It is, the company says, simply a model to identify "Americans who are most likely to vote in a coming election."

Respondents contacted by telephone are asked a series of seven questions that assess whether, in Gallup's model, they intend to vote.

The questions focus on political engagement, past voting behavior and plans for voting in the coming election. How much thought has the person being surveyed given to the election? Does he or she know where people in the neighborhood vote? Has the person voted in his or her precinct before? In the last midterm election? How frequently? And how certain is that person that he or she will vote this Election Day?

Other pollsters have their own "secret sauce" for building their likely voter models. It can be as simple as determining whether the person on the other end of the phone is a political junkie who plans to vote -- regardless of voting history. (Those models reflect the argument that past voting behavior it too heavily weighted in some likely voter calculations.)

Or the models can be as complicated, Blumenthal writes, as ones that draw data from sources other than the person on the other end of the telephone and where pollsters apply their "own judgment," giving more weight to certain respondents based on demographics or even party identification.

Because of the expense of polling people with cell phones, some pollsters privately say that they have relied on land-line only surveys. Critics say that is an untenable practice. A recent Pew Research Center study found that failing to consistently reach cell phone-only users produces bias in surveys. Democrats are underrepresented in land-line-only surveys, Pew found.

Schwartz of the Quinnipiac Poll notes that during the 2008 presidential election there were dueling narratives -- that polls either overestimated Obama's support or underestimated it.

"Every election year there's a question about whether the polls are capturing the likely voters accurately," he said. "It does make people question the polls."

But that's a good thing.

The current attention being paid to the differing likely voter numbers coming from polls shines a light on the pollsters' methods for deciding who is most likely to show up in the fall. And it also raises the question of whether the country's current political condition may turn some of those models on their heads. Complicating factors include the emergence of the Tea Party movement, and the open question of whether Obama can again motivate the nonhistoric, non-"likely" voters who put him in office to help his party now.

Polling analysts also note that this week's surveys ask only about House candidate preferences based on party and don't mention specific candidate names. Those "generic" questions may or may not elicit answers that fully reflect how the likely voters will act in November.

So, as you watch the numbers, advises Selzer, if you see a "likely voter" preference poll that isn't measuring a specific congressional race, with specific candidates, "treat the results like a national mood thermometer."

And these thermometers may have varying temperatures, but continue to show a decidedly strong Republican mood.