Accessibility links
Bel Canto with Balance: Bellini's 'Norma' Perhaps the ultimate bel canto classic, Bellini's masterpiece features a powerful story and one of the most challenging soprano roles in opera. This production is a rare chance to hear selections from Norma the opera performed on original instruments, by the excellent orchestra Europa Galante.

From The International Music Festival (Warsaw) 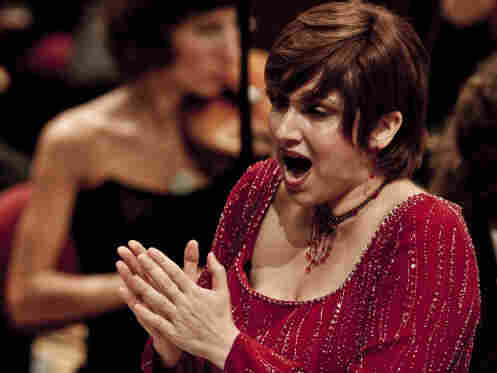 Like all of Bellini's operas, Norma is filled with memorable melodies, and they're not confined to its many great arias. Some of the score's finest numbers are duets, including this one, from Act Two, for Norma and Adalgisa (sopranos Katia Pellegrino and Lucia Cirillo). In it, Adalgisa pledges her loyalty to Norma and the two women reaffirm their friendship -- despite the fact that they're both in love with the same man.

In another stirring duet, near the end of the opera, Norma is in a less forgiving mood. She confronts Pollione (tenor Gregory Kunde) with his betrayal, saying, "Finally, you're in my hands." He says he'll accept his fate, but begs her to spare Adalgisa.

Over the centuries, opera composers and librettists have created scores of spectacular roles for sopranos. And of all the great soprano roles in operatic history, there's one that may cover more dramatic territory, and demand more of those who perform it, than any other.

The title character in Vincenzo Bellini's Norma is a woman with emotions ranging from haughty and demanding, to desperately passionate, to vengeful and defiant. The singer who portrays her must convey all of this while also tackling some of the most vocally torturous music ever composed. And that challenge has become even more difficult over time. In Bellini's day, many opera houses were smaller than the massive theaters so many modern companies occupy, and orchestras were smaller as well -- giving singers less space to fill and fewer instruments to compete with. Now, with halls that seat thousands and hundred-piece orchestras, operatic voices have grown as well. The singers who originally performed operas such as Norma may not have thrived in today's operatic world.

Still, there's another fairly recent trend that's changing things. Within the past few decades, specialty orchestras have evolved, which play what are known as original instruments. Generally, these are smaller ensembles, using instruments similar to those of the 17th and 18th centuries. It's now common to hear original instruments in performances of baroque music -- including opera -- and in classical, and even early romantic symphonies -- including works by Beethoven, Schubert and Schumann.

The trend isn't so common in performances of 18th-century opera, even though Beethoven and Schubert were writing their later symphonies at the same time Bellini was becoming one of Europe's most famous opera composers. But now, with productions such as the one featured here, that's changing.

On this edition of World of Opera, host Lisa Simeone presents a performance of Norma, from Warsaw, featuring soprano Katia Pellegrino in the title role. Her voice may not be as powerful as some of those we've come to associate with the role. Nonetheless, it's beautiful, and she and the rest of the cast have something else going for them, as well: The orchestra accompanying them is the acclaimed original instruments ensemble Europa Galante, led by conductor Fabio Biondi.

The resulting sound is a fascinating contrast to the lush opera productions often heard in today's theaters. With less volume coming from the orchestra, the voices are heard with less strain and more clarity, arias and ensembles gleam with an almost crystalline timbre, and the innate delicacy of Bellini's music shines through.

The performance is part of Warsaw's 2010 International Music Festival, and along with Fabio Biondi, Europa Galante and Katia Pellegrino as Norma, it features soprano Lucia Cirillo as Adalgisa and tenor Gregory Kunde as Pollione.

The Story Of 'Norma' 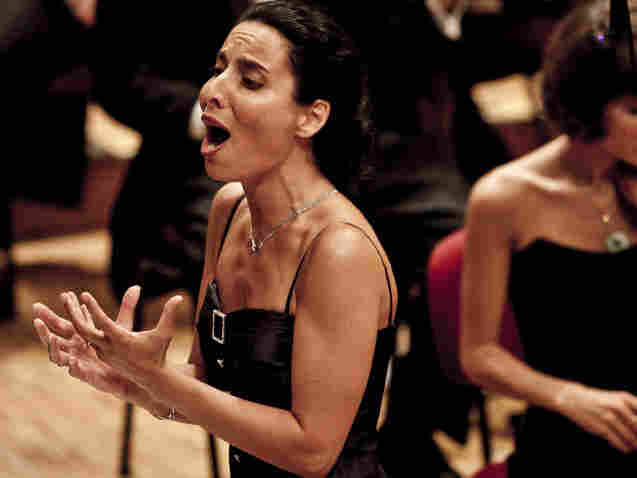 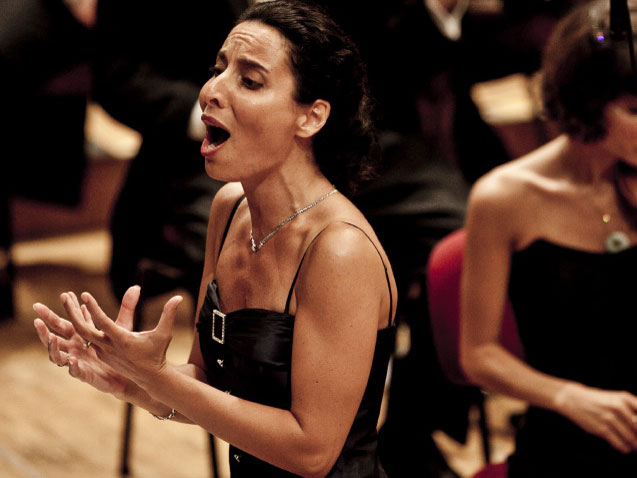 ACT ONE: The action takes place in ancient Gaul, under Roman occupation, where the Druid priestess Norma has fallen in love with a Roman official named Pollione and has secretly borne him two children. Norma is also the daughter of the Druids' leader, Oroveso.

As the action begins, Oroveso instructs his followers to go into the sacred forest and wait for Norma, who will signal the start of a planned revolt against the Romans. When the Druids leave, we find Pollione talking with the centurion Flavio. Pollione admits that he's no longer in love with Norma. His new romantic interest is the young acolyte Adalgisa, one of Norma's temple virgins. In the forest, a brass gong sounds. Pollione and Flavio leave, and a chorus announces the arrival of Norma.

As she cuts the sacred mistletoe, Norma sings the classic bel canto aria "Casta Diva," a prayer to the goddess for victory over the Romans. The Druids follow Norma off, leaving Adalgisa alone to struggle with her emotions. She's torn between her love for Pollione, and her loyalty to Norma and her sworn duties. Pollione joins Adalgisa and begs her to elope with him to Rome.

The second scene takes place at Norma's home. She tells her friend Clotilde to hide her two little boys -- the sons Norma had with Pollione. She's afraid of her ambivalent feelings toward them: "I love, and at the same time, hate, my children," she says.

Adalgisa pays a visit to Norma, asking to be released from her vows. She admits she's found love, though she doesn't say with whom. Norma is touched, remembering her own early days with Pollione. She agrees to release Adalgisa from her vows. But when Pollione arrives, the truth comes out. Norma realizes that he has betrayed her with Adalgisa, and Adalgisa learns that Pollione had pledged himself to Norma.

The act closes in a fiery confrontation. Norma curses Pollione, saying "My burning fury will engulf you like the wind and the waves." She orders Adalgisa to go with him. Adalgisa tells Pollione she'd rather die than desert her people.

ACT TWO: So far, Norma has come across as an unpredictable and even dangerous woman. Now, we find her sounding vulnerable and filled with doubt -- and with a knife in her hand. She's still angry with Pollione and contemplates killing their two young sons. She raises her dagger over the sleeping children, but at the last moment backs down.

Norma calls for Adalgisa, and tells her to take the children and go live with Pollione in Rome. In a spectacular duet, Adalgisa says she won't do it. Instead, she'll tell Pollione of Norma's suffering, hoping that will move him to come back to Norma.

The scene changes to the sacred forest. Oroveso tells his Druid warriors to keep their anger for the Romans in check. They must wait for just the right moment to attack. They leave, and Norma is alone with Clotilde, who tells Norma that Adalgisa has failed to change Pollione's mind. He still loves Adalgisa, and plans to carry her off to Rome.

Norma is furious. "The traitor will go too far," she says, "but I will strike first, and Roman blood will flow like water." She runs to the altar and strikes the ceremonial brass shield, summoning the troops to battle.

In the commotion, an intruder is discovered within the Druid temple. It's Pollione. The punishment for any outsider entering the temple is instant death, and Norma is poised to kill him with the sacred dagger. But she hesitates, admitting to herself that she can't go through with it.

Taking Pollione aside, Norma offers him freedom if he will leave Adalgisa. But Pollione refuses, saying he'd sooner die. Norma says she'd be delighted to arrange for that and for the death of their two young sons, plus the death of his beloved Adalgisa. Pollione begs Norma to spare Adalgisa's life.

Suddenly, Norma calls for her people, announcing that Pollione won't be killed after all. Instead, there's a new victim, one who has betrayed her country. "I am the guilty one," she says and then calls for the sacrificial pyre to be prepared. The crowd tries to bring Norma to her senses, but she won't budge. She's determined to go down in flames. In her final words to her father, Norma admits that she is the mother of Pollione's children and asks the shocked Oroveso to protect them. Meanwhile, Norma's bravery revives Pollione's love for her. He steps to her side, and the opera closes as the two walk into the flames together.