Accessibility links
Lifelong Immunity? With Vaccines, It Depends Vaccines have been wildly successful in taming killers like polio and measles, but some require boosters to stay effective. A few parents wonder if getting sick and gaining a natural immunity is better than giving their children vaccines.

At 2:30 on a Tuesday afternoon, moms and babies are gathering at Angela Shogren's townhouse in Alexandria, Va. As the babies try to crawl across the basement floor, the moms talk about breastfeeding and lack of sleep. One issue keeps coming up: vaccines. 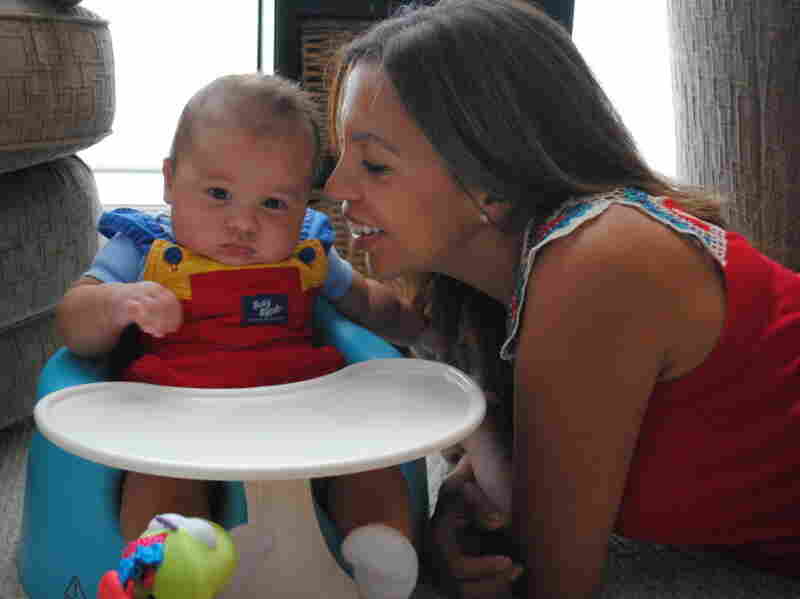 Vanessa Vohden, mom of 4-month-old Santiago, says she understands the importance of vaccines. She grew up in Peru where she saw kids in wheelchairs as a result of polio. Courtesy of Vanessa Vohden hide caption

"I am from Peru," says Vanessa Vohden, mother of 4-month-old Santiago. "Polio -- it's still there. I grew up seeing kids in wheelchairs from polio. So I am definitely pro-immunization."

The other moms are pro-immunization, too. But that doesn't mean they don't have big questions about the vaccines their babies get.  They worry about the number of vaccines that the federal Centers for Disease Control and Prevention recommends for children: more than 20 by age 2, including the new recommendation for seasonal flu shots for all children 6 months and older.

Vaccines have tamed killers like smallpox, polio and measles; they may well be medicine's greatest triumph. But newer vaccines, like the ones for whooping cough and chicken pox, don't always give such great protection.

The moms at the get-together wonder if it would be easier on babies' brand-new immune systems to spread those shots out. And they wonder if vaccines for diseases like chicken pox, which usually causes mild illness, are really necessary.

"I think natural immunity for non-serious illnesses like chicken pox may be better than getting the vaccines," says Katie Combs, mother of 6 1/2-month-old Charlotte.

It turns out that there are no simple answers to the question of whether natural immunity caused by exposure to a germ is better than the industrial version. "It varies from vaccine to vaccine," says Samuel Katz, an inventor of the measles vaccine and a chairman emeritus of pediatrics at Duke Medical School.

Protecting Against This Season's Flu

When the H1N1 flu pandemic peaked last fall, many Americans, and especially parents, were left confused and frustrated by the limited quantity of available vaccine. Last year's flu also left a wake of sick children, and many more pediatric deaths from flu than usual. Some 276 children under the age of 18 — most of whom did not receive the vaccine — died from H1N1 in the 2009-2010 flu season, double the number from the previous flu season.

This year, the Centers for Disease Control and Prevention has called for universal vaccination: all Americans over six months of age should be vaccinated, the agency said. Kids who received the seasonal flu or H1N1 vaccine last season will only need one dose of the vaccine this year, while those who were not vaccinated last year will need two doses four weeks apart.

While natural immunity may protect children just as well as a vaccine in some cases, Dr. Roberta DeBiasi, a pediatrician and infectious disease specialist at Children's National Medical Center in Washington, says that's not the case with flu. "The risk of an adverse event if your child gets the flu naturally is markedly higher than if they get the vaccine," DeBiasi says. DeBiasi, a mother of two young kids herself, also is confident that this year's flu vaccine is safe.  "This year we have the benefit of having studied the pandemic [H1N1], so we have data for all the flu strains and there's no risk."

But he still doesn't know why some vaccines work well -- and some, not so much.

"There are at least two systems in the immune function," Katz says. "One is called antibody, and the other is called cell-mediated immunity. And with most infections, we'd like to have both of those active."

The human body uses those immune systems to fight off viruses and bacteria. Once those systems are activated, they can remember the bugs and stand ready to fend off new infections for years -- or even for a lifetime.

But other vaccines, whether because of the nature of the microbe or the vaccine itself, don't confer lifetime immunity. The vaccine for pertussis, or whooping cough, is one of those.

"We're seeing right now in California, where they're having a large outbreak, that a number of cases are individuals who've received the vaccine," Katz says.

Giving Some Vaccines A Boost

Chicken pox is another example of a vaccine that doesn't work as well as doctors wish. After one shot of the vaccine, which was licensed in the United States in 1995, about 25 percent of children were still spreading the varicella virus around, or getting sick themselves. Anne Gershon, a chicken pox expert who is director of the division of pediatric infectious disease at Columbia University Medical Center, says, "We really need boosters of vaccines much more than we thought we ever would."

So in 2006, the CDC recommended that a second chicken pox shot, to be given when children are 4 to 6 years old, be added to the list of childhood vaccines. Gershon says it looks like that second shot will keep children from getting sick. But the varicella virus that causes chicken pox is a wily bug. Even with the vaccine, it may hide out in nerves for years, and return to cause the painful rash of shingles.

"I don't think we'll ever completely get rid of the virus," Gershon says. "But we can make a lot of difference with how much really severe disease that we see."

Gershon understands why parents like Combs wonder if the chickenpox vaccine is worth the trouble. Before the vaccine, deaths from chickenpox were rare: about 100 people a year. Rare but serious complications include pneumonia and infections with streptococcus A flesh-eating bacteria, which can enter the skin through chickenpox sores.

Even though the vast majority of chickenpox cases were mild, Gershon says, "I think it's important to keep in mind with these infections that we look not only at dying, but suffering from the virus."

But even pro-vaccine parents like the mothers at the Alexandria meet-up wish that pediatricians and the CDC would acknowledge that all vaccines are not the same.

Kiersten Petrucci went to three pediatricians before she found one who would let her delay some of the shots for her son Collin.  She wishes that more physicians were willing to educate parents about the importance of vaccines, but also work with parents and their concerns.

"Not by ramrodding it and saying you absolutely must follow the CDC guidelines. That's my hope," she says

Her pediatrician agreed to let the family skip the rotavirus vaccine for Collin, figuring that she could help them treat the stomach flu and diarrhea it causes. And they agreed to delay the hepatitis B vaccine, and space out other vaccines so that Collin wouldn't be getting as many as four in one day. He's now a happy, healthy 5-month-old. And his mom is happy that she had some control over his vaccines.