Accessibility links
Football's Brain Injury Lessons Head To Battlefield Experts say mandatory rest and evaluation is critical in combat because of new discoveries about the way energy from an explosion appears to reach and damage the brain. The goal is to prevent fighters who've had one concussion from suffering another. 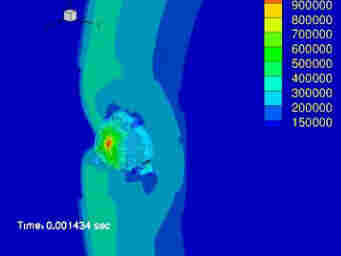 Experts on brain injury are trying to take what they've learned on the football field and apply it to the battlefield.

That will mean identifying military personnel who have suffered a concussion, and forcing them to rest until their brains have a chance to heal.

The approach is similar to what happens in the NFL -- players who suffer a concussion may be benched for a week or more, even if they object.

Brain injury experts say mandatory rest and evaluation are even more important in combat because of new discoveries about the way energy from an explosion appears to reach the brain and cause damage. The goal is to prevent fighters who have already had one concussion from suffering another while their brain is still especially vulnerable to damage.

That's what happened to Jake Mathers, a Marine, during one seven-month tour in Iraq. Mathers got his first concussion during a firefight near Ramadi. He was firing his weapon when an enemy truck packed with artillery shells and gasoline exploded not far from him.

Sgt. Victor Medina suffered brain damage when an IED hit his truck in Iraq. Even after he was diagnosed with a traumatic brain injury, he found he had to fight to get adequate care.

"All I saw was sparks, and then I went out like a light," says Mathers. "I woke up and my nose was bleeding, my ears was bleeding, my tear ducts were bleeding." Mathers' body was intact, though. So he stayed with his unit and suffered more concussions.

"There were several," he says. "An RPG hit my truck one time. I got knocked out. Another time, we're going down this street called Ice Cream -- probably the worst street in Ramadi ... and one of the guys shot an RPG and it hit the hood of our vehicle and blew up."

Mathers says he can't remember how many concussions he had during his seven-month tour, and he has trouble remembering a lot of things now that he's back home in Monroe, La.

"I'll lose my pack of smokes like three or four times a day, and I'll buy different packs of smokes 'cause I forget that I bought them," he says. "Or sometimes I'll be driving down the road and forget where I'm going or lose my car keys, cell phone."

Concussion From A Blast Wave

The conflicts in Iraq and Afghanistan have produced a lot of people like Mathers -- people who had multiple concussions in a short period of time, says David Hovda, who directs the Brain Injury Research Center at UCLA. Each injury is usually the result of a relatively small explosion, he says.

It makes me a little mad. People are like, oh well, you seem fine. Well, you know, I'm not. It's not like I'm missing a leg. But I'm missing something that I can never get back.

The blast can produce "a concussive wave, or a blast wave, that actually moves the head and body very violently and that can, in fact, cause a concussion," Hovda says.

Brain scans show that for days or even weeks after an injury like this, the brain's metabolism slows down, which leaves some cells starved for energy, he says.

"During the time when this metabolism is altered," Hovda says, "the brain not only is dysfunctional, but it's also extremely vulnerable, so that if it's exposed to another mild injury, which normally you'd be able to tolerate really well, now there can be long-term devastating consequences."

It's the second hit or the third that often does the lasting damage, Hovda says. So Hovda and others have been urging the military to act more like the NFL and order troops off the field when they've had a head injury.

That message seems to be getting through.

A few months ago, Adm. Mike Mullen, the chairman of the Joint Chiefs of Staff, announced that troops near a bomb blast must be removed from combat for 24 hours and must be checked for traumatic brain injury.

Implementing this policy is important for several reasons, Hovda says. One is that concussions often cause fuzzy thinking.

"If you're going to call in a mortar strike," Hovda says, "you have to do some fancy math and some really sophisticated calculations in your head, and you could create a problem if this isn't done correctly."

Another reason to aggressively look for brain injury is that it's very hard to tell who might have sustained one, experts on brain injury say. Experiments on animals show that shock waves from a blast can cause brain damage even if the head is completely protected, says Ibolja Cernak, who studied brain injuries on the battlefields of Kosovo. Now she works at the Johns Hopkins University Applied Physics Laboratory in Maryland.

Coroners in Northern California are farming out thousands of cases each year to a private firm whose doctors have dissected the wrong body and have given inaccurate testimony that helped send an innocent person to jail.

Shock waves from a blast compress the abdomen or chest wall violently, Cernak says, transferring the bomb's kinetic energy to blood and other fluids.

"So this kinetic energy now inside the body generates oscillating pressure waves which travel everywhere -- to the organs, but also to the brain," she says, where they may kill or damage brain cells.

Shock waves also can reach structures deep in the brain that control things like blood pressure, balance and speech, Cernak says. And she says the blast can cause a breach in the blood-brain barrier, which usually protects the central nervous system from substances that could cause dangerous inflammation.

"These inflammatory molecules and mechanisms start to give irreversible damages and changes in the brain very comparable to Alzheimer's," Cernak says.

Studies suggest that repeated injuries in a short period of time greatly increase the risk that will happen.

Until recently, concussions on the battlefield didn't get that much attention. Jake Mathers, the Marine, says that's probably because they don't leave any visible scar.

"It makes me a little mad," he says. "People are like, oh well, you seem fine. Well, you know, I'm not. It's not like I'm missing a leg. But I'm missing something that I can never get back."

Mathers says he hopes his story will help protect the next generation of fighters.