Accessibility links
Whales Help Fertilize Ocean With Floating Dung When whales poop at the surface of the ocean, they bring nitrogen, an essential nutrient, up from the bottom. Fish feed off nitrogen-rich algae that grows off the dung, and scientists believe this may play a critical role in the ocean ecosystem. 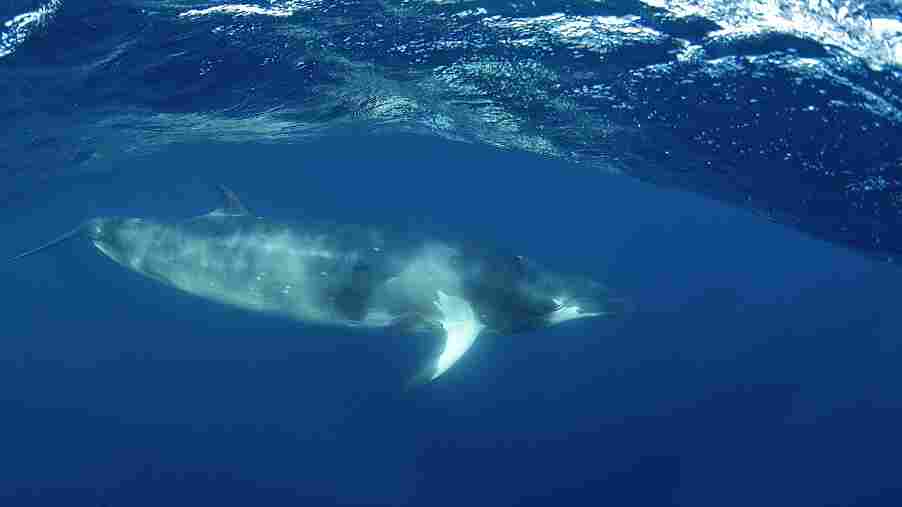 Whales may have a new group of cheerleaders. They've always been popular with marine conservationists, but new research suggests that the fishing industry may also want to adopt the slogan "Save the Whales."

The reason starts with algae. Algae range in size from single-celled organisms to giant kelp plants. Some live near the surface of the ocean, and these algae need nitrogen to grow.

"They need other nutrients as well, but in the system we looked at, the limiting nutrient tends to be nitrogen," says Joe Roman, a conservation biologist at the University of Vermont. "That's the first nutrient they use up."

"Whales, on the other hand, often feed at depth," says Roman. "So they feed low in the water column. And they're consistently seen pooping at the surface."

How does Roman know whales poop at the surface? Because he went out and watched.

"And we were following the whales and collecting feces whenever there was poop at the surface," he says.

This diagram shows how nutrients from whale dung move through the ocean ecosystem. Courtesy of the University of Vermont hide caption

toggle caption
Courtesy of the University of Vermont

This diagram shows how nutrients from whale dung move through the ocean ecosystem.

Courtesy of the University of Vermont

The difference between whale poop and fish poop is that whale poop tends to float, or at least stay near the surface.

This is significant, because when Roman took the whale poop back to his lab, he found it was rich in nitrogen. So the whales were bringing that essential nutrient that had sunk to the bottom back to the surface.

"So, essentially, by defecating at the surface, they are fertilizing their own areas where they are feeding," he says.

Not only were there more algae, there were also increased numbers of fish. That's because fish thrive on algae.

Roman says the finding that whales may be helping to feed their fishy friends comes as something of a surprise.

"Often whales are seen by some communities as competitors," says Roman. "Here, we're showing that whales can actually provide a service."

This isn't the first time scientists have suspected that whales and large fish play a role in moving nutrients from one part of the ocean to another.

"The real question is whether this is a net gain in the system, or what the whales are really doing is just speeding up the cycling," says Andrew Pershing, a research scientist at the Gulf of Maine Research Institute and the University of Maine.

Winds or storms can move nutrients from the bottom of the ocean to the surface. Nobody knows yet how much of a difference the whales really make.

"It's a lot like an accounting problem," says Pershing. "Are you just sort of trading money around within your local economy, or is there actually a net increase in the GDP?"

In this case it's not money we're talking about, but manure -- or nitrogen, if you want to get technical. Pershing says Roman's work is bound to get scientists thinking more about the role of large marine mammals in ocean ecosystems.