Accessibility links
American Editor Brings U.S. Savvy To Jihad Outreach Samir Khan, a former North Carolinian, is believed to be behind an al-Qaida English-language magazine released this summer with snazzy articles and headlines. The magazine sparked a frenzy of activity among counterterrorism officials in Washington because it seemed so American. 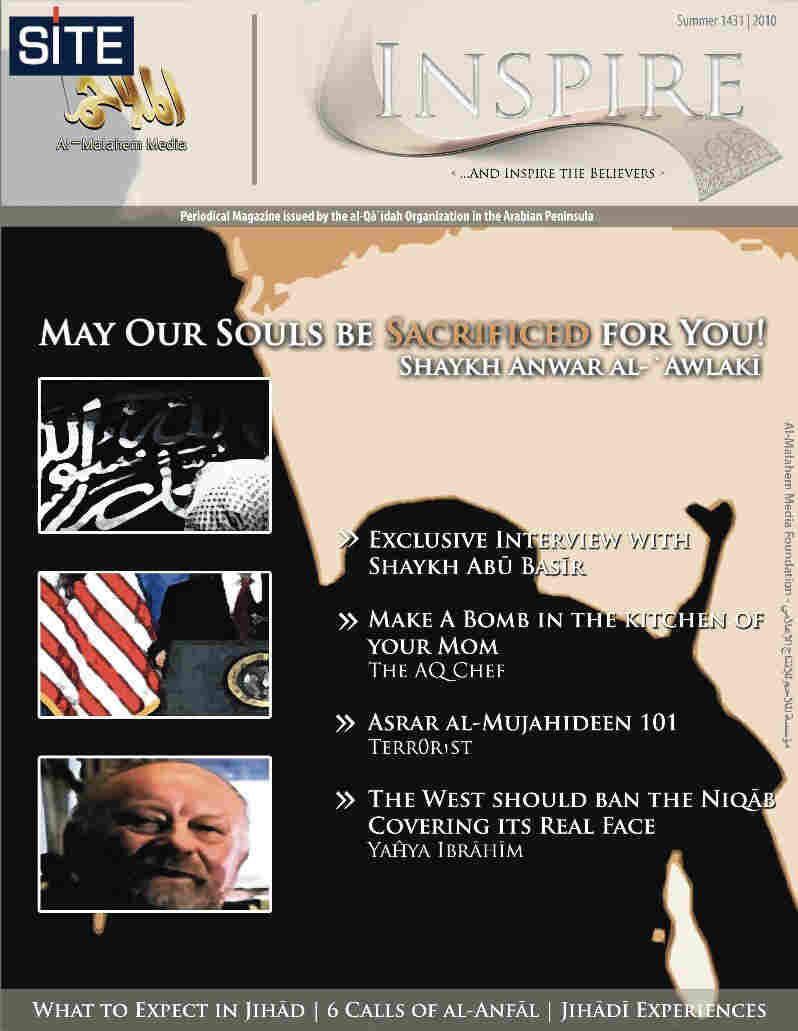 Al-Qaida's arm in Yemen released Inspire, an English-language online magazine, this summer. Focused on terrorism, it was notable for its Western editorial sensibility. Former North Carolina resident Samir Khan is believed to have had a role in creating the publication. AP hide caption

A new issue of the online magazine Inspire -- from the Yemeni group al-Qaida of the Arabian Peninsula -- has some alarming advice for would-be terrorists: Open fire on lunch-hour crowds in Washington, D.C., to "knock out a few government employees."

When al-Qaida's arm in Yemen first released the English-language magazine this summer, the news was all over talk radio in Charlotte, N.C. It was such a hot topic because the man allegedly behind it had been a local resident -- 24-year-old Pakistani-American Samir Khan.

The magazine sparked a frenzy of activity among counterterrorism officials in Washington because it seemed so American. Written in colloquial English, Inspire magazine had jazzy headlines and articles that made it seem almost mainstream -- except that they were all about terrorism.

"Make a Bomb in the Kitchen of Your Mom," reads one headline. Unsure what to pack when you leave for jihad? The magazine helpfully provides readers with a list.

"The concern is that this magazine will reach kids who have never really been very interested in violent jihad before," says one counterterrorism official who has been tracking Khan for years. "The magazine seems to make it fun and accessible. It used to be to get into this you needed to speak Arabic. Now you don't -- English subtitles, English translations of extremist videos, that's the norm now."

Officials believe Khan had a hand in the magazine because its articles track very closely with articles that Khan had published a couple of years ago, when he launched a pro-al-Qaida blog shortly after his father's job transferred him from New York City to Charlotte.

Jihadist In The Suburbs

The Khan family lives on a side street in a relatively new subdivision off Interstate 85. All of the houses have two- and three-car garages, with columns bookending front doors, and lawn services that turn each yard into neatly manicured postage stamps of green.

In his parent's basement, Samir Khan created one of the most popular al-Qaida websites on the Internet. It got thousands of hits a day. He called it "InshallahShaheed" -- or "A martyr, if it is God's will" -- and it appeared in late 2003.

Among other things, it became a platform for Khan to rail against the wars in Iraq and Afghanistan. He talked about the "hellfire" that awaited the American occupiers and disbelievers. He said America was being crushed by Muslim fighters but would never admit its defeat.

While he talked tough on his blog, friends remember Khan as a teenager who was awkward and shy and often spoke with a stammer. They also remember someone who arrived in Charlotte with an agenda. They say Samir Khan was obsessed with political Islam.

"I remember we went to eat at this place called Wolfman Pizza, and he was sort of talking to me about his ideas on some things," says Adam Azad. He met Khan shortly after he moved to North Carolina, and found Khan a little off-putting.

Azad recalls that during their first conversation, all Khan wanted to talk about was political Islam.

"I thought he was a little overzealous. He kept asking questions about our local mosque, and he was critical -- why don't they talk more about injustices going on around the world and stuff like that," Azad says.

Azad, in his early 20s at the time, tried to counsel him: "I remember the exact thing I said to him: I said, you know, Samir, in this world you can't take a hard and cold stance on everything -- everything is not black or white."

He says Khan was quiet and glowered in response.

"I could tell that he wasn't receptive to what I was saying," Azad says.

People who knew Samir Khan say in retrospect it was clear that he arrived in North Carolina with a plan for how to spread his radical message. Within weeks of moving to Charlotte, he hired a local lawyer. He wanted the lawyer to tell him about the First Amendment. How far could he go on a website without running afoul of the law?

In Islam we're told to support our brothers whether they are right or wrong, and how do you support them if they are wrong? Well, you hold their hand or you try to correct them.

Jibril Hough, a Muslim friend of Samir Khan who tried to convince him to distance himself from radical Islam

In a memo, the lawyer laid out what to do, intelligence officials say. Basically, Khan could say anything he wanted as long as he didn't incite violence. And, officials say, he followed that advice.

Norman Ali Khan (no relation) was a teacher at a mosque in New York City; Samir Khan was one of his students. He says it surprised him that Khan thought to hire a lawyer -- partly because he wasn't sophisticated enough to think of something like that, and partly because just hiring a lawyer flew in the face of all of the things Khan said he hated about America.

"It isn't really part of his world view," Norman Ali Khan says. "For him to take shade under the Constitution or to go to a disbelieving lawyer and ask for his help contradicts the entire ideological worldview that he has decided to live by."

Norman Ali Khan says he thinks someone must have put Samir Khan up to it: "I don't think he did that himself."

Samir Kahn published his website and blog and managed to stay on the correct side of the First Amendment. He posted gory photographs of dead American soldiers in Iraq; he cheered setbacks in Afghanistan. He lauded attacks by al-Qaida.

As the Muslim community in Charlotte became aware of Khan's blog, members of the local mosque were appalled. Samir's father tried to get him to stop. To appease him, the younger Khan added a disclaimer to the blog saying the views expressed were not necessarily his own. But anyone who knew Samir Khan knew his true feelings.

Jibril Hough was one of the people in North Carolina who tried to counsel him.

"In Islam we're told to support our brothers whether they are right or wrong, and how do you support them if they are wrong? Well, you hold their hand or you try to correct them," Hough says.

So he brought together elders of the mosque in a kind of intervention, a group that tried to convince Samir Khan to distance himself from radical Islam. That's what makes this part of the story so unusual: The Muslim community took action.

They gathered at Hough's house and invited Samir Khan and his father to join them. They sat in a circle and talked for hours about what they saw as Samir's fundamental misunderstanding of Islam. And they tried to get him to talk to them.

"He mostly just listened," Hough says. "At one time during the conversation, he tried to give some justification for killing innocent people, but it was a very short rebuttal. That's why I thought we were making progress, because he wasn't giving us a lot of argument."

But the intervention, and two other subsequent meetings with Khan, didn't work. He had already decided on another course of action. A short time later, he started telling people at the local mosque that he was going to go to Yemen to learn Arabic and teach English. He boarded a flight to Yemen last October. Al-Qaida's Inspire magazine was published six months later.

His decision to make that trip has taken a toll on Charlotte's Muslim community. Khan's friends say they have been questioned by the FBI. His father's friends say he seems so beaten down by events, they don't have the heart to ask him about his son. As for Khan, a federal grand jury has convened to consider terrorism charges against him. Among them: material support to a terrorist organization.