Accessibility links
Of Montreal Explores 'Groove Bass' On 'False Priest' The band fits the mold of an era where music is becoming increasingly difficult to peg to one genre. Their flamboyant pop has been compared to Sgt. Pepper-era Beatles and Ziggy Stardust-era David Bowie. On their latest album, False Priest, though, they sound more like a 1999-era Prince. 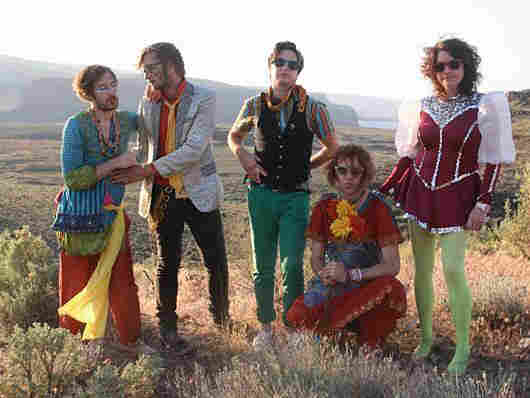 Sasha Frere-Jones of The New Yorker once listed the proclivities of the band Of Montreal: "Sexuality, books, disco, progressive '70s rock, androgynous vocals, the shortest distance between two styles, and the entanglement of clear language and ambiguous feelings."

Of Montreal fits the mold of an era where music is becoming increasingly difficult to peg to one genre. Their flamboyant pop has been compared to Sgt. Pepper-era Beatles and Ziggy Stardust-era David Bowie. On their latest album, False Priest, though, they sound more like a 1999-era Prince.

Lead band member Kevin Barnes, who handles a majority of the production and recording for the band, calls it groove bass music, influenced primarily by '70s funk-era acts such as Parliament, Stevie Wonder, Sly & The Family Stone, and Curtis Mayfield. Bridging these influences with both hip-hop and reggae, False Priest is noticeably more dance-oriented than any of the band's previous albums.

For the first time, instead of relying on his own limited record-producing abilities, Barnes collaborated with seasoned producer Jon Brion -- who produced records for Fiona Apple, Rufus Wainwright, Rhett Miller, Kanye West and a number of others -- to create an album that connected to the listener both intellectually and physically.

"What we were trying to do is create something that has the same organic, joyful, emotive quality those ['70s] records had, but also utilizing the technology we have nowadays," Barnes tells NPR's Guy Raz.

"[Brion and I] were talking about Dr. Dre, A Tribe Called Quest and different hip-hop artists that utilize low-end in a really powerful way to connect to the body, which I think is definitely the goal of groove bass music," Barnes says.

Exhibiting sporadic acts of debauchery and exquisitely designed costumes, their perversely theatrical performances are probably just as radical as their music.

"What we try to do is defeat the static image," Barnes says of the engaging experience. "We don't want it to ever be a situation where people are staring at the same visual image for too long, so we have a lot of different visual events that happen throughout the show."

Of Montreal will be touring overseas this month.