Accessibility links
Images Of N.Y. Islamic Center Meant To 'Educate' In releasing images of the much-debated cultural center planned for Lower Manhattan, the main developer says he wanted to show people what the project is all about. Sharif El-Gamal says the center will include much more than a mosque; a fitness center and Sept. 11 memorial are also planned.

The first images of the much-debated Islamic cultural center planned for Lower Manhattan show a gleaming white tower wrapped in a fine-spun lattice of concrete.

The project has been the subject of a nationwide debate, particularly among those who say the Islamic institution is planned too close to ground zero. But Sharif El-Gamal, the main developer of the contested project, known as Park51, says that as a Brooklyn-born Muslim he sees the project as an opportunity for the country to become stronger. And, he says, the first images released last week will highlight the project's goals.

"Because of the national interest in the project, we felt that we should try to really educate people about what this project is all about and a picture speaks a thousand words, as they say," El-Gamal told NPR's Scott Simon.

The project will include much more than a mosque. El-Gamal says the nearly 120,000 square-foot center will include a Sept. 11, 2001, memorial, an athletic facility and other features. The facility, he says, is tailor-made for one of the fastest growing neighborhoods in New York state where there are "more strollers than briefcases."

"All that we're looking to do is provide a much-needed community center in Lower Manhattan," he said.

The project is far from complete, however. Developers still need to raise more than $100 million, which has raised concerns that some of the funding could come from countries and groups with links to terrorism. But El-Gamal says those worries are misplaced. 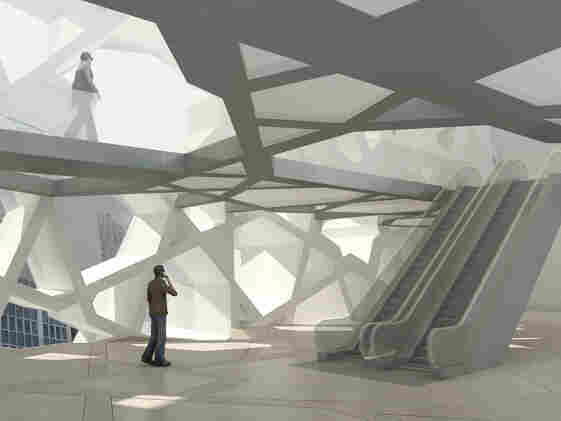 El-Gamal says the opposition to the Park51 project was an eye-opener. And, he says, if he had to do it over again, he would try a different approach.

"If I could go back in time, I probably would have done more of a national campaign because I did not realize that in order to do a project in Lower Manhattan that I needed the permission of the rest of the country," he said.

El-Gamal says the memories of the "horrific events" of Sept. 11, 2001, are a "part of his fabric today." He adds that despite the view that a mosque near ground zero is insensitive, he is convinced that as an American he must exercise his right.

"If we don't exercise our rights, then you start losing your rights," he said. "And I see this as an opportunity for us Americans to re-evaluate our values."

Across The Atlantic, Another Mosque Splits A City Oct. 9, 2010