Accessibility links
Jobless After 50? You May Be Out Of Luck The recession is officially over, but unemployment statistics are still grim — especially for older workers. Some economists, like Nobel winner Paul Krugman, say another big government stimulus is the only thing that will help. Others disagree, arguing that the last few years illustrate the weakness of Keynesian economics. 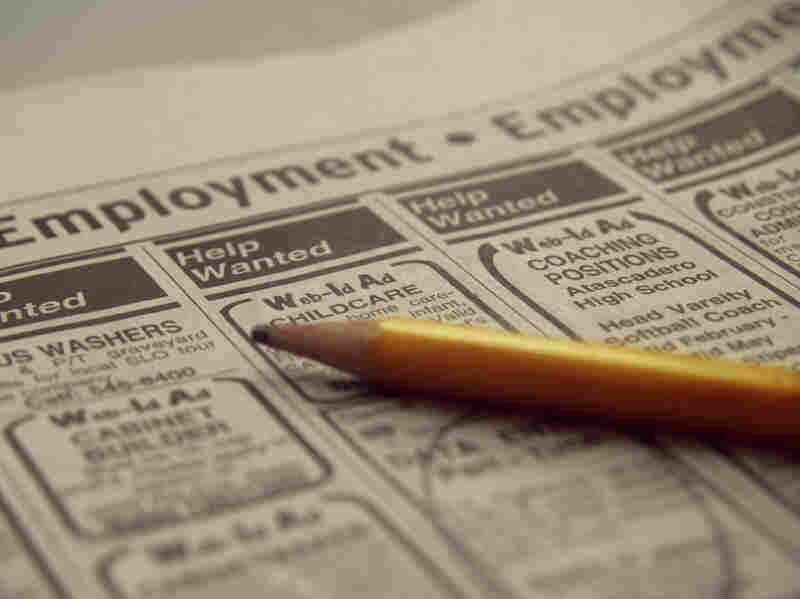 Almost 15 million Americans are out of work. iStockphoto.com hide caption

The economy officially crept out of recession in June of 2009, but for many Americans, the economic markers that really count are the ones that come out each month from the Department of Labor: unemployment statistics.

And the numbers released this week continue to look grim, with almost 15 million Americans out of work and few private sector jobs available.

The typical unemployed worker spends about eight months out of a job, but for people over 50, finding a new job can take a lot longer -- if it happens at all.

From The Boardroom To The Factory Floor

Cyndi Norton has managed to find work. She makes $10 an hour in a California factory. She has no benefits and says she's basically homeless, relying on friends for a place to sleep.  But not too long ago, she was a high-powered administrative assistant at the Rand Corp., sitting in on board meetings and once, memorably, showing Henry Kissinger around the building.

Newly married, Norton decided to quit her job and start a small business. "I had a little savings," she tells NPR's Guy Raz. "I had a 401(k), but not a lot."

Then the recession hit, and Norton's life fell apart. She got divorced, the business failed, and at age 50, she found herself looking for another job.

At first, Norton thought it wouldn't take long. She sent out resumes to old employers, aced interviews, passed tests with flying colors … and never got the job.

"I may not be young, but I'm bright," she says. "But see, I've also heard this from other people -- and from younger people, too -- saying that they have been instructed by their managers at these recruiting firms, 'Yeah, bring her in, interview her, have her take the test.' But for this particular position we're looking for? They don't want anybody over 30."

Norton says her situation is bleak. "I've done everything I possibly can to find work. I've signed up with temp agencies, I've taken all the tests. I'm a nationally certified medical assistant. I tried to retrain -- school loan coming due in December which I can't pay. [I've] basically put ads on Craigslist for everything from caretaker to secretary to house-sitter. ... It's very disheartening, because I know I can do what's required of me."

Many economists came under fire for failing to anticipate the recession. Now, New York Times columnist Paul Krugman is taking aim at his fellow economists again -- this time for not coming up with ways to help people like Cyndi Norton.

"We should have economists out there saying, 'Here's how we're going to return to full employment,' " he says, "not just, 'Oh, here's the mistakes we made getting here,' or 'Here are the things we need to be worried about.' "

Krugman prescribes "a huge dose of both fiscal and monetary stimulus" -- bigger, even, than the $700 billion package Congress approved early last year. "We should be having lots of expansionary policy by the Federal Reserve, a lot more fiscal stimulus than the really massively underpowered measures than we've had so far," he says.

It doesn’t really matter so much what the stimulus money is spent on, he argues, as long as it gets spent. But he does recommend putting some of the money into infrastructure projects. "It's just crazy that we’re talking about possibly canceling a much-needed tunnel under the Hudson at a time when we have mass unemployment, and those construction workers, if not employed building that tunnel, will not be employed doing anything else.”

If the government doesn’t make more stimulus money available, Krugman says, "enormous harm" will come to American families. "You just need to think about how many people are unemployed now for long periods of time. Large numbers of people who have lost their jobs and will never get another if we don't change our policies."

A Backlash Against Keynesian Economics

But not everyone agrees that more stimulus money is the solution. Australian economist Peter Smith tells Raz: "Capitalist economies go into recessions. "That's part and parcel of a system that's made us very prosperous." And, Smith adds, those recessions bring down prices, spurring investment and eventually ending the recession. "The last thing you need in those circumstances is for the government to come in and just be spending all over the place."

Smith says that kind of stimulus spending artificially props up prices that should be falling, creating noise and disruption in the system and damaging business.  "The best thing the government could do," he contends, "would be to let the private sector adjust its way out of this recession."