Accessibility links
Glenn Beck: Reading Between The Coded Lines Washington Post columnist Dana Milbank says there's a phrase in Glenn Beck's rhetoric that may have a particular meaning to a small percentage of Latter-day Saints: "The Constitution is hanging by a thread." 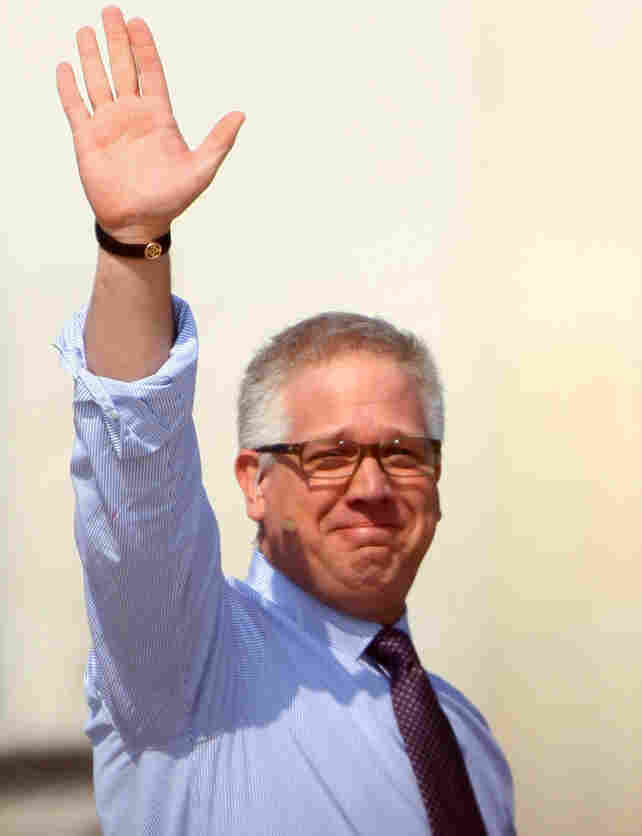 When Jon Stewart famously parodied Glenn Beck earlier this year, the Comedy Central host zeroed in on the ways Beck sees hidden meanings or conspiracies in the policies or statements of his political targets.

Stewart stood before a Beck-sized chalkboard with the word "libertarian" written in big block letters.

"Lie! Lie! Lie!" Stewart yelled, pointing to the first syllable of the word. "Who's doing the lying? Tell me, word on the board!"

Stewart paused dramatically. He turned to the board and circled the last two syllables of li-bert-arian. "Aryans!" he yelled.

Now, in a new book, it's Glenn Beck's words that are being culled by Washington Post columnist Dana Milbank.

One of the trademark Beck lines that Milbank deconstructs is "the Constitution is hanging by a thread."

In the book Tears of a Clown: Glenn Beck and the Tea Bagging of America, Milbank says that line is a veiled reference to an obscure Mormon prophecy that Latter-day Saints will rescue the country from certain doom. It's known as the White Horse Prophecy.

Only a handful of members of the Church of Jesus Christ of Latter-day Saints are aware of the "White Horse Prophecy," according to Utah State University professor Phil Barlow, who teaches Mormon history and culture.

"And among that minority, very few would be able to explain what it actually refers to," Barlow tells NPR's Guy Raz.

The prophecy originates with the diary entry of an LDS church member, who scribbled the following quote and attributed it to Joseph Smith, the founder of the Mormon Church:

"You will see the Constitution of the United States almost destroyed," the diary quotes Smith as saying.  "It will hang like a thread as fine as a silk fiber."

Whether that quote actually came from Joseph Smith, Barlow says, is difficult to prove. But the language itself?  "That phrase, Latter-day Saints would have heard of."

"It's actually a fairly benign prophecy," Milbank tells Raz. According to Milbank's research, "they're talking about restoring law and order and peace and tranquility," he says.  "It doesn't sound like a violent thing."

Milbank emphasizes that any Latter-day Saints who believe in the "White Horse Prophecy" or its coded foretellings would be viewed as fringe within the church.

"I think that in many ways, Glenn Beck has picked up some of the more obscure -- and more extreme -- work of Mormon thinkers," he says.

There's no denying Glenn Beck has used the phrase "the Constitution is hanging by a thread." In fact, he's been saying it at least since Nov. 4, 2008.

"We are at the point -- or we are very near the point -- where our Constitution is hanging by a thread," Beck told a guest on his radio show, Utah Republican Sen. Orrin Hatch, who is himself a Mormon.

"You got that right," Hatch replied.

Milbank says that exchange and others like it could be coincidental. "Except that it's a phrase Beck has used repeatedly over time," he continues. "He is the guy who sees himself -- and his followers -- as rescuing the Constitution that is hanging by this proverbial thread."

The Revolution Will Not Be Coded

Barlow, the Utah State professor, agrees that Beck's use of "hanging by a thread" is likely not coincidental.

But is he trying to deliver a secret coded message to his followers that an uprising is nigh?

Barlow says Beck is making conservative arguments by "drawing on this element that runs through Mormon consciousness."

In other words, using the parlance of one's church does not a secret conspiracy make.

"I didn't write about it as if there was something wrong with it," Milbank says.  "I just think it's interesting that he's saying these things that would be heard one way by one audience, and by probably 95 percent of the people -- it would go completely over their head."

And indeed, for a certain LDS audience, Beck is appealing. Barlow has a laundry list of other Mormon ideals to which Beck commonly alludes.

"He talks about a God of miracles," Barlow says. "That's certainly a Mormon theme."

There's also the family as the basis of society -- "not unique to Mormonism but distinctively sharp in Mormonism," Barlow says. There's the importance of storing food and necessities for any calamities; tithing one's income; the Constitution as a divinely inspired document; freedom and personal responsibility -- all ideals Beck espouses frequently.

"There's a lot of things," Barlow says, "where his personal views intersect with Mormonism or draw from Mormon imagery or language or principles."