Accessibility links
A Parkway Built When Stimulus Money Was Popular These days, public works projects are meeting with opposition from politicians and voters across the country. It wasn't always this way. Many of the country's bridges, dams and roads — among them the Blue Ridge Parkway — wouldn't have been possible without public support

New Jersey Gov. Chris Christie became a hero to fiscal conservatives this past week when he dropped a bombshell.

A state commission concluded that a planned rail tunnel connecting New Jersey to New York could cost as much as $5 billion more than originally estimated. Christie then announced the termination of the tunnel's construction, which would have been the largest infrastructure project in America.

Across the country, politicians are making similar declarations. In California and Wisconsin, Republican gubernatorial candidates are vowing to cancel high-speed rail projects in their states as laid out in President Obama's stimulus package.

All of them make a similar point: The plans are unaffordable. Polls in both of those places show that voters agree. But America's political climate wasn't always so hostile to expensive infrastructure projects.

Indeed, many of the country's roads, bridges and dams constructed decades ago wouldn't have been possible without public support -- among them the Blue Ridge Parkway. The popular 469-mile road stretches from the southern end of Shenandoah National Park in Virginia to the Great Smoky Mountains in North Carolina. 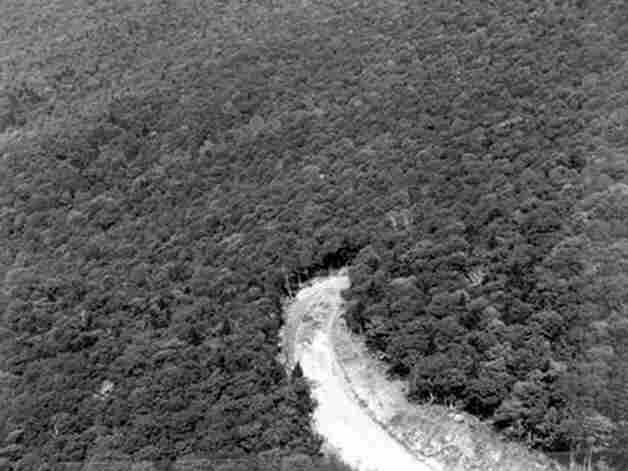 Seventy-five years ago, construction began on the Blue Ridge Parkway, "America's Favorite Drive." The forests, rustic cabins and mountain vistas along the Parkway attract around 17 million visitors each year, making it the most visited site in the National Parks system. But acquiring the land, funds and workers to build the Parkway was no easy feat.

In the midst of the Great Depression, the government was looking for a way to spend money that would stimulate the economy and promote tourism. President Franklin Roosevelt and Interior Secretary Harold L. Ickes campaigned hard for the money to extend Skyline Drive in Shenandoah National Park into the Great Smoky Mountains National Park.

They successfully set aside money to start the construction of the extended Parkway, but the road wasn't completed quickly or easily. It took another 52 years before the final section was completed -- the portion around Grandfather Mountain in North Carolina.

The whole project required gathering more than 80,000 acres of land -- enough to build the road and create a natural border on either side. More than half of that land was purchased from private landowners by the states using eminent domain. While some sold willingly, others resisted and pressed for changes in routing, right-of-way width, or use restrictions.

Could It Be Built Today?

Anne Mitchell Whisnant, author of the book Super-Scenic Motorway: A Blue Ridge Parkway History, tells NPR's Guy Raz that a spirit for great public works in the 1930s kept support for the project going. It's a spirit that doesn't exist these days, she says. 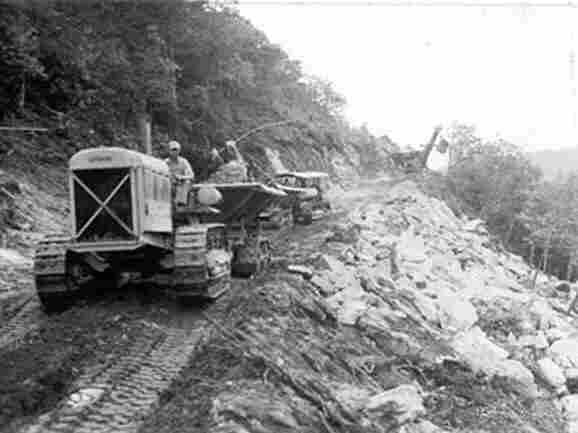 In the 1930s, crews from the Works Progress Administration cleared paths for the roads that became the Parkway. National Park Service hide caption 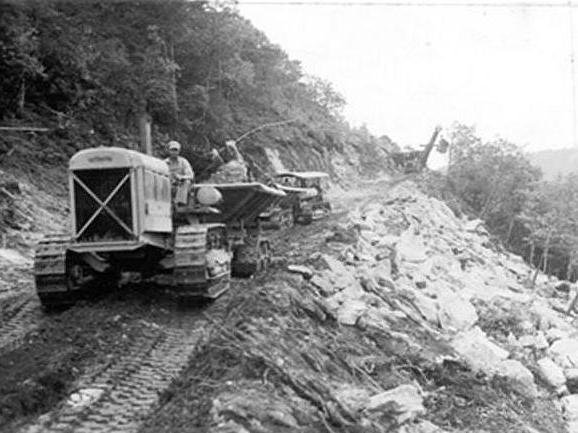 In the 1930s, crews from the Works Progress Administration cleared paths for the roads that became the Parkway.

People often ask her if something like the Blue Ridge Parkway could be built today. Could the federal government convince the public it was a worthwhile investment?

Not likely, Whisnant says. There have been a lot of governmental policy changes since the Parkway was constructed. New requirements such as environmental impact reports and public input periods often kill, or at least slow down, many construction projects. But more importantly, public support for major government projects has declined.

"Our level of faith in the federal government [as] a doer of good for the public is nothing like it was in the '30s," she says. "So in a lot of ways, you look back and think the '30s was this moment in time when things were done that just aren't being done anymore. Not just the Parkway, but all kinds of projects that serve the public."

The Continuing Cost Of Infrastructure

Brian Taylor of the Urban Planning department at UCLA says he isn't so worried about getting major infrastructure projects built today, but is concerned about maintaining the ones already in existence. He helps run a program that educates urban planners about the U.S. infrastructure.

They're surprised "that there is such a crisis to pay for maintaining these things," he says. "The question they often ask us is, 'Why are you doing this when you know down the road this is going to entail substantially more costs to rebuild this infrastructure than if we were maintaining it properly now?' "

In its latest report card on the state of America's infrastructure, the American Society of Civil Engineers gave our system of roads, bridges, sewers, dams and ports a combined GPA of 1.0 -- the equivalent of a "D" grade. Taylor says that bad rating -- and delaying maintenance on the nation's infrastructure -- is only going to result in a much larger bill down the road.