Accessibility links
In Arizona, New National Guard Troops Watch Border The 1,200 National Guard troops President Obama ordered to the U.S.-Mexico border in July are finally in place, nearly half in Arizona, the busiest state for illegal border crossings. But some critics want an even greater presence. 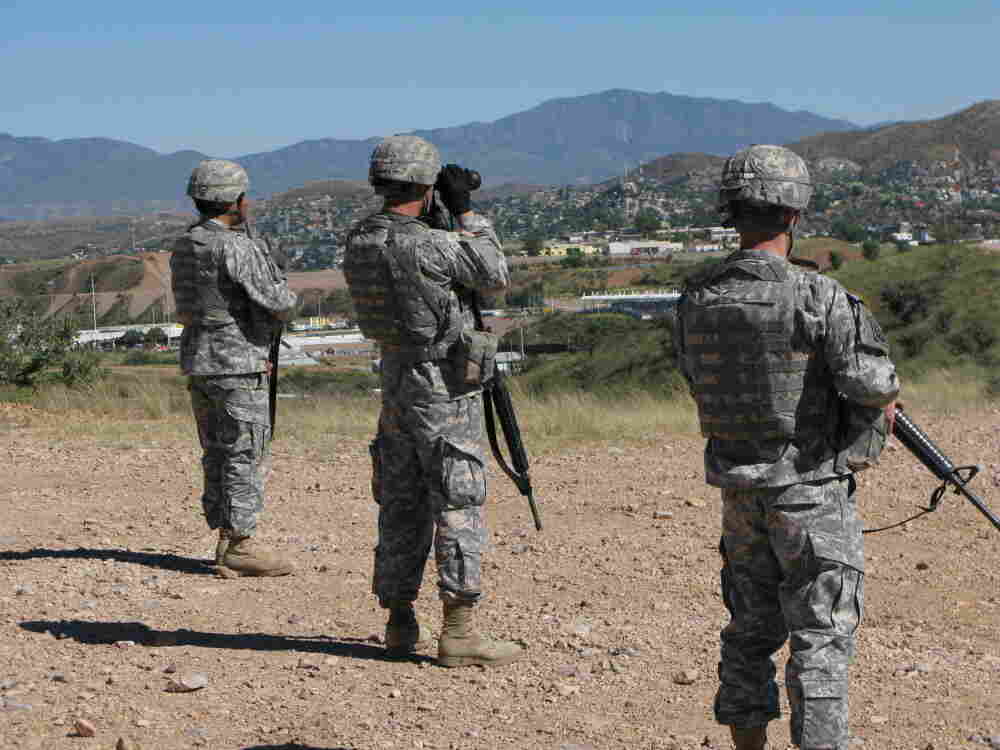 National Guard soldiers stand watch near Nogales, Ariz., over the border with Mexico. President Obama deployed 1,200 troops to the border states in July, nearly half in Arizona. The state is the busiest in the nation for illegal border crossings. Ted Robbins/NPR hide caption

The 1,200 National Guard troops President Obama ordered to the U.S.-Mexico border in July are finally in place, nearly half in Arizona, the busiest state for illegal border crossings.

On a breezy afternoon on a hill west of Nogales, Ariz., four soldiers in combat gear, part of an Entry Identification Team, are standing watch. One is scanning the terrain with binoculars. None agreed to talk with NPR or let us use their names.

Border Patrol agent David Jimarez says this location, about a quarter mile from the border with Mexico, is a popular place to cross. If the soldiers weren't here, he says, there would be a Border Patrol truck clearly visible on this hilltop.

"Now that the National Guardsmen are here, we can free up that additional agent and he can go work areas more remote, more rural," Jimarez said.

The idea, he agrees, is to have them see and be seen.

"They are in a high-visibility posture, so definitely ... they will be seen and that is part of the effect that we want to go ahead and create that deterrence effect," he said.

Four years ago, the National Guard was at this same spot; soldiers built the fence now in place. At the time, 6,000 troops came to the border until the Border Patrol could hire more agents. There are more than 3,000 agents in Arizona now.

Still, some critics want an even greater presence. They say 560 soldiers on Arizona's border are not enough. But, Victor Manjarrez, chief of the Tucson Border Patrol Sector, says the extra eyes and ears are paying off.

"We've seen that in the very short time frame they've been deployed," he said. "The critics point to the number. At no time will I ever turn away a resource.

Manjarrez says the soldiers already have played a role in 400 arrests. When soldiers spot illegal crossers, they radio Border Patrol, which tries to apprehend them. National Guard troops do not make arrests themselves -- another criticism from border hawks. The Guard says the troops are not trained as law enforcement officers, but Col. Jill Nelson of the Arizona National Guard says, they are prepared for danger.

"Every soldier and airman assigned to an EIT site has a weapon, and we authorize under the strict guidelines with the state with the rules of engagement which were established for this mission," she said.

She added that they are authorized to use their weapons for self-defense.

The Border Patrol won't say exactly where the troops have been placed, though there aren't any on the vast Tohono O'odham Indian Reservation -— one of the most porous areas for smuggling.

The troops have been put on or near the Krentz Ranch in southeastern Arizona where rancher Rob Krentz was killed in March, presumably by a drug smuggler. The uproar following that killing spurred the Arizona Legislature to pass an anti-immigration law now being challenged in court. It also prompted Obama to send the troops, which is why the Rev. Robin Hoover, a longtime immigration-rights activist, calls the mission more political than strategic.

"This is a fabulous political ploy to be putting 500 Guardsmen into a depressed economy in southern Arizona, renting hotel rooms and buying gasoline and showing -- just in front of the election -- that the Democratic Party gets it and they want to do some border enforcement," he said.

The National Guard troops are scheduled to stay on the border for a year. That means they will be in place through what is usually the busiest season for crossing: the spring.