Accessibility links
For Runners, Static Stretching May Be Outdated Static stretching -- the bend-and-hold, toe-touching stretches you learned in gym class -- might be a thing of the past. A growing body of research has found runners don't benefit from it, and some experts are advocating stretching that emphasizes gentle, fluid repetitions instead.

Dan Pereles is not only an orthopedic surgeon who treats lots of injured runners, he's also a runner himself. And for most of his career, he practiced and preached the value of the pre-run stretch.

But a few years ago, the Maryland-based doctor started to notice that committed stretchers weren't necessarily preventing injuries -- at least with the type of stretches they were doing. 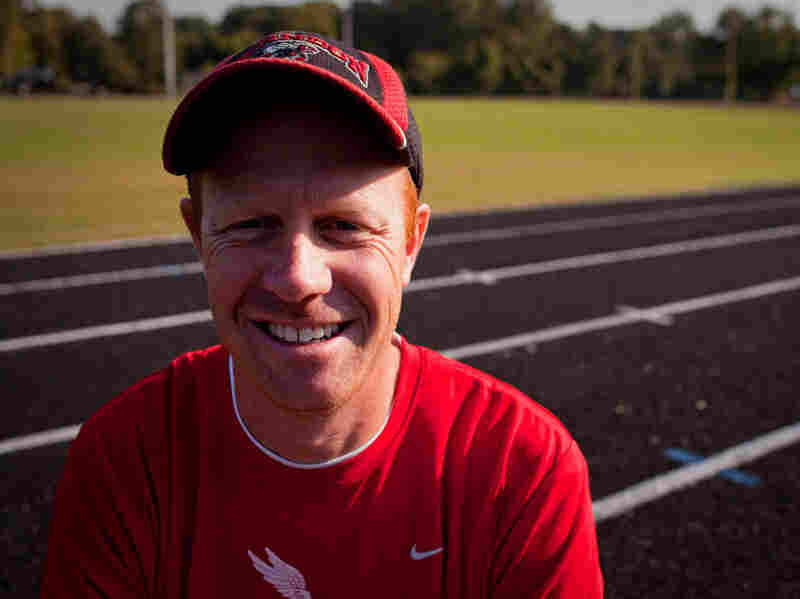 In his recent study, supported by USA Track and Field, he recruited about 3,000 runners and divided them into two groups. One group was instructed to do 3 to 5 minutes of static stretching before each run. That is, they stood in one place and stretched their quadriceps, hamstrings and calf muscles.

"It's the classic way of stretching," Pereles says.

The other group of runners was instructed not to stretch before runs. Both groups had a mix of men and women of different ages who ran varying speeds and distances. At the end of three months, Pereles found that 16 percent of all the runners had sustained an injury. But it turns out the stretchers fared no better than the non-stretchers.

"I was surprised actually that the stretching didn't prevent injury," says Pereles. "But that's just the way it was. There was absolutely no benefit."

At the same time, the researchers in Pereles' study spotted an interesting trend among runners who'd been in the habit of stretching before the study began: Those who were put in the "no-stretch" group sustained more injuries during the three-month experiment.

"So if you're used to stretching, you should still do it," Pereles says. And if you've had prior injuries, stretching seems to reduce the risk of repeat injuries.

This is not the first study to question the value of pre-run, static stretching routines. Another recent study published in the Journal of Strength and Conditioning Research found that competitive runners are less efficient after static stretching.

Pereles says it would be a mistake to conclude that stretching is not valuable. He says the jury is still out on whether a 3- to 5-minute stretching routine is too short to really limber up all the muscle groups in the legs. He says it's also possible that alternative methods of stretching -- such as dynamic, or movement-based, stretching -- may be helpful.

Active-isolated stretching emphasizes gentle, fluid repetitions rather than the typical bend-and-hold stretch. This method may take a little longer than conventional stretching, but Peter Sherry says the value is that he's not pushing the stretch or overextending his joints.

A Coach Who's A Convert

Peter Sherry, the head cross-country coach at Herndon High School in Virginia, says his team doesn't do any static stretching.

"In fact, I don't allow any static stretching on my team -- at any point during the season," he says.

"The best way to think of it is probably flexibility exercises," he says. Rather than "bend and hold," Sherry's method emphasizes a more gentle cycle of 2- to 3-second stretches -- and lots of repetitions.

A Different Way Of Stretching

Lying back on a track, Sherry demonstrates the main differences between traditional "static" stretching and active-isolated stretching. He moves into a bend-and-hold toe touch, reaching his hand out to grab his toe. As he leans forward, he says this stretch is supposed to be targeting his hamstrings, but instead it's overstretching his back.

"If your back is tight or your calf is tight, the hamstring can be neglected -- we're really not getting to it [the hamstring]," he says.

Sherry then demonstrates his method for limbering up the hamstring. As he lies on his back, he moves his leg up toward his chin in a fluid motion, and holds it for just a few seconds.

"Now we do it again, and each time I get a little deeper stretch," says Sherry. "I can feel the muscles stretching."

This method may take a little longer, but Sherry says the value is that he's not forcing the stretch or overextending his joints.

Five years ago, Sherry says he was one of the only runners around preaching about active-isolated stretching. But now when he takes his team to competitions, he sees more coaches are adopting it.