Accessibility links
Remembering 'La Stupenda': Opera Singer Joan Sutherland From the late 1950s up until her last stage appearance in 1990, Australian soprano Dame Joan Sutherland was one of the world's most admired and celebrated opera stars. She died Sunday at age 83. Classical music critic Lloyd Schwartz looks back at the life and work of the singer known as "La Stupenda." 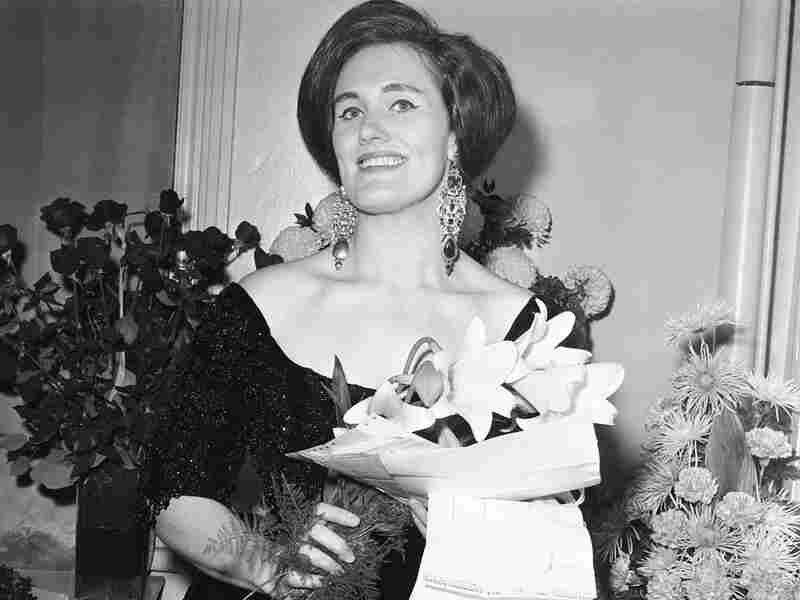 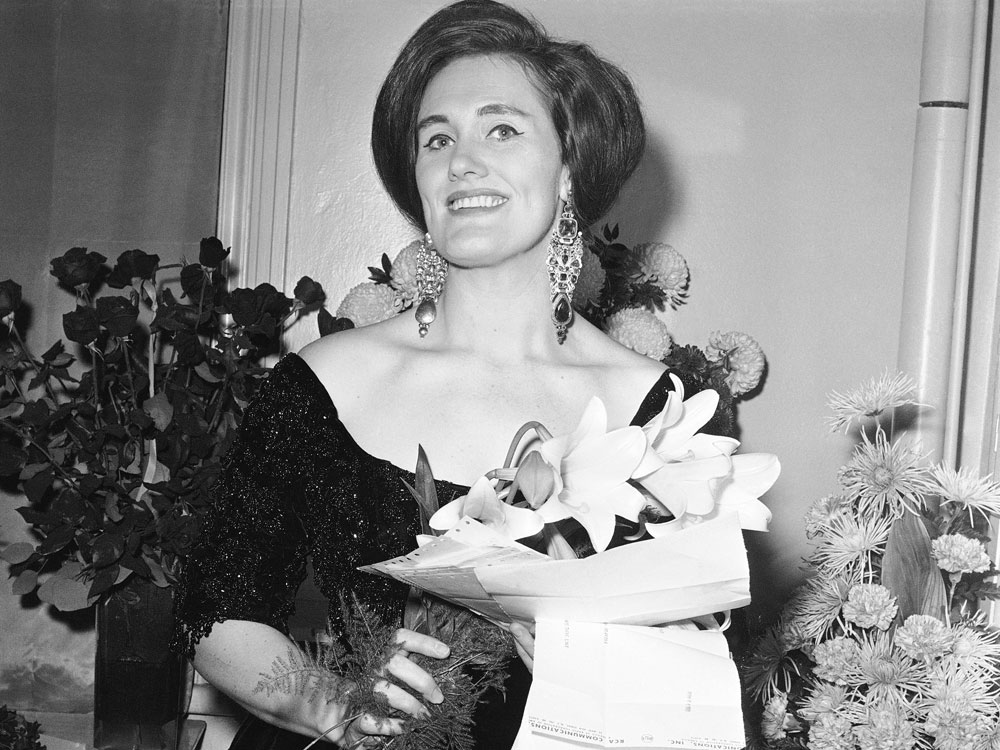 Australian soprano Joan Sutherland poses in her dressing room at the Metropolitan Opera after making her Met debut on Nov. 26, 1961, in New York.

When Joan Sutherland came to Boston on a Metropolitan Opera tour in 1964, in her signature role of Donizetti's Lucia di Lammermoor, a friend and I were sitting in the next-to-last row of the balcony, miles from the stage. Except for Maria Callas, most Lucias had pipsqueaky voices that allowed them to sing the incredible high notes and rapid coloratura trills and roulades this music requires. But the minute Sutherland opened her mouth, we heard something no recording could convey: Her voice was not only a phenomenon of agility, but also amazingly huge -- and warm.

When she hit her high E-flat at the end of Lucia's famous Mad Scene, my friend's eyes literally popped, and he spent the last scene of the opera on all fours searching for his contact lenses. Sutherland had that kind of voice. If you cared primarily about extraordinary vocal qualities, then Sutherland was probably your favorite singer. And, for some years, she was mine. I practically wore out my copy of her famous 1960 double-LP tribute to the great sopranos of the past, The Art of the Prima Donna.

I heard her both in Boston, where she sang some of her major roles for the legendary opera director Sarah Caldwell, and in New York. She was a tall, large-boned woman who moved rather awkwardly on stage, and her acting was more remarkable for its sincerity than for its dramatic subtlety. Some critics complained about her mushy diction. But there was never anything phony or facile about her.

Her technique was rock solid, and along with her husband, the conductor Richard Bonynge, they revived some long-forgotten operas. Her performance of the title role in Handel's Alcina may have triggered a new consideration of Handel operas. Though most of her roles were tragic (she said she loved those "demented dames"), one of her biggest hits was Donizetti's Daughter of the Regiment, which she often sang with a young Italian tenor she encouraged named Luciano Pavarotti, and she proved to be a delightful comedienne. Another unknown singer whose major career Sutherland helped launch was a mezzo-soprano named Marilyn Horne, who'd been kicking around the new-music circuit for some years. She became an overnight sensation when she started singing with Sutherland. One appearance together was at Carnegie Hall in a concert version of Rossini's rarely produced Semiramide, with Sutherland as the Queen of Babylon who's in love with Horne, her commander-in-chief -- who also turned out to be her son. The audience greeted their first duet with stunned silence, a universal intake of breath, and then a 15-minute ovation. The same thing happened after their second duet. Apparently, a later test of their voices discovered an uncanny synchronicity in the pattern of their sound waves. And we just thought it was great singing.

Sutherland had a vast repertoire, from early music and Italian Bel Canto to Wagner and Puccini, French opera and even Noel Coward. Well into the 1980s, she was still taking on demanding new roles. I last heard her in Boston in 1985, in Anna Bolena, Donizetti's opera about Anne Boleyn. In Sutherland's earliest years of fame, no singer I heard thrilled me more. And though I ultimately wanted something more from opera, I never stopped admiring her. She wasn't nicknamed "La Stupenda" for nothing. In sheer vocal size and brilliance, there's never been anyone like her -- and probably never will be.