Accessibility links
'Red': Armed, Dangerous, Downright Smug About It Heavy on the violence and not funny enough to make up for it, Red is an action comedy that tries a little too hard. Though it has a stellar cast (Helen Mirren is a joy to watch), the film ends up feeling a little too full of itself. 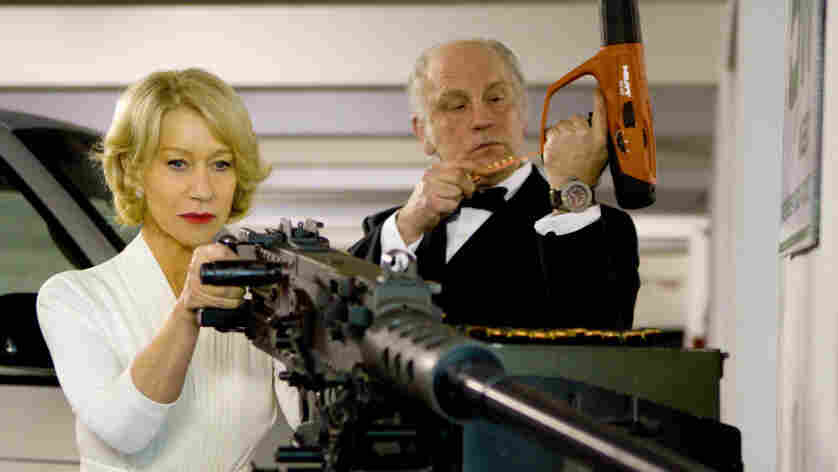 Cool And Collected: Helen Mirren and John Malkovich star as retired CIA agents who join up with their old team when they become targets of the agency. Frank Masi/Summit Entertainment hide caption

'Where Exactly Is The Threat?'

Action comedies don't usually have casts that include Oscar winners. But Red, starring Helen Mirren, Morgan Freeman and Richard Dreyfuss, has ideas above its station.

Now, seeing Mirren let loose with a Gatling gun is an ultimate movie experience; it's like watching the Queen of England lay waste to a crowd of unruly commoners. But it's also the only dark corner of Red that satisfies as it should.

Red is an acronym for "Retired Extremely Dangerous," and here it's a reference to a group of former CIA agents who've been put out to pasture in favor of younger, presumably deadlier, government operatives. Circumstances conspire to bring them together again, with Bruce Willis as ringleader.

The very complex plot starts as Willis is having his first face-to-face meeting with a woman, played by Mary Louise Parker, with whom he's been carrying on a telephone flirtation. Wouldn't you know it, there's an incident, and he's forced to rescue her. She thinks she's being kidnapped.

"Not my best first date," she deadpans. But there's chemistry: "Not my worst, either," she says.

Willis and an increasingly friendly Parker flit around the country, trying to figure out why people are trying to kill them and making contact with old comrades in arms, like Mirren, who's trying to convince herself she's happy being retired. The other actors run hot and cold, but Mirren is most at ease in her role, handling her lines with aplomb and firing automatic weapons like she means it.

The problem with Red is that it can't stop trying -- too hard -- to be hip. Its inescapable air of self-satisfaction is not only unearned, it's downright irritating. A lot of fine actors wander through the mayhem, including Freeman, Dreyfuss, John Malkovich, Brian Cox and even Ernest Borgnine, but not even their combined abilities can make a dent in the film's smugness.

Red is too violent to be a comedy and not funny enough to counterbalance all the violence. It has its moments of machine-gun-toting charm, but there are way too few of them to go around.