Accessibility links
Is Islam A Religion Of Peace? That's how former President George W. Bush characterized it, but some take a different view. A panel of experts takes on the question in the latest Intelligence Squared U.S. debate.

Listen
Is Islam A Religion Of Peace?

Is Islam A Religion Of Peace? 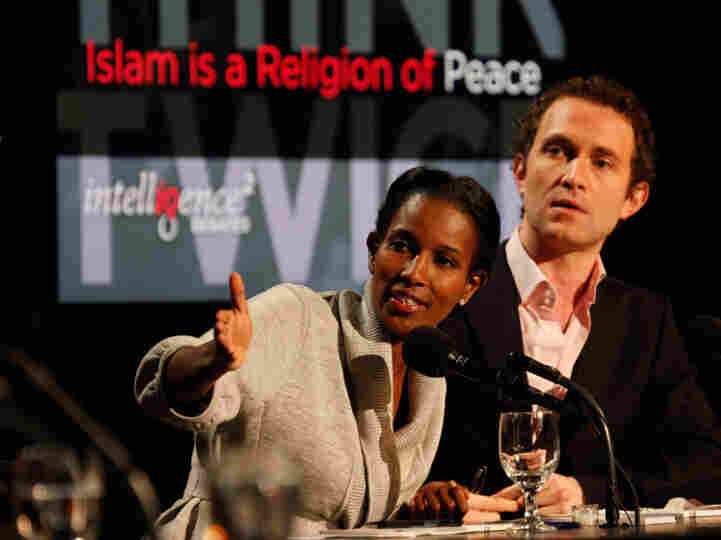 Ayaan Hirsi Ali (left) and Douglas Murray argue against the motion "Islam Is a Religion of Peace" in an Intelligence Squared U.S. debate on Oct. 6 at New York University's Skirball Center for the Performing Arts. Chris Vultaggio hide caption

The Full Audio Of The Debate

In the aftermath of the Sept. 11 attacks, President George W. Bush characterized Islam as a religion of peace. Many people agree with that belief, saying the vast majority of Muslims live peaceful lives.

But others counter that the roots of Islam include violent leaders, teachings and scripture.

A team of experts argued both sides of the motion "Islam Is a Religion of Peace" in a recent Intelligence Squared U.S. debate. Two argued in favor and two against.

Before the Oxford-style debate at New York University's Skirball Center for the Performing Arts, the audience voted 41 percent in favor of the motion and 25 percent against. Thirty-four percent were undecided. After the debate, however, 55 percent disagreed that "Islam Is a Religion of Peace," 36 percent supported the motion and 9 percent were still unsure.

On Oct. 26, a group of experts will debate the motion "Big Government Is Stifling The American Spirit."

Maajid Nawaz is director of the Quilliam Foundation. Formerly, Nawaz served in the U.K. national leadership for the Islamist party Hizb ut-Tahrir and was involved in HT for almost 14 years. He was a founding member of HT in Denmark and Pakistan. He eventually served four years in an Egyptian prison and was adopted by Amnesty International as a "prisoner of conscience." In prison, Maajid gradually began changing his views until he finally renounced the Islamist ideology for traditional Islam and inclusive politics. He now engages in counter-Islamist thought-generating, writing and debating. 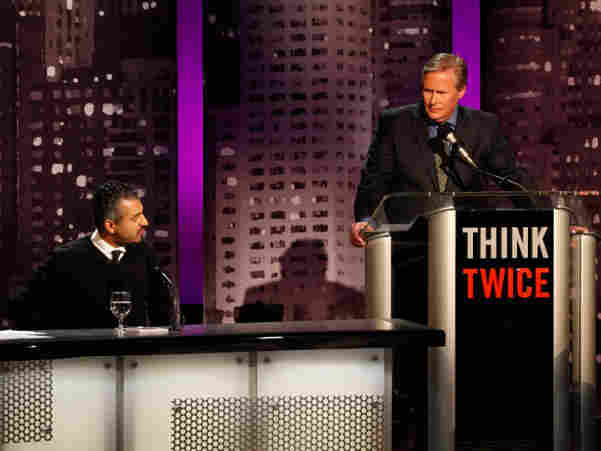 Maajid Nawaz (left) participates in an Intelligence Squared U.S. debate with moderator John Donvan of ABC News. Nawaz argued in favor of the motion "Islam Is a Religion of Peace," along with Zeba Khan. Chris Vultaggio hide caption

Ayaan Hirsi Ali was born in Somalia and raised a devout Muslim. She escaped an arranged marriage by immigrating to the Netherlands in 1992 and served as a member of the Dutch parliament for three years. She has since become an active critic of fundamentalist Islam, an advocate for women's rights and a leader in the campaign to reform Islam. She has also become a target of death threats by Islamic extremists. Hirsi Ali is a resident fellow at the American Enterprise Institute and author of The Caged Virgin (2006), Infidel (2007) and Nomad (2010). She is the founder of the AHA Foundation, whose mission is to defend the rights of women in the West against militant Islam and tribal custom.

Douglas Murray is a best-selling author and award-winning journalist. He is also founder and director of the Centre for Social Cohesion, a nonpartisan think-tank in Westminster, London, that focuses on radicalization and has published work on both Islamist and far-right extremism. Murray is a columnist for Standpoint magazine and writes for many other publications. In 2005, he published the critically acclaimed Neoconservatism: Why We Need It, which Christopher Hitchens praised as "a very cool but devastating analysis." He is a co-author of the NATO strategy report, "Towards a Grand Strategy for an Uncertain World: Renewing Transatlantic Partnership."