Accessibility links
National Review: Pulling The Poor Out Of Poverty Democrats are often quick to criticize the Bush tax cuts as being "for the rich," but Michael Tanner of the National Review argues that they are a step in the direction of job creation, and that allowing the capitalist system to work will do a great deal to end poverty, as long as the Democrats don't get in the way.

National Review: Pulling The Poor Out Of Poverty

National Review: Pulling The Poor Out Of Poverty 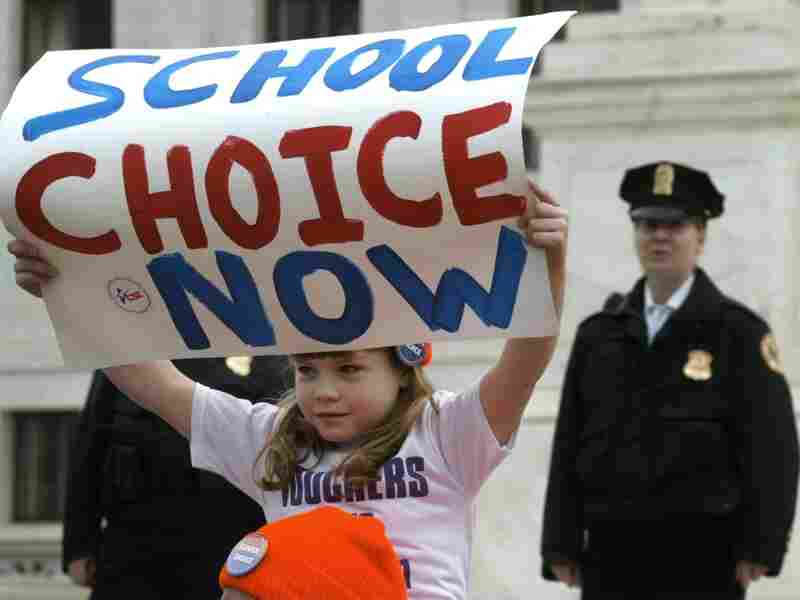 Demonstrators gather in support of school vouchers. Funding for the Washington D.C. school voucher program will expire at the end of 2010, a budget amendment that President Obama has said he would like to revise. Mark Wilson/Getty Images hide caption

Michael Tanner is a senior fellow at the Cato Institute and the author of Leviathan on the Right: How Big-Government Conservatism Brought Down the Republican Revolution.

In his autobiography, former British prime minister Tony Blair recounts the political epiphany that caused him to break with the old-style class-warfare-based Labour Party that he had grown up with. "In a sense they wanted to celebrate the working class," he writes, "not make them middle class."

In many ways, the Obama administration and congressional Democrats appear to have the same attitude about the American poor.

They talk frequently about the poor. They lavish programs upon them. (Last year the Obama administration increased spending on means-tested and other anti-poverty programs by $120 billion, to a total of just under $600 billion.) But they seem curiously indifferent -- if not actually hostile -- to proposals that might actually reduce poverty in America.

For example, few things are as important in helping people escape poverty as education. High school dropouts are more than twice as likely to end up in poverty as those who complete at least a high school education. They are less likely to find jobs, and if they do their wages will be low. In inflation-adjusted terms, wages for high school dropouts have declined by more than 23 percent in the past 40 years. In an increasingly competitive world economy, where success requires advanced skills and technical knowledge, that situation is only going to get worse. As the Department of Education warns in a typical government understatement, "In terms of employment, earnings, and family formation, dropouts from high school face difficulties in making the transition to the adult world."

Yet Obama and the Democrats, in thrall to the teachers' unions, steadfastly resist proposals to give parents more control over their children's education. Washington, D.C., has a public-school system that, despite spending more per child than almost any other system in the nation, still has a dropout rate of more than 50 percent. Yet one of the first actions of the president and congressional Democrats was to kill the Opportunity Scholarship Program, which offered vouchers to permit poor children to opt out of the city's rotten public schools.

And, of course, nothing is more important in fighting poverty than jobs. Yet the Obama administration is overtly hostile to the entrepreneurs and job creators in our economy. The wealthy are demonized rhetorically. Every other day seems to bring a new proposal to raise their taxes. Just look at the barrage of political commercials and presidential speeches that sneeringly denounce the Bush "tax cuts for the rich." But, as former Texas senator Phil Gramm once noted, "No one ever got a job from a poor man."

We can't expect to create more jobs if we punish the type of activity that creates jobs. That means that if we wish to fight poverty, we must end those government policies -- high taxes and regulatory excess -- that inhibit growth and job creation. We must protect capital investment and give people the opportunity to start new businesses.

Along similar lines, one of the great advantages to reforming Social Security with personal accounts is that it would enable low-income Americans to save and accumulate wealth. But don't count on Democrats to lessen their opposition to the idea.

Believers in the free market often seem defensive when the topic is poverty. They shouldn't be. Nothing has done as much to lift people out of poverty as capitalism and free markets. All one has to do is look around the world to realize that those countries that provide the most economic freedom have less poverty than those that are still mired in socialism and government control.

Compassion is more than talking about the plight of the poor or giving them just enough money to make poverty a bit more comfortable. Real compassion is about creating the conditions that will enable the poor to get out of poverty.

That's the point that Tony Blair understood. It's a lesson that Barack Obama and the congressional Democrats should learn.