Accessibility links
'Only More So': Mark Vonnegut's Battle With Bipolar In his new memoir, Just Like Someone Without Mental Illness, Only More So, pediatrician Mark Vonnegut explains how bipolar disorder has shaped but not defined his life — and he describes life with his father, novelist Kurt Vonnegut.

'Only More So': Mark Vonnegut's Battle With Bipolar

'Only More So': Mark Vonnegut's Battle With Bipolar 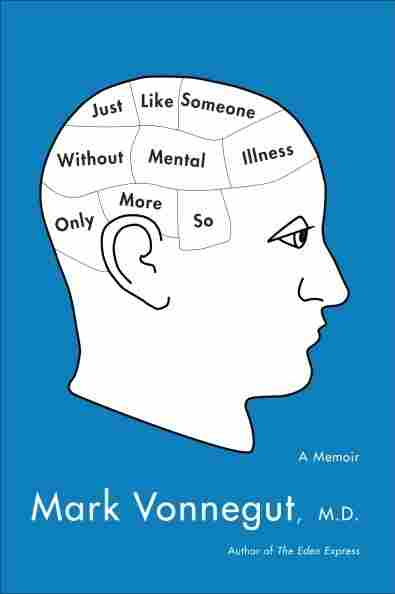 Just Like Someone Without Mental Illness, Only More So: A Memoir
By Mark Vonnegut
Hardcover, 224 pages
Delacorte Press
List price: $24

Recovering from a psychotic break is far from a guarantee. The famed novelist Kurt Vonnegut once wrote, metaphorically, of the challenges of mental illness: "Some people survived going over Niagara Falls in a barrel. Others didn't. The turbulence is really something." But it's his son, Mark Vonnegut, who has written most vividly and personally about surviving bipolar disorder, about returning to a reality that's been snapped. In a phrase, life takes on a new imperative: to be "normal with a vengeance."

Just Like Someone Without Mental Illness, Only More So -- Mark Vonnegut's exactingly titled second memoir -- is an honest, witty and vivid depiction of "normal" life in between interruptions of mental illness. It's about how much one can accomplish, while a history of insanity follows close behind. "Once you've been talked to by voices, it's not possible to go back to a world where talking voices is not possible," he writes. Instead, he couldn't shake the feeling that he was just trying to pass for normal, as if forgetting to tiptoe around the mental eggshells would let the voices return.

More than anything, Mark's bipolar illness gave him the desire to be useful, to make up for the time he spent feeling so utterly useless while hospitalized in his 20s. And useful he became -- after 19 rejections, young Vonnegut earned admission to Harvard Medical School and pursued a long and dedicated Boston-based pediatrics career. To the benefit of his readers, this endows him with a rare prerogative to lament the American medical system, or more accurately, the insurance regulations and cost-efficiency guidelines that make trying to practice medicine today like "long jumping with weights on your ankles." 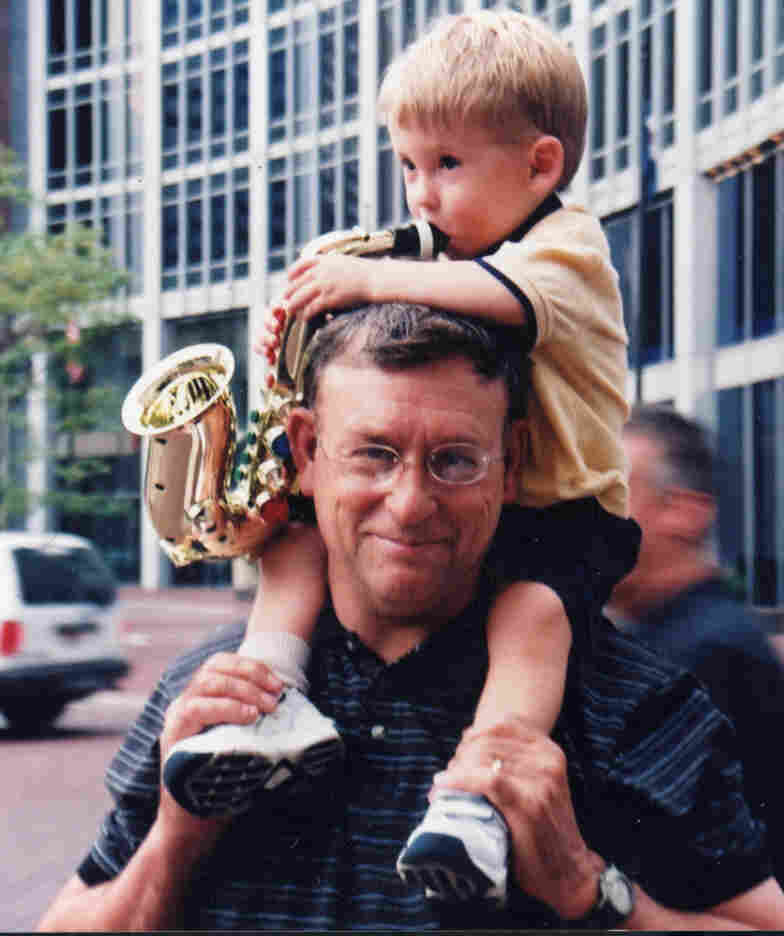 Mark Vonnegut, pictured above with his son Mark Oliver, is a pediatrician and writer living in Massachusetts.  He is also the author of The Eden Express: A Memoir of Insanity. He is the son of novelist Kurt Vonnegut. Barb Vonnegut hide caption 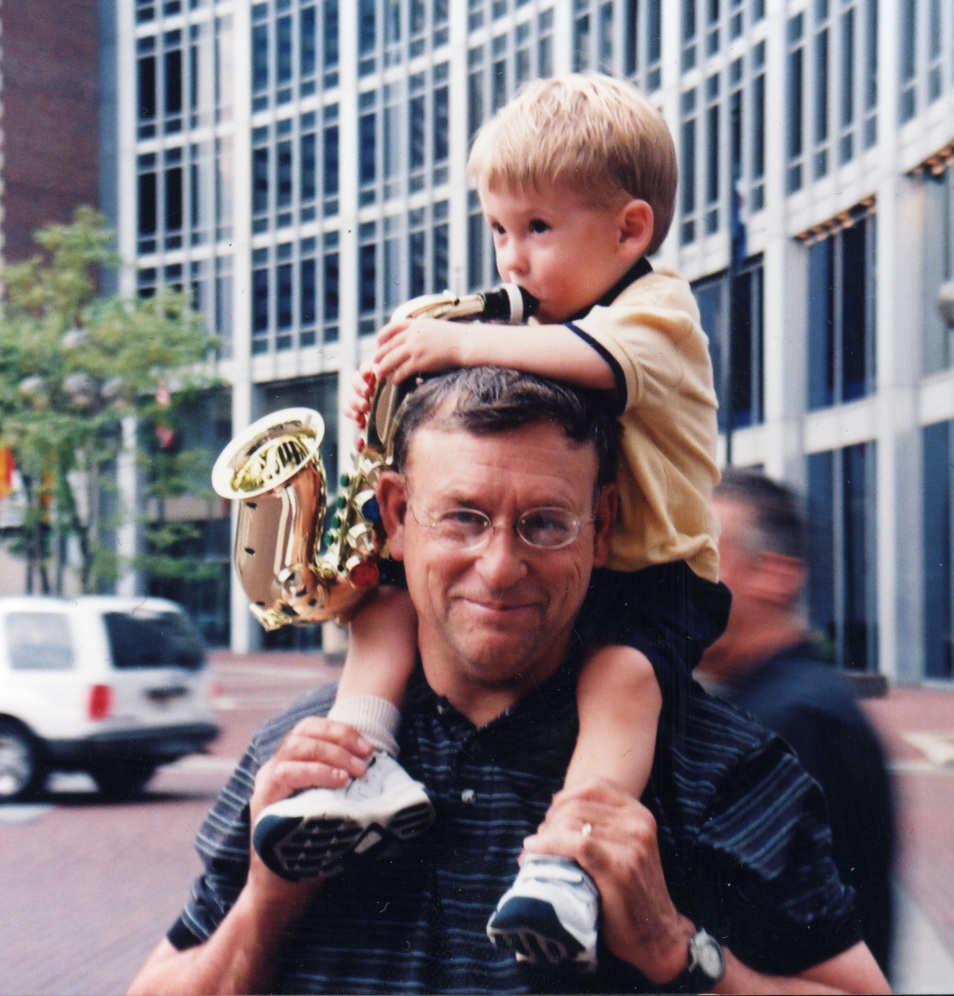 Mark Vonnegut, pictured above with his son Mark Oliver, is a pediatrician and writer living in Massachusetts.  He is also the author of The Eden Express: A Memoir of Insanity. He is the son of novelist Kurt Vonnegut.

Whereas Vonnegut's first memoir, The Eden Express, is a young man's artistic account of spiraling into psychosis amid the social tumult of the 1960s, Just like Someone Without Mental Illness is a vastly more readable, down-to-earth narrative. Wisdom tempers a zeal for political rebellion, and a sense of humor allows brazen self-reflection. He subsumes within these chapters a remarkable amount of his midlife experience, ranging from his around-the clock pediatric residency, alcohol dependence, returning bipolar illness that nearly launched him out a window, remarriage, and a life in the shadow of his father.

The late Kurt Vonnegut is an eccentric background character, and Mark's childhood memories of his not-yet-famous father are worth chasing through the pages for. Far from remembering him as the author of Cat's Cradle, Mark knows Kurt as the man throwing the chessboard across the room upon losing, dancing with his wife and a mop to the tango music in the aisles of Walmart, and adopting four children. It's always amusing to learn that one of the 20th century's most influential writers was once a terrible car salesman who couldn't get hired to teach English at Cape Cod Community College.

Coming from a man who was named Boston Magazine's "No. 1 Pediatrician" just as he was experiencing a fourth psychotic episode, Vonnegut's memoir is ultimately about how bipolar disorder can shape, but not define, a life. Just don't expect it to be normal.

Excerpt: 'Just Like Someone Without Mental Illness, Only More So'

Just Like Someone Without Mental Illness, Only More So: A Memoir
By Mark Vonnegut
Hardcover, 224 pages
Delacorte Press
List price: $24

It's good to have a sixth gear, but watch out for

the seventh one. If you think too well outside the box,

you might find yourself in a little room without much in it.

The arts are not extracurricular.

One hundred thirty-nine years ago, my great-grandfather Bernard Vonnegut, fifteen years old, described as less physically robust than his two older brothers, probably asthmatic, started crying while doing inventory at the family hardware store. When his parents asked what was wrong, he said he didn't know but he thought he wanted to be an artist.

"I don't want to sell nails," he sobbed.

Maybe his parents should have beaten him for being ungrateful, but they wanted their son to be happy and the business was successful enough that they could hire someone else to do inventory. He became an apprentice stonecutter and then went to Europe to study art and architecture. He designed many buildings in Indianapolis that still stand today. He drew beautifully, made sculptures and furniture. He was also happily married and had three children, one of whom was Kurt senior, my grandfather, who was known as "Doc" and who also became an architect. Doc could also draw and paint and make furniture. He made wonderful chessboards, one of which he gave to me when I was nine.

When he was sixty, Doc was pulled over for not stopping at a stop sign. The cop was astonished to notice that his driver's license had expired twenty years earlier.

At the end of his life, which had included financial ruin in the Great Depression, his wife's barbiturate addiction and death by overdose, and then his own lung cancer, Doc said, "It was enough to have been a unicorn." What he meant was that he got to do art. It was magic to him that his hands and mind got to make wonderful things, that he didn't have to be just another goat or horse.

When I worked on the Harvard Medical School admissions committee, artistic achievements were referred to as "extras." The arts are not extra.

If my great-grandfather Bernard Vonnegut hadn't started crying while doing inventory at Vonnegut Hardware and hadn't told his parents that he wanted to be an artist instead of selling nails and if his parents hadn't figured out how to help him make that happen, there are many buildings in and around Indianapolis that wouldn't have gotten built. Kurt senior wouldn't have created paintings or furniture or carvings or stained glass. And Kurt junior, if he existed at all, would have been just another guy with PTSD-no stories, no novels, no paintings. And I, if I existed at all, would have been just another broken young man without a clue how to get up off the floor.

Art is lunging forward without certainty about where you are going or how to get there, being open to and dependent on what luck, the paint, the typo, the dissonance, give you. Without art you're stuck with yourself as you are and life as you think life is.

Craziness also runs in the family. I can trace manic depression back several generations. We have episodes of hearing voices, delusions, hyper-religiosity, and periods of not being able to eat or sleep. These episodes are remarkably similar across generations and between individuals. It's like an apocalyptic disintegration sequence that might be useful if the world really is ending, but if the world is not ending, you just end up in a nuthouse. If we're lucky enough to get better, we have to deal with people who seem unaware of our heroism and who treat us as if we are just mentally ill.

My great-grandfather on my mother's side drank to keep the voices away and ended up the town drunk in the middle of Indiana. My maternal grandmother wrote textbooks on teaching Greek and Latin and had several bouts of illness that resulted in long hospitalizations. When my mother, Jane, was in college the family resources were exhausted after my grandmother spent over two years in a private hospital. With great shame and embarrassment her husband transferred her to a state hospital, where she became well enough to go home a few weeks later. She remained mostly well and never had to be hospitalized again, but she had spent roughly seven years of my mother's childhood institutionalized.

There was no acknowledgment of or conversation about my grandmother's illness either between my mother and her father or my mother and her brother, who would also be in and out of hospitals most of his life. He emerged normal enough to marry three times in his fifties and sixties, hold a job as a librarian, and be the Indiana State senior Ping-Pong champion.

This same maternal grandmother warned my mother not to marry my father because she was convinced there was mental instability in the Vonnegut family. My father's mother, a barbiturate addict who didn't come out of her room let alone the house for weeks at a time, told my father to stay away from my mother because there was mental illness in the Cox family. My father's mother famously (some say it was an accident, but does it really make a difference?) overdosed and killed herself on Mother's Day. Barbiturates had been prescribed to my grandmother as a wonderful new nonaddictive medicine for headaches and insomnia.

If you want to pick out the people who go crazy from time to time in my family, find the ones in the photos who look ten or more years younger than they actually are. Maybe it's because we laugh and cry a lot and have a hard time figuring out what to do next. It keeps the facial muscles toned up.

It's the agitation and the need to do something about the voices that get you into trouble. If you could just lie there and watch it all go by like a movie, there would be no problem. My mother, who was radiant, young, and beautiful even as she lay dying, heard voices and saw visions, but she always managed to make friends with them and was much too charming to hospitalize even at her craziest.

The reason creativity and craziness go together is that if you're just plain crazy without being able to sing or dance or write good poems, no one is going to want to have babies with you. Your genes will fall by the wayside. Who but a brazen crazy person would go one- on-one with blank paper or canvas armed with nothing but ideas?

The psychotic state is a destructive process. A fire can't burn that brightly without melting circuits. Making allowances for individual tolerances and intensity and duration of the breaks, complete functional recovery becomes increasingly unlikely much beyond about eight or nine breaks. Fixed delusions, fears, loss of flexibility, loss of concrete thinking, and low stress tolerance make relationships, jobs, and family next to impossible and then impossible. The biggest risk factor in determining whether or not you have a nineteenth psychotic episode is having had the eighteenth.

Life for the unwell is discontinuous and unpredictable. Things just come out of nowhere. People try but mostly do a lousy job of taking care of you. 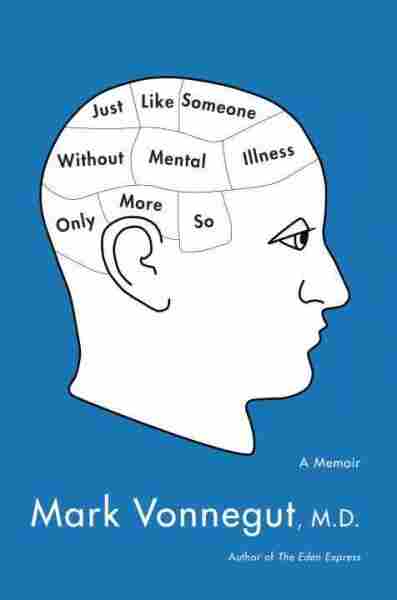 Just Like Someone Without Mental Illness Only More So