Accessibility links
'Monica And David,' Building A Life On Their Terms In a new documentary, filmmaker Ali Codina follows the wedding of her cousin Monica Walters to David Martinez. Bride and groom both have Down syndrome but want to live independently, and the film is as much about their protective mothers' struggle to let them go as it is about the newlyweds. 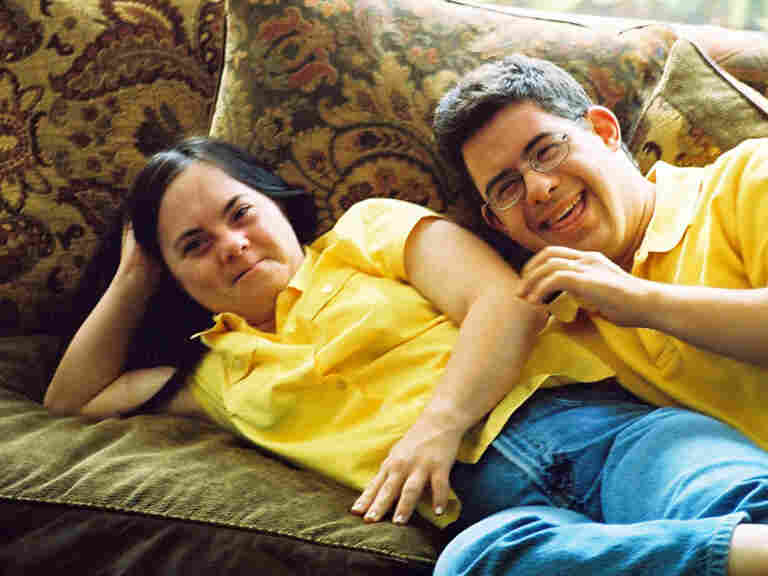 Monica & David follows a young couple with Down syndrome through the early days of their married life -- and turns a keen eye on their parents' struggle to let them live a life of their own. Ali Codina/HBO hide caption

'I Give You This Ring'

In 1983, the life expectancy for people with Down syndrome was 25. Today, it's 60. A documentary airing Oct. 14 on HBO tells the story of two adults with Down syndrome who get married. Monica & David is about their courtship and their married life together. But the documentary is also about what it's like to be a parent of someone with an intellectual disability.

Monica's mother, Marie Elena Walters, is indomitable.  When Monica was a toddler, Walters' husband walked out.  Realizing Monica may never be self-sufficient, Walters set out to get a high-paying job so she could take care of her.

"I firmly believe my life's work is Monica," says Walters in the film.

But Walters also admits that she -- and other parents of children with disabilities -- can be overprotective to a fault.

"Because we want to protect them so much," says Walters, "we are typically the first ones who treat them poorly by subconsciously denying them their rights to have a normal life."

The documentary, by filmmaker Ali Codina, begins the night before Monica and David's wedding. It's obvious they're crazy about each other.  David calls Monica his "Winnie the Pooh."  When David calls her on the phone, Monica rushes to answer it, saying, "My baby! He's worried about me."

Even so, Codina says, some people in Monica and David's circle treated their wedding like it was just a "cute gesture between kids." 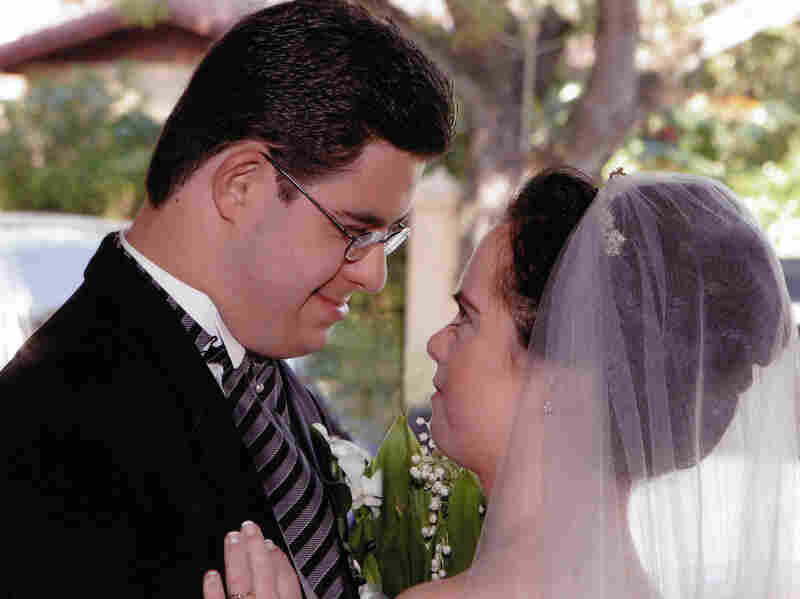 David and Monica are all smiles as they start their new life together. J Miguel/HBO hide caption

"To me the wedding was something very powerful, very serious and very adult," she says.

About 200 people attended the wedding. But the absences were telling. Codina says the parents of some of Monica and David's friends -- friends who also have intellectual disabilities -- did not let their adult children attend because "they thought it would fill their sons and daughters' heads with ideas."

Monica and David are very positive people who are eager to please.  But Codina says that growing up, she often felt there was more going on "beneath the surface." Codina was hoping her film would stir it up.

Monica and David wish to be independent -- and in the film, their mothers' struggle with this becomes palpable. They grapple with just how much independence their adult children can handle.

Monica's Mother's Reaction To The Documentary

Monica's Mother On Being Protective

In many ways, Monica and David seem like any conventional married couple. They do chores around the house together. Monica fusses when her husband takes too long to fold the laundry. But the documentary also hints at their limits. While Codina was filming, the family moved from a house to an apartment -- a change that, as the movie shows, completely unsettles Monica. Bewildered, she stands in her now-empty bedroom, wondering where everything went.

"No pajamas? No armoire? How am I going to sleep?"

Monica's inability to understand what's going on just adds to her mother's own stress about the move.

"It's not connecting. It's not that she doesn't want to realize it; it's just not connecting that we're definitely not here tonight," Walters says in the film.

Monica & David won Best Documentary at last year's Tribeca Film Festival.  It airs on HBO beginning Thursday, Oct. 14, and over the past few weeks, Monica and David have been traveling with Codina to attend special screenings of the film around the country. They're riding in limos and doing interviews. Monica Walters Martinez -- she took David's name when they got married -- says it's been a thrill.

"To see the people, the standing ovation, clapping for us ... the party after, the limo and the red carpet, it's pretty exciting," she says.

Codina believes the experience of making the film and talking about it has helped Monica and David "feel acknowledged and understood -- and that means a lot to them."

The Martinezes are now pursuing acting careers. And when they're on the road, Monica's mother says wistfully, they barely ever call home.