Accessibility links
Beijing Blocks Travelers To Christian Conference At least 11 Chinese Christians planning to attend a global evangelical gathering in South Africa have been barred from leaving the country, and many others have come under pressure. Many fear Beijing is cracking down on Christians who worship outside the official church.

A massive global evangelical gathering known as the Lausanne Congress will begin Oct. 16 in Cape Town, South Africa. But it looks likely to take place without the participation of more than 230 Chinese delegates.

So far, at least 11 people planning to attend have been forbidden to leave China, and many others have come under pressure. Many fear Beijing is moving to exert control over underground Christians. 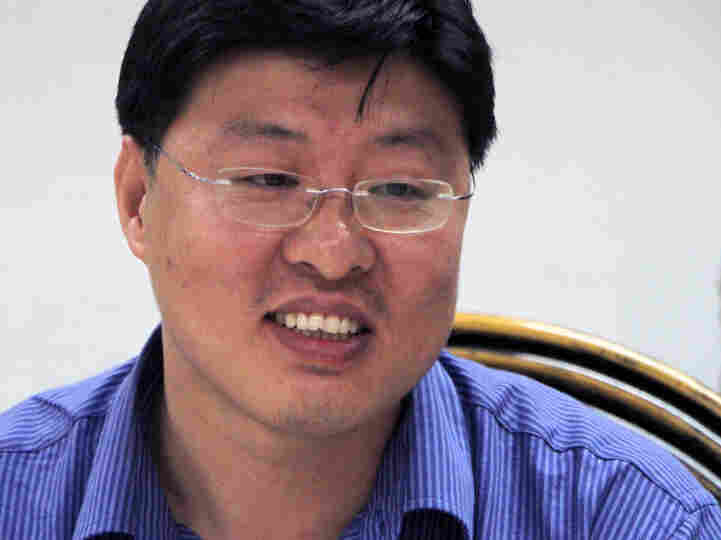 Christianity in China is flourishing, with tens of millions of Christians openly worshiping. Many gather in private assemblies, or house churches, rather than in the official government church, known as the Three-Self Patriotic Movement. The authorities have largely turned a blind eye in the past.

But when a grouping of house churches decided to send some 200 delegates to attend the Lausanne Congress, the government stepped in.

Abraham Liu Guan is a church elder who tried to leave Sunday for the meeting with six others. Authorities warned him not to meet NPR, but in a phone interview he explained what happened at Beijing airport customs. "The border defense people said they'd received a notice from the State Administration for Religious Affairs and the Ministry of Public Security. It said our participation in this meeting threatened state security, and they should not let us pass customs," Guan said.

Some of those who have been turned back have had their passports confiscated. One delegate has been placed in detention. Several others have been prevented from leaving their homes.

For months, across China, officials have been warning almost all the pastors invited not to attend, telling them the meeting was anti-China. For some, there have already been consequences.

I think Lausanne could play a positive role for Chinese Christians. For a short time, there might be pressure or there might be a price to pay. But that will pass quickly.

The Rev. Xing Jingfu from Changsha, in Hunan, said authorities stopped his church from meeting and from preaching. He said they openly said it was because of the Lausanne Congress. If we meet again, they'll arrest us, he said.

China's Foreign Ministry spokesman, Ma Zhaoxu, issued a statement to NPR. It accuses the Lausanne organizers of not issuing an official invitation to China's state-controlled church and of having secret communications with Christians from private assemblies.

"This act has openly challenged China's principle of an independent, autonomous, self-governing church. It is a flagrant interference in China's religious affairs," the statement said.

For their part, the Lausanne organizers say there’s been a misunderstanding, and they did invite the official church as an observer. “We very much regret that our intentions and invitations to our Chinese brothers and sisters have been wrongly perceived. We have a profound set of disappointment and incompleteness in knowing that our friends from China are not able to be with us,” the statement said.

Before the weekend, Lausanne Chairman Doug Birdsall said how Chinese pastors reacted to warnings would be up to them.

"There are times when there are matters of conscience for which people take a stand. Most any right that we have, someone has worked for, or battled for, at some time. The apostle Paul gave advice and encouragement to followers of Christ to be faithful to Christ, and faithful to their nations," Birdsall said.

That China's underground Christians could get together to choose delegates and raise more than $1 million to cover their costs would have been unthinkable a decade ago. But that level of coordination is unsettling to Beijing, especially given the explosive growth in Christianity.

Some predict that this current clampdown will alienate house church members further.

“These measures will cause house churches to feel extreme dissatisfaction with the Chinese authorities,” says Fan Yafeng, a prominent Christian. “Stopping the house church members from attending the conference will have a long-term impact on the relationship between politics and religion in China."

The Rev. Ezra Jin from Zion Church in Beijing says even if he's blocked from going to Cape Town, it won't affect the larger trend. "I think Lausanne could play a positive role for Chinese Christians. For a short time, there might be pressure or there might be a price to pay. But that will pass quickly," Jin says.

"Let our blood and sweat drive China's Christian revival," he prays with a visitor.

Beijing's hard line on this congress comes as the authorities were showing signs of tolerating house churches. It clearly undermines Beijing's claims to allow freedom of religion. It's not yet clear how far Beijing will go.

But some fear this could be the start of a new wave of persecution against China's underground Christians.