Accessibility links
Embattled Skelton Reminds Missouri Voters Of Clout Rep. Ike Skelton, chairman of the powerful Armed Services Committee, is a conservative Democrat representing a solidly GOP district. Voters have sent him back to Washington for decades, largely because he brings home the bacon, in the form of military spending. But now he's in the re-election fight of his life against Republican Vicky Hartzler. 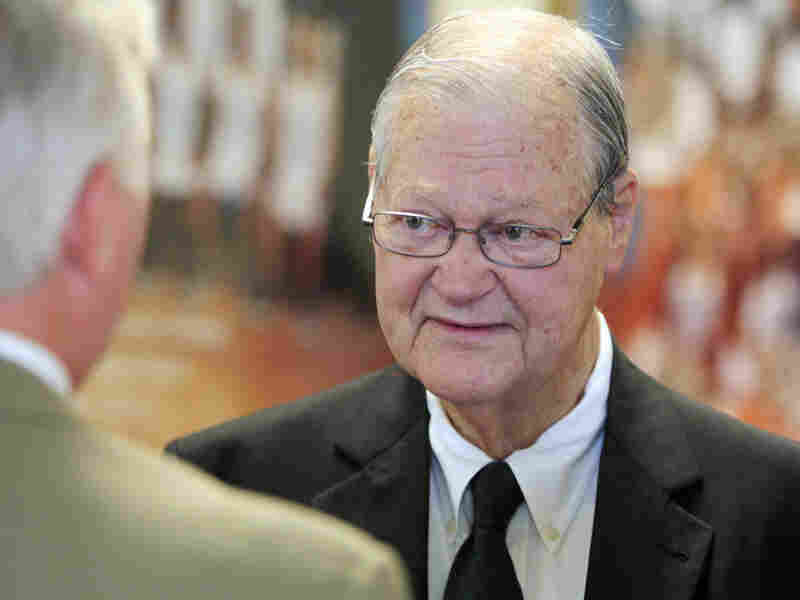 Rep. Ike Skelton (D-MO) talks with an exhibitor at a economic development meeting at State Fair Community College in Sedalia, Mo., on June 4. The chairman of the powerful House Armed Services Committee is in the re-election fight of his life. Orlin Wagner/AP hide caption

In Missouri, one of oldest bulls in Congress could be put out to pasture in November's election.

Rep. Ike Skelton, chairman of the powerful House Armed Services Committee, is in the re-election fight of his life. He's a conservative Democrat representing a southwest Missouri district that's solidly Republican. Yet voters there have sent him back to Washington for more than three decades, largely because he brings home the bacon, in the form of military spending.

You can sense the kind of trouble Skelton may be in by talking with voters like Charlie Jeske. The retiree from Warrensburg, Mo., is a Republican, but he has regularly voted for Skelton in past elections. "He wasn't a very staunch Democrat. He voted Republican most of his life," says Jeske. "Not the last two years. So he’s not going to get my vote this time."

That's how NPR's Ken Rudin rates the race between Ike Skelton and Vicky Hartzler. See his predictions for the balance of power in Congress after the election at NPR's Election Scorecard.

It's almost as if Jeske were reading the talking points of the National Republican Congressional Committee, which has been airing a TV ad in Missouri's 4th District that claims: "After 33 years in Washington, Ike Skelton's gotten lost. Instead of voting for Missouri, Skelton's voting Pelosi's party line -- for Obama's failed stimulus, for Nancy Pelosi's irresponsible budget, for the death tax, even for a new job-killing energy tax."

But ask Skelton about his recent voting record, and he'll point out he's gone against both party and president by voting against the health care overhaul, by opposing the repeal of "don't ask, don't tell" and by pushing back on efforts to trim Pentagon spending. In an interview, the 78-year-old Democrat says he represents mid-America and does so "very, very well."

"I've been able to work through the years with Democrats and Republicans, regardless of who's in the White House," he says. "I've had good luck for my district and I think for the country."

Skelton says that as Armed Services chairman, he has something no newcomer could boast: clout with the Pentagon. "As a matter of fact," he says, "the admirals and the generals do answer the phone when I call."

It was, after all, Skelton who arranged during the Reagan administration to have the entire fleet of B-2 Stealth bombers stationed at Whiteman Air Force Base. To this day, the flat, black delta-shaped bombers blast off from that base into the skies of Missouri's 4th District.

And many of Skelton's constituents remain grateful for what he's done:

"I like Ike," says 85-year-old Navy veteran Ian Ames, who landed in Normandy in World War II. He now lives in Buffalo, Mo., and although he's a Republican, he plans to vote for Skelton in November. "I guess I like him because he stood up for the military people," Ames says. 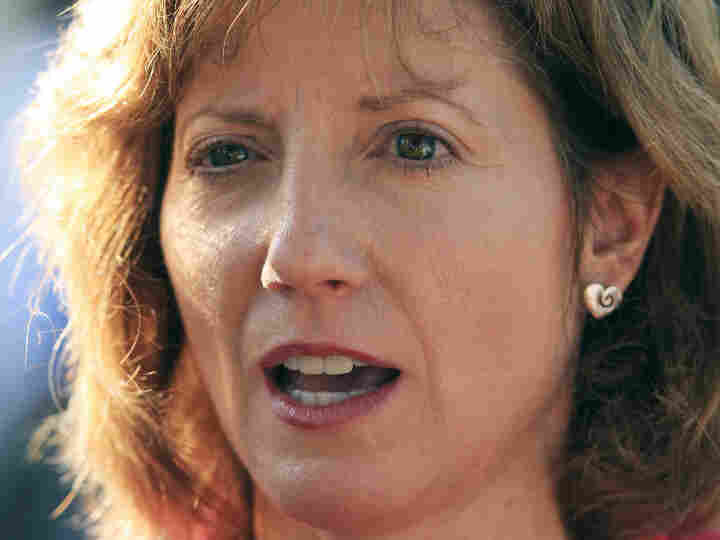 Just down the street, Skelton's challenger is making the rounds. Hartzler was only 16 when Skelton was first elected to Congress; she says she wants his job now because Washington liberals are ruining this country.

Hartzler says the people of the 4th District are fed up with Skelton's support for House Speaker Nancy Pelosi's agenda. "We deserve better," Hartzler says.

Hartzler is perhaps best known in Missouri for having led a successful constitutional amendment drive to ban same-sex marriage. University of Central Missouri political analyst Shari Bax says it was no surprise when Sarah Palin endorsed Hartzler last summer. "She makes no doubt about the fact that she is a conservative candidate who is running on her Christian values," Bax says.

But University of Missouri campaigns expert Elizabeth Miller says Hartzler still has a big problem: She's not nearly as well-known as Skelton. "I think she's run one of the best campaigns Skelton has faced from the opposition," Miller says, "but in the end, he has significantly more money than she has and the Democrats see this as a seat that they should win."

Republicans hope this will be Skelton's last stand. The GOP campaign committee has designated Hartzler one of its "Young Guns," and, in a sign of how high those hopes are, it's spending more on her campaign than in all but five other House races.