Accessibility links
The Root: Why Obama Needs A Chilean Mine Rescue President Obama has seen his popularity drop since he was elected in 2008, even though he has passed much of the legislation his campaign promised. David Swerdlick of The Root argues that it's not a lack of legislation but a lack of leadership that hinders the president.

The Root: Why Obama Needs A Chilean Mine Rescue

The Root: Why Obama Needs A Chilean Mine Rescue 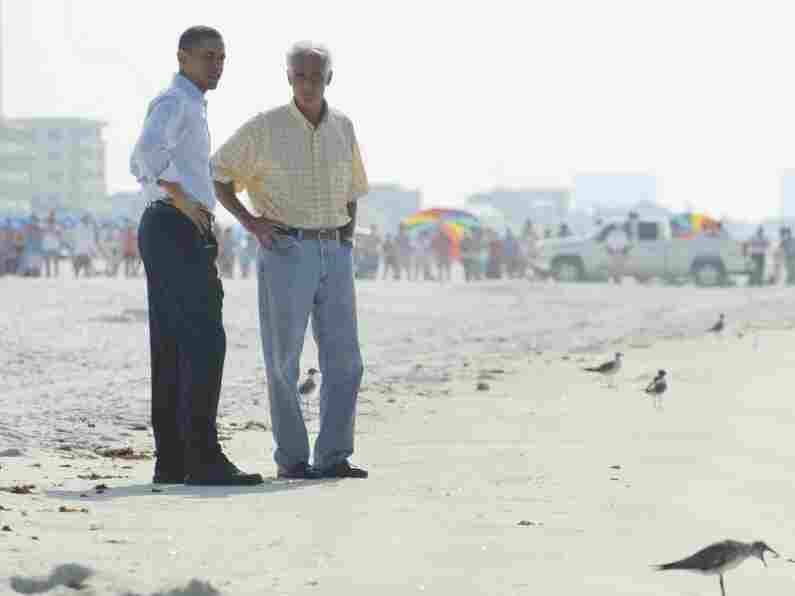 President Obama and Florida Governor Charlie Crist on Pensacola Beach after the BP oil spill. The president has been criticized for his lack of engagement in crises. Some pundits suggest he could learn from Chilean President Sebastian Pinera's handling of the mine collapse. Mandel Ngan/AFP/Getty Images hide caption

David Swerdlick is a regular contributor to The Root.

He was all over Chile's February earthquake. When the news broke, he was on the White House lawn pledging support for the recovery.

He was there for miners killed in a West Virginia coal mine collapse. He recruited former Presidents Bill Clinton and George W. Bush to raise awareness about Haiti's earthquake devastation. He gave the green light to the sniper who took out a pirate holding a ship's captain hostage.

But when people expected to see him on Gulf Coast beaches surveying cleanup efforts, he was slow to react. He waded awkwardly into the "Ground Zero mosque" debate. And this week, when General Motors unveiled the electric Chevrolet Volt to good reviews, thanks in no small part to Obama's auto-industry bailout, the president wasn't there.

Obama didn't seize the moment the way Chile's president Sebastian Pinera did this week in his own country. Pinera showed up in person at "ground zero" in Copiapo, Chile, to celebrate the rescue of 33 miners trapped underground for 70 days -- turning an event that was pretty much an engineering problem into a source of national pride. No doubt, Obama can always be counted on to lend his trademark professionalism if help is needed. But he gets little credit for it -- and it's his own fault.

Every time Obama eschews a feel-good moment, or passes on a chance to put a better face on bad news, he's leaking political capital that he could cash in later when he needs public support -- as he does now with three weeks to go until the 2010 midterm election.

If he doesn't do it, he's not doing his job. It's as much a part of his job as pushing legislation.

A few weeks ago, when I compared Obama's drop in popularity with the decline in public support for outgoing Washington, D.C., Mayor Adrian Fenty, one reader response was, "Being likable is not part of the president's job description." But that isn't the case.

There are enough middling politicians who have the skill set of Senate Majority Leader Harry Reid, who has the ability to move legislation through a fractious U.S. Senate. Plenty of others possess the talent of Sarah Palin to draw a crowd or give a good speech.

But the president has to be both an inspirational leader and a capable steward of government. So far in his presidency, Obama hasn't parlayed his ability to navigate Congress into gaining the public's confidence.

The accomplishments that he has touted with gusto -- like, say, multilateral reduction of nuclear weapons -- don't generate much buzz.

In next Sunday's New York Times Magazine, Peter Baker quotes Obama acknowledging that "we probably spent too much time trying to get the policy right than trying to get the politics right." No kidding. As The Washington Post's Richard Cohen notes, "Being right is nice. Convincing others you are is essential."

Obama told Baker that so far, he thinks his administration "accomplished 70 percent of the things that we talked about during the campaign." Probably. But by now he should know that his problem isn't keeping campaign promises -- with a few notable exceptions, he has. The knock against the president is that he hasn't effectively established his leadership.

Regardless of whether you put any stock in his policy choices, it's hard to say that Obama has failed to take measures that he thinks will help the economy or bolster national security. Last week he quietly vetoed a bill that would have make it easier for banks to foreclose on home loans, but he stopped short of supporting a blanket moratorium on foreclosures -- a judicious move meant to protect homeowners without burdening lenders. But even if you agree with his policy agenda, can you say that Obama's earnest management approach has bolstered Americans' confidence in the overall direction of the country?

So the next time he dispatches federal aid to patch a broken levy or issues stimulus money for a clean-energy project, he ought to show up in person to take some credit.

And maybe bring some coffee and doughnuts.