Accessibility links
A 'Hereafter' Where Matt Damon Sees Dead People Clint Eastwood's latest film is a supernatural drama about a factory worker with the ability to communicate with the dead. Critic David Edelstein says the film is too contrived to tell us anything enlightening about how to live in the shadow of death. 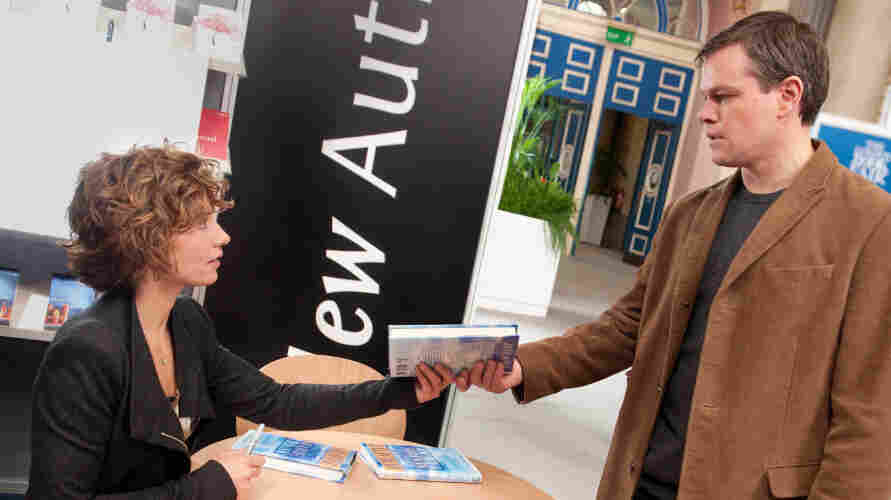 'Can I Ask You A Question?'

'I Think You Experienced Death'

In Clint Eastwood's Hereafter, three people in three countries have close personal encounters with death and subsequently find it impossible to connect with the living; the film follows each character in turn until they finally meet. I won't say what happens when they do, but I thought of Gertrude Stein's unjust verdict on Oakland: There is no there there.

Oh, there is a hereafter in the film, a life beyond this world. You see that in the first 10 minutes. But the movie itself is hung up in a kind of twilight zone, too mawkish and lame to make a decent ghost story, too contrived to tell us anything enlightening about how to live in the shadow of death.

The film ends small but starts really, really big, with a tsunami crashing into a Pacific beach resort and carrying off, among others, Cecile de France's French TV reporter, Marie. The sequence is fast, tight, convincingly real, but when Marie gets conked on the head, she has a vision of the title realm, and it's dismayingly tacky and threadbare -- a whitish void in which streaky human silhouettes stare into the camera.

Yes, it's better than the other extreme -- Peter Jackson's FX-heavy postmortem playhouse in The Lovely Bones. But it suggests all the same that the dead have nothing better to do than stand around waiting for people to poke their heads in. Or for someone like Matt Damon's George to carry messages from one side to the other.

George is Hereafter's second protagonist. He gave up a lucrative career as a medium, talking to the dead -- but his brother, Billy, played by Jay Mohr, continues to bring colleagues to see him.

When he communicates with the dead, George sounds like a typically bogus "cold reader" -- he says things like, "I'm seeing a woman with dark hair: Is that right?" But he's supposed to be the Real McCoy, a man who can grasp someone's hand and see ... that tacky whitish void in which streaky human silhouettes stare into the camera.

The third protagonist is Marcus, a working-class London boy whose twin brother gets run over by a car. Snatched from his junkie mom and placed in foster care, Marcus Googles in anguish for someone to help him talk to his brother, since he's so needy on a daily basis. That's where the movie meanders for a long hour, with Marcus trying to see the dead, George trying not to see them and Marie wandering around visiting researchers asking whether she saw what she thinks she saw. A scientist played by Marthe Keller who claims once to have been an atheist tells her, "The evidence is irrefutable." 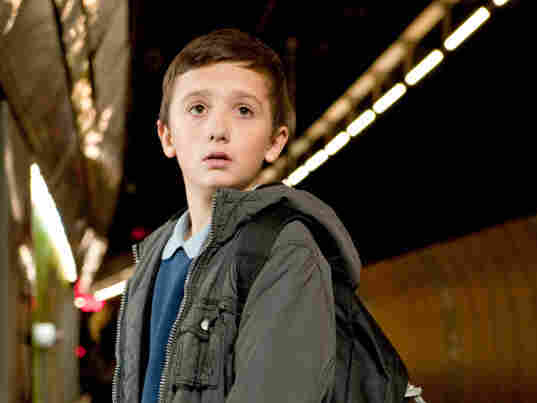 Marcus, played by Frankie and George McLaren, is a schoolboy who encounters death when he loses his twin brother, Jason. Jay Maidment/Warner Bros. Pictures hide caption

The evidence, of course, is thoroughly refutable, but you can be a card-carrying skeptic like me and still enjoy comedies like Ghost Town, horror pictures like Poltergeist or even sappy romantic thrillers like Ghost. Not Hereafter, though: Peter Morgan's script is credulous in the most simplistic, sentimental way imaginable. He says he wrote it after losing a close friend in an accident,  longing to make contact with "the other side." So he creates a world in which there seems to be some kind of conspiracy to keep us all from knowing that the dead have messages for us -- which seem to consist of, "Forget about us and live your life." Good advice.

It's a long decrescendo of a movie, directed in Eastwood's patented laconic style, which sometimes works and sometimes -- as here -- feels dull and impersonal. The solemn guitar-heavy score Eastwood wrote doesn't liven things up.

And neither does Damon, who's glumly self-effacing until the final scene, in which George is suddenly able to see the future as well as the dead: That's plain bewildering. Hereafter closed the New York Film Festival and has been hailed in some quarters as a masterly summing-up of Eastwood's long career, which is kind of alarming. They're raving about him as if he has already given up the ghost.