Accessibility links
Voters Say They Want To Know Who Funds Ads Turn on a TV just about anywhere in the country right now, and you'll see tough political attack ads. In many cases, nonprofits are funding the ads and, therefore, do not have to disclose their donors. But does it matter who funds them? Voters in Pittsburgh say yes.

Turn on a TV just about anywhere in the country right now, and you'll see tough political attack ads. Millions of dollars are being spent on these ads by groups that are organized as nonprofits -- and, therefore, do not have to disclose their donors.

In Pittsburgh, for example, many of the attack ads hitting the airwaves are from these noncandidate, nonparty, supposedly nonpolitical groups. It's perfectly legal for them to raise contributions in any amount, keep their donors' anonymity and run hard-hitting ads -- like one that attacks Pennsylvania Democratic Senate candidate Joe Sestak.

"Call Sestak. Tell him what's good for Pelosi is bad for Pennsylvania," the ad says, before adding, "The U.S. Chamber is responsible for the content of this advertising." 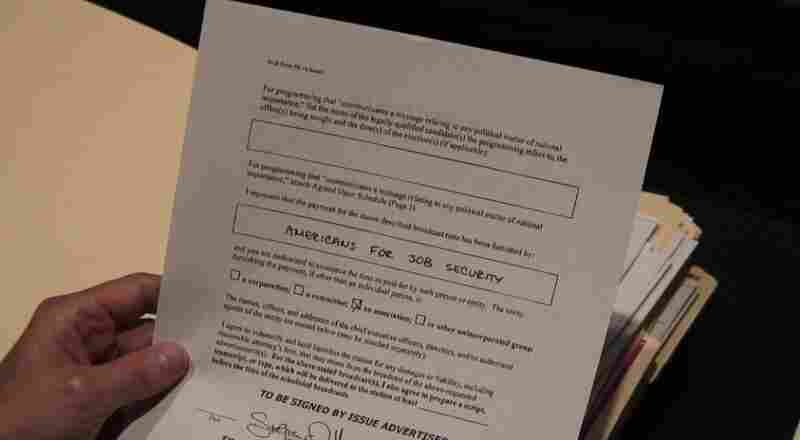 These nonprofit groups do have to disclose something — not to voters, but to TV stations. But many of the disclosure forms they file give less than full disclosure — with parts of the form blank. See examples below.

The U.S. Chamber doesn't have to say who gave it the money for the ad. But does that matter?

NPR asked several groups for interviews. They all refused, or didn't return calls. But those who defend the lack of transparency give this rationale: The information in attack ads should stand on its merits. Viewers do not need to know who funded the ad.

Not surprisingly, Sestak, one candidate under attack, doesn't agree. He's slightly behind in the polls -- and is trying to turn the tables on the U.S. Chamber.

"They really do want somebody who's going to represent them," he says. "So they're trying to make Pennsylvania into an auction, when it's supposed to be about an election."

As for Republican candidate Pat Toomey, the Chamber's ads seem to help him -- as his campaign spokeswoman acknowledged.

Disclosure typically wins plaudits from politicians and the courts -- even the Supreme Court in its Citizens United decision encouraging corporate money in partisan politics (see sidebar). But some conservatives see anonymity in politics as a broad, constitutional right that trumps disclosure. Among them is Sean Parnell, president of the Center for Competitive Politics, which works to end most restrictions on political money.

"There is a time-honored tradition in America of anonymous speech in politics," he says.

But what about the voters? Does it make a difference to them if a political message comes from the U.S. Chamber or a labor union or some "Citizens For" or "Americans For" that they've never heard of?

Tucked among the old brick townhouses of Pittsburgh's North Side is the unassuming storefront of the Monterey Pub. It's a local place -- the comfy, beloved hangout of neighbors who stop by after work for a great burger and Guinness on draught.

Both TVs are on the local news -- at least until the Penguins game starts -- and Andrew Wickesburg nurses his pint. He is not shy about his opinion of attack ads.

What really makes Wickesburg crazy is having no idea who funded the ads.

"Obviously, it's a viewpoint that's held by somebody, but it doesn't have any information that I can really back up, without going and looking for myself," he says.

It's often overlooked in stories on money and politics this campaign season, but the easy path for corporate money to flow into partisan politics was opened, in large part, by the Supreme Court decision in Citizens United.

But the court itself — in that very decision — wrote a strong opinion in favor of rapid and clear disclosure of political spending.

"The First Amendment protects political speech; and disclosure permits citizens and shareholders to react to the speech of corporate entities in a proper way. This transparency enables the electorate to make informed decisions and give proper weight to different speakers and messages."

At the end of the bar, Jana Thompson agrees. She says researching every ad is just impossible.

"If it takes me 20 minutes of Internet searching to find out, because you know, I saw that ad, and there was that thing, and I had to know the name -- yeah, I'm never going to do that. Nobody's going to do that," she says.

In a little booth in the corner, two old friends, Jim Lawrence and Dennis Nolan, pick at their last fries. They're both exasperated by the situation, which Lawrence says is made worse by the ambiguous names the supposedly nonpolitical groups have.

"You know, these things could be financed by anybody. If they want to chop down apple trees it will be called the Green Apple Coalition," Lawrence says.

And Nolan thinks keeping the donors secret actually hoodwinks the viewer into paying attention to the attack.

"When you do find out who's funding them, the motivations are just crystal clear," he says.

Keeping the funding secret allows a corporation to pursue its own interest, in the guise of supporting the people's interest, says Wickesburg. "There are a lot of corporations around here that would benefit from having a candidate that has their interests at heart, not necessarily our interests."

The feeling is strong and unanimous -- these voters want to know exactly who is funding the attack ads. And the fuzzy feel-good name of an organization is not enough.