Accessibility links
Riches Rediscovered:  Handel's 'Rodelinda' Handel's operas are only just emerging from obscurity -- like the exiled king in Rodelinda, who fakes his own death and then makes an daring comeback in a maze of intrigue and blackmail.

From The Itria Valley Festival 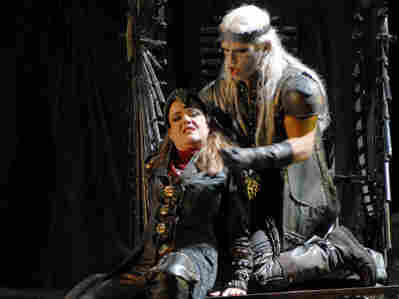 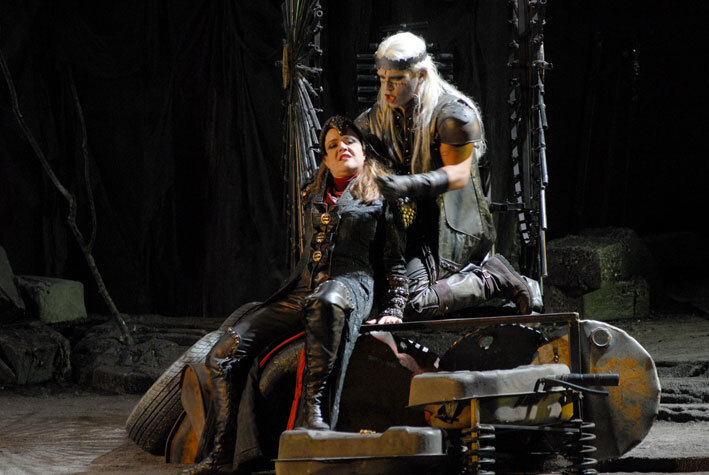 Grimoaldo (Paolo Fanale) threatens to kill Rodelinda's (Sonia Ganassi) son if she doesn't marry him -- even though she's already married.

At the end of Act Two, Bertarido (countertenor Franco Fagioli) reveals himself and is reunited with his wife Rodelinda (mezzo-soprano Sonia Ganassi). When Bertarido is condemned to die, the husband and wife assume they're meeting for the last time and sing the tender duet "Io t'abbraccio" -- "I embrace you."

In Act Three, after making his escape, Bertarido compares himself to an enraged animal freed from a trap in the spectacular aria "Se fiera belva" -- "If a wild beast." In this performance by Franco Fagioli, you'll hear something that was typical in the 1700s, but is rarely heard today: a spontaneous virtuoso encore of the aria's final section, complete with added vocal embellishments.

In today's world, with pop music from the past century or so available to us at the click of a mouse, it's hard to imagine the hit tunes of a globally popular musical act simply disappearing from the public eye, as though they had never existed.

Look at The Beatles, for example.  Let's say that after they officially broke up, in 1970, all but a few of their songs and albums were basically forgotten -- that Revolver, Sgt. Pepper, The White Album and Abbey Road never even made it to CD, much less onto your MP3 player.  And that all that music remains obscure, at best, until someone dusts off a few worn LPs early in the 22nd century, and it all regains its hit status.  It's an impossible scenario, right?  It could never have happened.  But it did happen -- not to The Beatles, of course, but to one of the greatest and most popular composers of all time.

George Frideric Handel was a truly cosmopolitan musician, whose work became an international sensation in the 1700s.  Born in Germany, he had his greatest success in London, writing Italian opera.  During the 1720s and '30s, the incredible string of operatic hits he wrote for the city's theaters made him one of Europe's most successful composers.  And when London's audiences tired of Italian opera, he maintained his popularity with English oratorios and orchestral music.  But after he died, in 1759, everything started to change.

For nearly 150 years after Handel's death, all but a small number of his works fell into obscurity.  Some of his orchestral pieces stayed popular in the concert halls, along with a few oratorios, such as "Messiah."  But most of his music, including virtually all of his 40-plus operas, were virtually ignored until a long-overdue Handel revival early in the 20th century.

Fortunately for today's audiences, Handel's dry spell is now long over.  Still, he composed so much great music that his works are still being mined for neglected gems -- and his operas may be the richest territory of all.  A relative few of them, including Ariodante, Rinaldo and Julius Caesar, now see the stage with some regularity.  But there are many more that still qualify as hits waiting to happen.  One is featured here this week.  It's called Rodelinda -- a powerful drama filled with so many great numbers that it could almost fill a classical Top 40 chart by itself.

On World of Opera, host Lisa Simeone presents Rodelinda, Handel's one-opera hit parade, from the Valle d'Itria Festival in Martina Franca, near the Adriatic coast in the south of Italy.  The opera features a number of powerful and compelling characters, and the production follows suit with several standout performances.  Top billing goes to mezzo-soprano Sonia Ganassi as the steadfast wife Rodelinda, and to the brilliant countertenor Franco Fagioli as her troubled husband, Bertarido.

The Story Of 'Rodelinda' 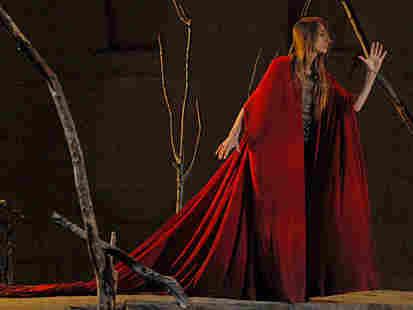 Handel composed Rodelinda for the Royal Academy of Music -- a venture the composer helped to launch in London, with his own operas as one of its main drawing cards. Rodelinda was first performed at the King's Theatre early in 1725. The opera's plot is a bit complicated, but it's also fairly straightforward -- at least for an Italian opera from the 1720s.

The action takes place in the 7th century. The title character, Rodelinda, is married to Bertarido, the rightful king of Milan, and the two have a young son, Flavio. But Bertarido's throne has been usurped by Grimoaldo, a neighboring Duke, with help from his treacherous ally, Garibaldo. Bertarido was forced into exile, leaving Rodelinda behind. But, after faking his own death, he's now back in Milan, in disguise. Grimoaldo doesn't know this, and though he's engaged to Bertarido's sister Eduige, he has now decided that with Bertarido out of the picture, he wants Rodelinda instead.

ACT ONE begins in a cypress grove, among monuments and tombs. One of the monuments is dedicated to the supposedly dead Bertarido, who now appears in the grove to look it over. He's talking to his friend Unulfo when Rodelinda appears with her son Flavio, and the two men hide while she kneels at the monument to her husband.

Before long, Grimoaldo's unscrupulous henchman Garibaldo turns up. He grabs Flavio and offers Rodelinda a deal: Either she marries Grimoaldo, or young Flavio will be killed. Not seeing much choice, she agrees. She also declares that after the marriage, the first thing she'll demand from her new husband is Garibaldo's head. When everyone else has gone, Bertarido and Unulfo come out from hiding. Not fully understanding the situation, Bertarido thinks Rodelinda has betrayed him, and sings a fiery aria as the act ends.

In ACT TWO, Rodelinda's predicament also causes trouble for another young woman. Eduige, Bertarido's sister, had been in love with Grimoaldo, and the two were engaged. But now that Grimoaldo has forced himself on Rodelinda, Eduige has an unwanted admirer: Grimoaldo's violent crony, Garibaldo.

Grimoaldo goes to Rodelinda, demanding an official announcement of her agreement to marry him. But Rodelinda has an unexpected demand of her own. Rather than asking for Garibaldo's head, she has a shocking request that's actually a sort of test for Grimoaldo.

Rodelinda says that before they can be married, he must kill her own son Flavio -- declaring that she can't marry Grimoaldo while the rightful heir to the throne is still alive. Actually, she doesn't believe Grimoaldo is ruthless enough to kill the boy, and gambles that her outrageous demand might put the marriage on hold. It turns out she's right: Grimoaldo can't do it. But Garibaldo sees that as a sign of weakness. He decides to make a try for the throne himself, but he reveals his plan to the wrong guy: Unulfo.

As it happens, while Unulfo is a trusted member of Grimoaldo's inner circle, he's secretly loyal to Bertarido, and tells him exactly what's going on. Bertarido, who is still in disguise, now decides to reveal himself, and Unulfo takes him to Rodelinda. Their reunion is spoiled by the arrival of Grimoaldo. He's never met Bertarido, and thinks he's caught Rodelinda with an illicit lover. When Bertarido declares his identity, Rodelinda denies it, trying to protect him. But Grimoaldo doesn't really care who this newcomer is, and condemns him to death. He leaves the two alone together, saying this meeting will be their last, and the act ends with their tender duet.

In ACT THREE, the sadistic Garibaldo wants Bertarido's execution carried out immediately. But Grimoaldo is having second thoughts and the imprisoned Bertarido still has allies of his own: Unulfo and Eduige. Eduige has a key to the prison and gives it to Unulfo, who rushes off to release Bertarido. Then she drops a sword into Bertarido's cell, from above. But when Bertarido hears Unulfo approaching, he assumes it's the executioner. So when the cell door opens, he attacks with the sword -- wounding Unulfo, but not killing him. The two quickly escape through a secret passage, leaving a bloody cloak behind.

Before long, Eduige and Rodelinda arrive at the prison, expecting to find Unulfo leading Bertarido to freedom. Instead, they find the blood-soaked cloak, and assume that Bertarido has been killed. Outside, in the palace garden, Bertarido tends to Unulfo's wound and vows to get even with Grimoaldo, who soon appears. Bertarido and Unulfo hide. Alone, Grimoaldo regrets his crimes and is stricken with guilt. Longing for a simpler life, he settles down to sleep.

Garibaldo has eavesdropped on his boss' whole, tormented monologue. He's had enough of Grimoaldo's wavering and decides to murder him in his sleep. But as he approaches, Bertarido intervenes, driving Garibaldo off and killing him. By the time he returns, Rodelinda and Eduige are also on the scene, and they're relieved to see Bertarido alive.

Grimoaldo, realizing that Bertarido has saved his life, has a final change of heart. He renounces the throne of Milan, yielding the kingdom to Bertarido, and all is well as the opera ends.