Accessibility links
What's At Stake In 2010 Governors' Races Voters in 37 states will cast ballots for governor in November. The outcomes will affect not just governance in those states -- the newly elected governors could tilt the playing field in the 2012 presidential election, and many could shape the future of Congress through their role in redistricting. 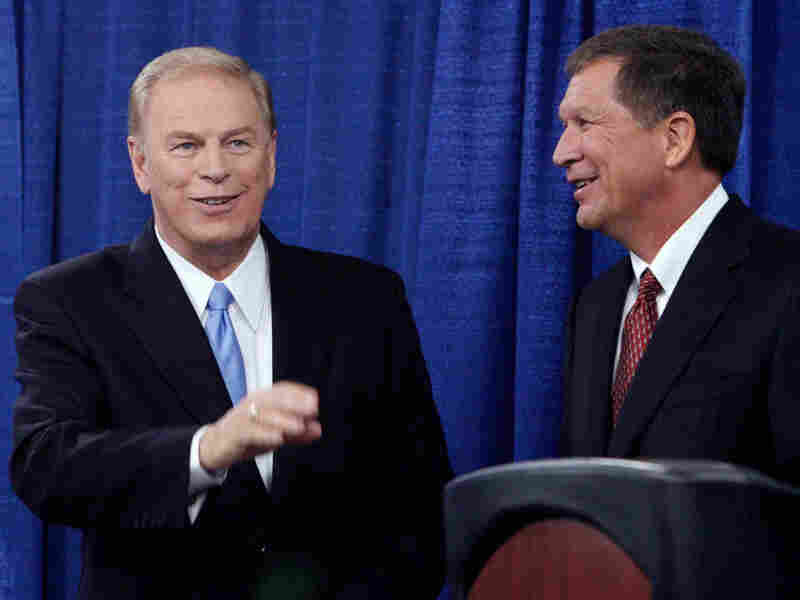 Ohio Gov. Ted Strickland (left) and Republican challenger John Kasich at an Oct. 7 debate in Toledo. Nathan Daschle, the executive director of the Democratic Governors Association, points to the help Strickland's efforts gave to the Obama campaign in 2008 as an example of how governors can influence the presidential election. Andy Morrison/AP hide caption

While the political world is fixated on the battle for control of Congress, 37 states are also electing governors this year, and the Republican tide is running high in these races as well as those for House and Senate.

"I feel pretty certain that we'll get 30 or more governors. Right now it's 26 Democrats, 24 Republicans. If the election were today, we'd probably get 33, 34 Republicans, but I suspect we'll get at least 30," Barbour said last month at the Hoover Institution at Stanford University.

Historically, the party in the White House loses about five governorships in a midterm. But Nick Ayers, the executive director of the Republican Governors Association, says the number of potential Republican gubernatorial pickups isn't as significant as their location.

See who NPR's Ken Rudin and other political watchers predict will win the governors' races at the Election Scorecard.

"The important thing is, look where we're on offense. It's places like the entire upper Midwest. I mean, you can start in Pennsylvania and go west -- Pennsylvania, Iowa, Illinois, Ohio, Michigan, Wisconsin," Ayers says. "Those are all places that Democrats currently have the governors' offices. Those are all places where we're either tied or ahead in the polls. The significance of being able to sweep an entire region of the country is an important one, but the impact it could have on 2012 is incredible."

Democrats are worried about losing governorships in the battleground around the Great Lakes, but they are hopeful about taking back the governors' mansions in two other prize states -- Florida and California.

A gubernatorial win in a midterm does not predict a state's vote in the next presidential race. But even some Democrats agree that such losses this year would make the 2012 landscape look more forbidding for President Obama's re-election.

Nathan Daschle, the executive director of the Democratic Governors Association, knows why. He says governors matter in a presidential election because while there's no guarantee they can deliver their state, they do represent their party to state voters and they control a lot of political machinery.

"They reinforce the Democratic brand to voters on a very, very local level, and they build infrastructure. Ohio is just a great example because the Ohio Democratic Party was virtually nonexistent before Ted Strickland took over. Then he took over, invested his first two years to building that party, and it paid off," Daschle says.

Strickland was elected governor of Ohio in 2006 -- two years after John Kerry lost Ohio to George W. Bush. Partly because of the political organization Strickland built, Obama was able to win Ohio and the presidency in 2008. But now Strickland is fighting to keep his job against a strong challenge from former Republican Rep. John Kasich.

A Hand In Redistricting

There are other reasons the stakes are so high for the governors' races this year, says Delaware Gov. Jack Markell, chair of the Democratic Governors Association.

"Governors' races are important every cycle. But this cycle, they are arguably more important to the future of Congress than the congressional races themselves. Now you're not gonna hear that said very often, but it's true," Markell says. "There's a potential that a lot of the seats being fought over today won't exist in anything resembling their current form after 2012."

That's because governors in most states have a lot of control over the maps that determine the boundaries of congressional districts -- and, as Barbour explains, all those boundaries are up for grabs next year.

"The governors who are elected this year will preside over redistricting. The census this year means that we must reapportion, redistrict both the U.S. House and both houses of the state legislature in the next two years," Barbour says. "Thirty-nine governors have a role in reapportionment. Many of them can veto the redistricting plan. That matters."

Governors can make sure -- by wielding their veto pens -- that when the boundaries of congressional districts in their states are redrawn they're drawn in a way that makes it easier for their own party's candidates to win those seats. It's a longtime practice known as gerrymandering, and both parties do it when they can.

So governors can help tilt the playing field in presidential elections. They can literally help design the playing field for congressional elections and they also shape national debates about policy. Remember the uproar over the immigration law that Arizona's Republican Gov. Jan Brewer signed into law last spring?

Next year expect more heated policy debates on immigration and on issues like health care and spending -- all spearheaded by this year's crop of newly elected governors.