Accessibility links
In Just One Year, A Mexican City Turns Violent Last year, Reynosa — a dusty, sprawling city of half a million people across the border from McAllen, Texas — was a relatively peaceful part of the country. Now it's one of the most dangerous places in Mexico. 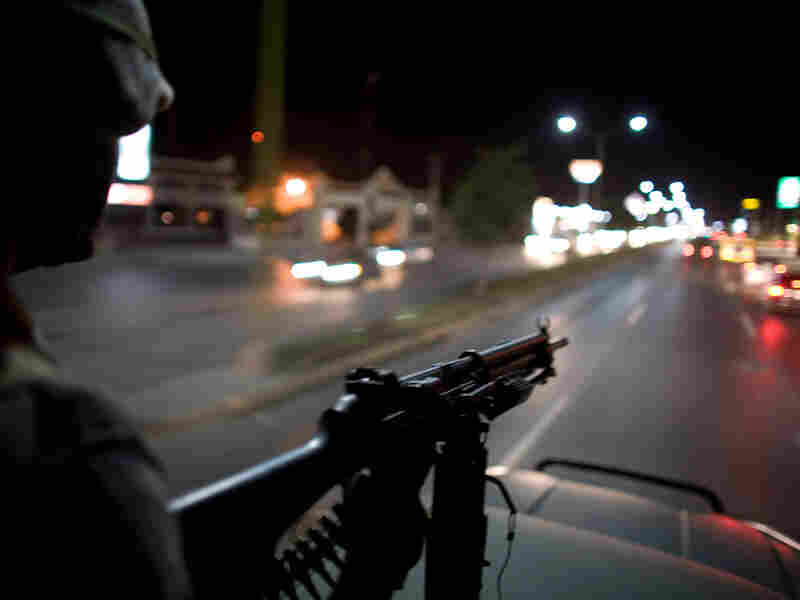 Mexican soldiers patrol the streets of Reynosa, on Mexico's northeastern border with the United States, in March 2009. AP hide caption 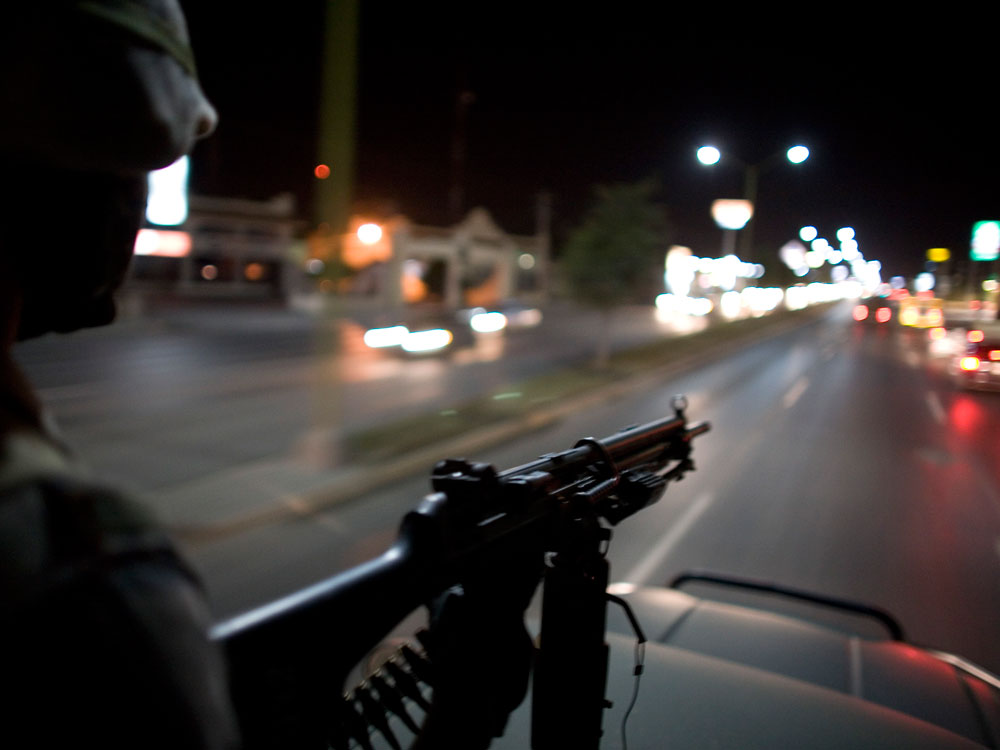 Mexican soldiers patrol the streets of Reynosa, on Mexico's northeastern border with the United States, in March 2009.

As Mexican President Felipe Calderon pushes forward with his war against the drug cartels, various parts of the country have been affected in different ways. Recently, the state of Tamaulipas, which borders the southern tip of Texas, has seen a significant surge in violence.

Just a year ago, Reynosa -- a dusty, sprawling city of half a million people across the border from McAllen, Texas -- was a relatively peaceful part of the country. Now it’s one of the most dangerous places in Mexico.

This is a maquila town. There are roughly 140 factories -- maquiladoras -- that float in a free-trade limbo between the U.S. and Mexico. During the day in downtown Reynosa, shops bustle with activity. Young men sell pirated DVDs on the sidewalk. Music blares from a CD store. Shoeshine men polish shoes.

But this is a city that, this year, has become seized with fear.

As night falls, so do the metal shutters on the businesses -- and the streets become eerily empty.

"It's not officially declared a war, but we are in a war zone," says Eliacib Leija, 40, who grew up in Reynosa. Now he's the coordinator for President Calderon's PAN party in the state of Tamaulipas. "Most of the people stay home after 6, 8 at night. Just don't go out; you take your precautions. Because once in a while you hear a bunch of shootings and things like that."

Battle Between The Gulf Cartel And The Zetas

The problem in Reynosa is the same problem that’s plaguing the rest of Tamaulipas -- a fight between the Gulf cartel and its former hit squad, the Zetas.

At times this fighting has involved shootouts between more than a dozen heavily armed combatants.

While residents may hear the confrontations in the streets, the local news media, under pressure from the cartels, have stopped reporting on the drug violence almost entirely.

The security situation has gotten so bad, Leija says, that many mayors and other high-ranking public officials in this part of Mexico now live in the United States. "And not only city and official people," he says. "Inversionistas. People who have businesses from Tampico, Matamoros, Reynosa, Laredo, are going to the U.S. because of this insecurity."

It's not officially declared a war, but we are in a war zone.

Many people in Reynosa behave as if they're living under a dictatorship. But here the feared, omniscient authority is not the state; it's the cartels.

Shopkeepers, politicians, journalists decline to be interviewed, and some say explicitly that they can’t be caught by "los malos," the bad ones, speaking to a foreign reporter.

Along the south bank of the Rio Grande, young lookouts for the Zetas watch the river to make sure that only cartel-approved smugglers move migrants or other contraband into the United States. Migrants who have come to the border to try to cross illegally are terrified -- not of the American authorities but of the Mexican criminals.

This is the state where 72 migrants were slaughtered in August, allegedly by the Zetas.

At a shelter for people who have just been deported from the U.S., a 23-year-old Honduran named Edwin Ramos Ponce says migrants here are regularly beaten, robbed and kidnapped. "They know where we come from. They know and they treat us wrong here," he says.

Ramos says he sneaked into the U.S. illegally 10 years ago with his uncle at the age of 13. Two months ago he got deported for, in his words, making some bad choices. Now he's broke and stuck in Reynosa.

"I mean, it's like dangerous here," he says. "Nobody's safe here in Mexico. Not even the [Mexican] people's safe here."

Rodriguez says the violence is now making the poverty even worse, as Texans no longer want to come across to shop or have dinner.

The differences between McAllen, Texas, and Reynosa, Mexico, are sharp.

On the Mexican side, there are heavily armed soldiers on the border, torn-up roadways and a collective fear. On the Texas side, people leave their keys in the ignition of their pickup trucks at the gas pump.

But economically, these two worlds are closely intertwined. They even have the same economic development agency. Keith Patridge, the head of that agency -- the McAllen Economic Development Corp. -- says the violence in Reynosa is definitely affecting the area.

New potential investors are being scared away from the Mexican side, but it also has caused a burst of Mexican investment into McAllen. "From a short term, that's good for the local economy because we are selling houses, new business, creating jobs," Patridge says.

But he says McAllen derives its economic strength from its relationship with the low-cost manufacturing plants in Reynosa. Patridge says the two cities are dependent on each others' success.

And right now, with drug violence flaring across the country, that's not what they've got.