Accessibility links
Fan Alert: The Wild McRib Has Been Sighted Some devotees of this hard-to-find sandwich drive hours to get their fix of chopped and formed pork patty. Now, McDonald's is releasing the McRib nationwide for the first time since 1994. 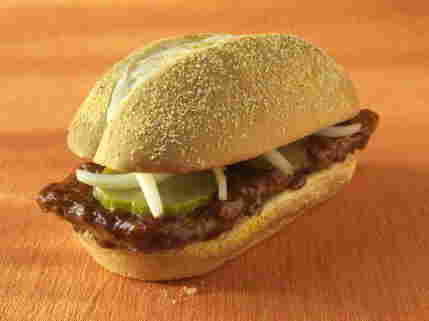 Sixteen years ago, a still-youthful Bill Clinton was in his first term, the Republican Revolution had yet to fire its first shot, and Israel had just signed a peace treaty with Jordan.

But one epochal event overshadowed it all: the return of the McRib.

That year, 1994, was the last time McDonald's rolled out the barbecued pork patty nationwide. Ever since, McRib aficionados have had to hunt the elusive sandwich from town to town, tracking its limited releases through websites and word of mouth. But starting Nov. 2, the McRib will be available everywhere for six weeks.

Ten Hours For A Sandwich?

The news has taken the blogosphere, Facebook and Twitter by storm. Ryan Dixon, a graphic novelist and blogger who lives in Burbank, Calif., tells NPR's Guy Raz that he once drove a whopping 10 hours for a McRib.

"One of the major reasons for me why the McRib is the greatest fast food item of all time is it's a sort of our only example of a crypto food," Dixon says. "It's a sort of culinary cousin of a Sasquatch, a Loch Ness monster, a chupacabra."  You hear about a sighting, he says, but by the time you get there, the sandwich has disappeared.

The McRib hasn't been on McDonald's permanent menu since the 1980s. It was never a huge hit with diners, but among hardcore followers, no other fast food inspires this kind of devotion.

Alan Klein trained as a meteorologist, but the Minnesota man's true love is the McRib. He tested out his storm-tracking abilities by creating a website that lets McRib fans track appearances of the sandwich.

Klein says he first tasted the McRib as a kid, growing up on a hog farm in rural South Dakota. "My dad and I took some hogs into town for sale, and after that, there in Winner, S.D., there was the McRib. It was almost as if we were supporting ourselves by buying a pork product."

For Dixon, the appeal of the McRib goes beyond its taste. "It's a sort of holy relic of the time, meaning the late '70s, early '80s, when we celebrated the fakeness of food," he says.

He says nowadays people are devotees of the "Michael Pollan cabal," referring to the author of Omnivore's Dilemma and other critiques on the modern agribusiness.

Back then, he says, "it was like the more fake a food could be, the more popular it was."

The McRib is not a real rib. "The bones in it look like French toast pieces," Dixon says, "and it's fully constructed to represent something that none of the parts that go into it have any relation to in reality."

But that just makes the McRib even more delicious. The sandwich returns Nov. 2, Election Day. Klein and Dixon say it's a toss-up as to whether they will line up first at the polling place or at McDonald's.

Find a sandwich with the McRib Locator