Accessibility links
Practically Strangers "'Some people swore that the house was haunted.' Now isn't that just about the worst opening line you ever heard in your life?" Richard thumbed through the frayed paperback, nearly as thick as it was long. He flipped it over and pointed to the round orange sticker over the barcode. "See?" he said. "Bargain bin." 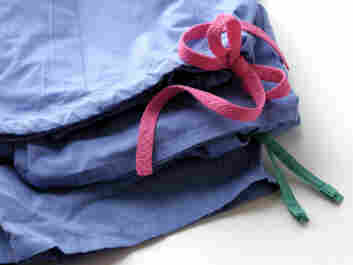 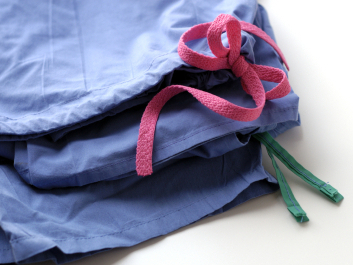 "'Some people swore that the house was haunted.' Now isn't that just about the worst opening line you ever heard in your life?" Richard thumbed through the frayed paperback, nearly as thick as it was long. He flipped it over and pointed to the round orange sticker over the barcode. "See?" he said. "Bargain bin."

Molly grabbed the book from him and set it back down on the nightstand. "Leave that alone," she scolded. "In fact, leave all of it alone. Let's just pick something out and go."

"It was obviously the last thing the woman read before she kicked it, and it's a paperback novel from a bargain bin. I'm just asking you to acknowledge the tragedy in that."

Molly slid the closet door aside on its rusty track and observed its contents. She used to think, when handing Mrs. Nora her rent check at the end of every month, that the landlady must have a limitless supply of pastel-colored scrubs. She had wondered if she had some kind of second job that required her to wear them, although she seemed to always be home regardless of what time of day Molly brought the check by. Now here she stood in front of the entire collection of them, color-coordinated, and she still didn't know the answer. She didn't even know anyone who would know the answer. It was the funeral director who asked her to pick out the dress. He said Mrs. Nora had made arrangements for herself, but hadn't included that detail. Molly had given her contact information to the coroner, and now here she was.

Hands wrapped around Molly's shoulders, and she flinched. "Stop it." She punched Richard's arm. "It's creepy."

Mrs. Nora is the one who's creepy. Look at all these scrubs. He started to rummage through the pastel spectrum on hangers, then suddenly gasped. "You don't think she died in a pair of these scrubs, do you? While reading the bargain bin book? I don't think I could handle that."

"It's not funny," Molly said. "It's sad. She died without anyone." She wanted to tell him how it felt to find her like that, sprawled out on the hardwood floor with her arm out in front of her, reaching for the door. Reaching for something. How she was limp and stiff all at the same time, and the smell, and the horrible realness of the whole thing.

Instead, she reached for a blue dress with a black, beaded neckline that caught her eye from behind the winter coats. "This one," she said. "Now let's go."

Once outside, Molly locked Mrs. Nora's house with the key that she had been instructed to leave  in the mailbox, but she couldn't shake the feeling that some kind of course had been set in motion. A spinning after something, or away from it. She looked over at Richard, already bounding down the porch steps into the bright glare of the afternoon. Whatever thing or realization that was clinging to her hadn't stuck to him, and nothing was ever the same again after that.