Accessibility links
Banks Fumble Amid Flood Of Foreclosures When the housing bubble burst, banks hired thousands of inexperienced people to deal with the crisis -- and a lot of mistakes were made. Now millions of homeowners wait as some call on the government to issue a moratorium on foreclosures. 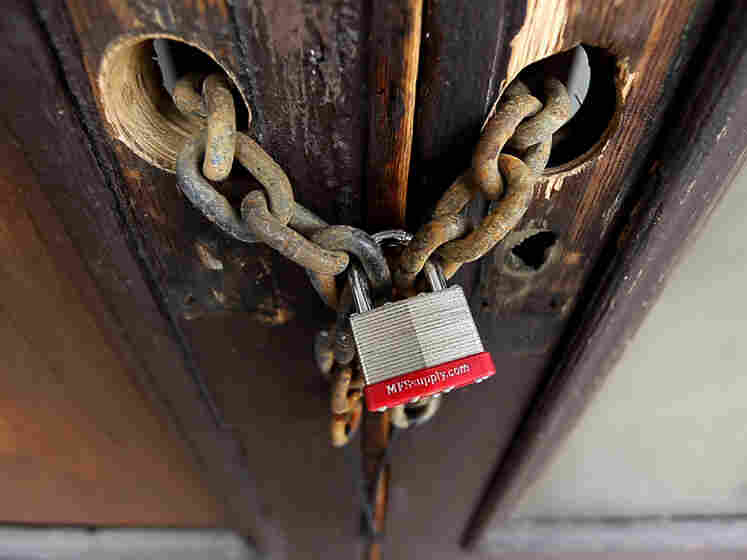 A chain and padlock take the place of doorknobs on a foreclosed home in the Bronx, N.Y. Julie Jacobson/AP hide caption

Since the housing bust began two years ago, the foreclosure industry has become a business of its own. Banks contract law firms that contract document-processing companies that then hire inexperienced temps (often referred to as "Burger King kids") to stamp all of the paperwork.

Needless to say, a lot of mistakes were made along the way. As a result, Bank of America, JPMorgan Chase and Ally Financial announced last week that they were temporarily halting all foreclosures. The White House is dissuading other banks from following suit. While the atmosphere is uncertain, one thing is for sure: Millions of homeowners are waiting with bated breath.

Atila Helvaci is one of many homeowners currently in limbo. In 2007, he and his wife bought their first home just outside Tucson in Sarita, Ariz. The couple was looking for a safe community to raise their children, and the brand-new development fit the bill.

Helvaci originally took out a loan with Countrywide bank. In early 2008, Countrywide was bought by Bank of America and his loan was transferred. For the first year, Helvaci made his payments on time. But in 2008, he lost his second job as a bookkeeper for a local convenience store and soon found himself struggling to make the payments.

"I started digging into my savings and credit cards, and I have over $20,000 in credit card debt right now," he tells NPR's Guy Raz.

By the end of 2008, Helvaci found that he could no longer make his mortgage payments. He called Bank of America to see if there were any modifications it could make to his loan. A representative told him the bank couldn't do anything for him until he actually started missing payments. So for the first time in his life, Helvaci stopped paying his mortgage.

"That was a hard decision," Helvaci says. "I always pay my bills. I never missed a payment for my credit cards or bills."

Helvaci continued to call Bank of America to see if it could put him on a payment plan. Every time he called, employees would tell him the bank was missing documents that were vital in qualifying him for a plan, even though he had submitted the information many times.

"There was always an issue," he says. "I had to keep repeating the same paperwork. And what was devastating was that you would never get the same person. Every time that you called there was someone else and you had to explain [it] to that person all over again, and then you had a different answer from that individual."

The bank eventually agreed to enroll Helvaci in a payment plan, but he still couldn't afford it. He managed to make a few payments with borrowed money from family members, but by June, he could no longer afford to pay the bank.

He received a foreclosure notice the first week of July. The letter stated that on Nov. 30, Bank of America would officially seize his home. "Since I started having problems, I haven't really had sleep," Helvaci says.

News of the foreclosure freeze has done little to calm his fears. In the meantime, Helvaci continues to prepare for the worst: the loss of his home.

So how did we get here? John Carney, a senior editor with CNBC, explains that because there were so many defaulted loans, the banks hired thousands of people who were inexperienced and had very little training. As a result, he says, "loan documents may not have been properly transferred as mortgages went from one company to another."

In the height of the housing bubble, Carney says, there were something like "over a trillion dollars of mortgage-backed securities issued so the potential liabilities are gigantic."

Dean Baker, co-director of the Center for Economic and Policy Research in Washington, D.C., says the White House should force all banks to issue a temporary foreclosure freeze immediately so government regulators can come in to ensure that "things are being done right."

"Because right now, we're supposed to trust the banks, and you know, that seems like a silly proposition at this point," he says. "There's not a lot of reason that anyone would have good faith in the banks."