Accessibility links
The Business Of Burying Internet Search Results Search optimization firms can earn hundreds of thousands of dollars by helping companies or politicians boost their online image and move dirty laundry into the Internet's basement. 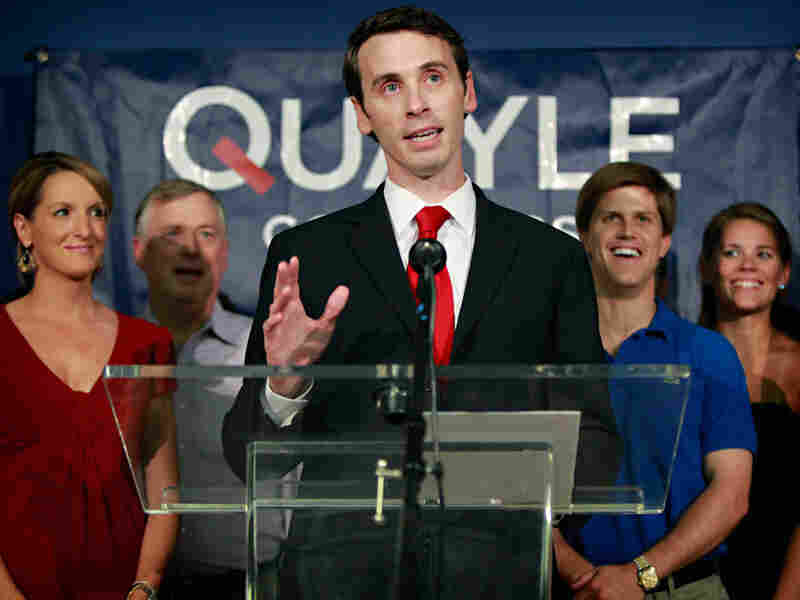 Ben Quayle is running for Congress in Arizona. But his campaign  has suffered, in part, from the prominent ranking of Internet search results that detailed his contributions to an adult website. Matt York/AP hide caption 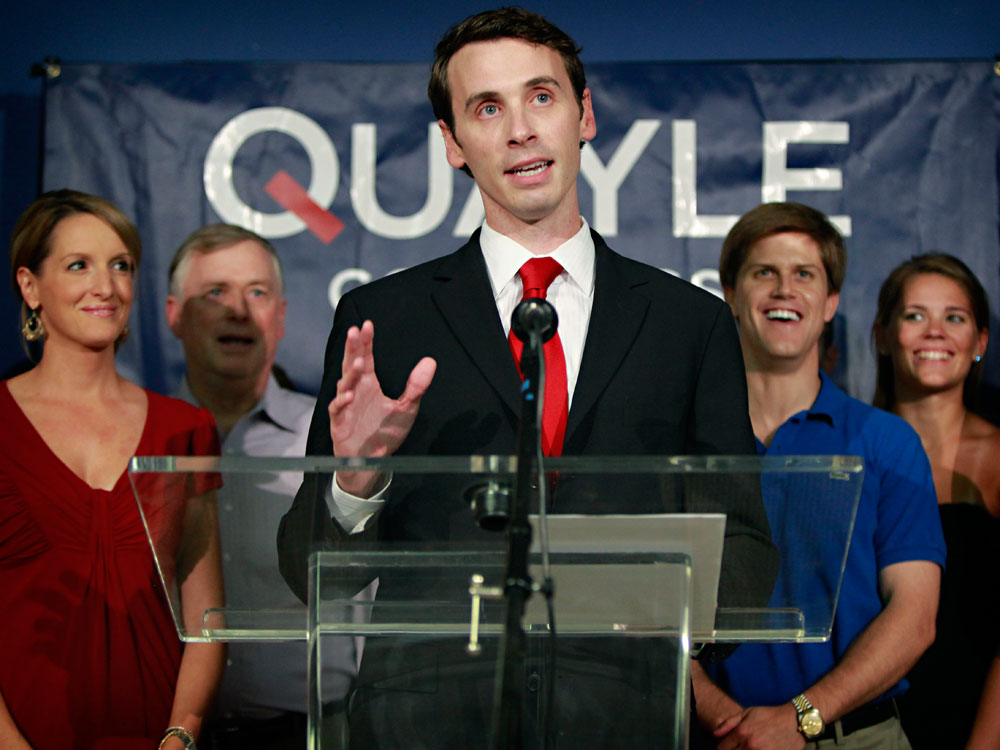 Ben Quayle is running for Congress in Arizona. But his campaign  has suffered, in part, from the prominent ranking of Internet search results that detailed his contributions to an adult website.

The Internet can be a hostile place, with powerful companies paying handsome sums to hide negative content in Google search results or any quest for information that might hurt their bottom line. Unseen battles are waged every day to protect and destroy brands and reputations.

Earlier this year, Fionn Downhill, the CEO of the digital marketing agency Elixir Interactive, had an image problem. An angry customer launched an attack campaign on the Internet by posting a blog that accused Downhill of stealing the client's money.

If you typed Elixir Interactive into Google, the blog was on top of the search results. And the blog made its point in capital letters — it said do not do business with Downhill's company.

"The person who did this knows exactly what they're doing because they knew exactly how to make this present in a very damaging way," Downhill says.

The Business Of Search Optimization

That's why Downhill believes the attack came from a competitor. Elixir Interactive specializes in search optimization, which means people are willing to pay the company up to a half a million dollars to boost their profile on search engines such as Google or Bing. The business also specializes in suppressing negative content.

In her case, Downhill created a barrage of new websites promoting positive content about her business. That pushed the offending blog to the third page of a Google search.

"If it wasn't for who we are, our reputation would have been destroyed," Downhill says.

According to the digital media research firm eMarketer, search optimization -- and suppression -- is a $2 billion industry. Prominent public companies including BP and Toyota spend fortunes in an effort to keep negative press about oil spills or faulty brakes far away from the first page of a Google search.

"It is an absolute game changer, and a fundamental piece of marketing for any company out there," says Jon Kaufman, a senior vice president at the search optimizer Zog Media. He says this industry is about who controls the message.

Ben Quayle, the son of former Vice President Dan Quayle, is a Republican candidate running for Congress in Arizona. Type Ben Quayle's name into Google and it's impossible to miss negative postings about the candidate's racy contributions to an adult website called Dirty Scottsdale.

Kaufman says voters will notice this. "Individuals who haven't made up their minds, they're going to be seriously swayed by what they see here," he says.

A few weeks ago, the dirt on Quayle was actually higher in the search results than his campaign website. And that is a case of brand management failure, according to search experts.

Quayle's communications director, Jay Heiler, says the way his campaign has contained the controversy is to be truthful about it. "The story is out there," Heiler says. "People who are attentive about it are going to see that it doesn't amount to much no matter how much it pops up."

But Kaufman says Quayle's team could do more, including create new Facebook pages, Twitter accounts, YouTube channels and other cheerful digital assets. Then, all the dirty stuff would be long gone, buried in the virtual basement of the Internet.

"One out of every million people is searching in the fifth page of search results," Kaufman says. "No one is going to see the bad stuff about this candidate."

This is where search suppression gets a little sticky. Free speech on the Internet increasingly comes down to who's able to pay for it, and which company is willing to manipulate the listings.

Free Speech On The Web

Search optimization companies are often approached by fraudulent businesses — and it's the search companies themselves that have the power to decide what should be hidden, and what should be upfront and public.

"I'm not going to suppress Bernie Madoff's information — certainly not," Kaufman says. "Is a piece of information about candidate Ben Quayle writing for a magazine something that should really play a part in voters' minds? Who am I to say, but I don't feel it crosses that line."

Ed Magedson, the founder of a consumer website called the Ripoff Report, says the line is crossed whenever anyone messes with the free flow of information. "People don't realize they're making a deal with the devil," Magedson says.

The Ripoff Report is a mecca for information that businesses don't want you to see. Each day, about 800 consumers add to a boiling stew of uncensored complaints against car mechanics, grumpy airlines and even search optimization companies.

Magedson says those companies sell a promise they can't deliver: "Suppressing information on the Internet does not do anyone any good, because it's always going to be found at a later date," he says. "It's still going to be there."

Critics of the Ripoff Report say Magedson actually fuels suppression efforts because he refuses to take down false complaints on his site.

Meanwhile, Google doesn't seem to have a problem with the whole game. As the world's largest search engine, a spokesman there says creating new content to hide negative material is fair play.