Accessibility links
Movie Review - 'Kalamity' - Murder (And Moping) Most Foul Billy heads home after a rough breakup, hoping old friends will ease the heartbreak. Best friend Stanley, however, is clearly going off the deep end as a result of his own split. When Stan's ex goes missing -- and his roommate is wounded -- Billy has to unravel the mystery.

'Kalamity': Murder (And Moping) Most Foul

'Kalamity': Murder (And Moping) Most Foul 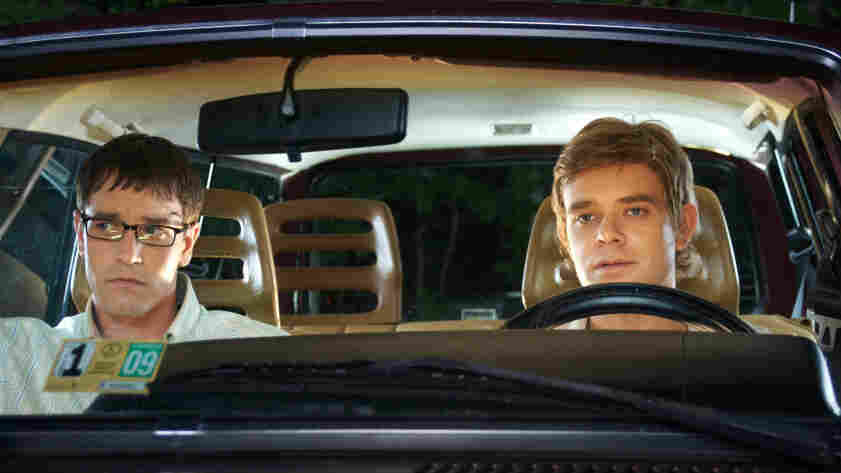 Rated R for pervasive language including sexual references, and some violent content

'Things Don't Turn Out The Way You Want'

Men hurt -- oh, how they hurt! -- in Kalamity, an overwrought, undercooked tale of crazy love and crazier revenge. Focusing on two friends simultaneously facing the dissolution of five-year relationships, James M. Hausler's third feature strains to find drama in their wildly divergent coping mechanisms: one mopes and sees visions, the other fulminates and sees red.

Holed up in his parents' Northern Virginia home, Billy (Nick Stahl) licks his wounds and tries to regroup. His ex, Alice (Beau Garrett), attends college in Cleveland and haunts Billy's mental replays of desultory conversations and aimless couple-speak. Attempts to reconnect with his best friend, Stanley (Jonathan Jackson), are no help: Recently dumped by Ashley (Israeli actress Alona Tal), Stanley veers from aggressive pickup attempts to flares of misogynistic rage. Long before he drives up alongside a young woman at a stoplight and aims a gun at her oblivious head, we know that Stanley and sanity have probably parted company.

Studded with fragmented flashbacks and angsty dialogue, Hausler's screenplay lurches from past to present, from Billy's passivity to Stanley's volatility, with neither logic nor mystery. When Ashley is reported missing and Stanley's roommate (Christopher M. Clark) shows up with a bleeding head wound, Billy is as slow to act as the invisible authorities; instead his tortured voice-over and self-indulgent suffering suggest he's as blind to his friend's emotional state as he was to his ex-girlfriend's.

From mist-shrouded beginning to blood-spattered end, Kalamity is one long whine of male anguish. Women, and their motivations, are irrelevant: Ashley and Alice are either repositories for their exes' insecurities or targets of their fury, and the film's most prominent female role is that of town bitch (and trigger of violent impulses).

And though Billy's quiet self-assessment (and Stahl's increasingly subtle performance) eventually becomes quite interesting, his emotional healing -- and the film's authenticity -- is repeatedly sidelined by Stanley's mounting psychosis. No matter how skillfully Jim Hunter's cinematography slides from wistful to harsh and back again, it's not enough to rescue a story more flaccid than Billy's personality and more confused than Stanley's sense of right and wrong.