Accessibility links
Two Generations 'Bound' By Friendship And Fear In Antonya Nelson's provocative novel Bound, the lives of two high school best friends tragically collide after years of estrangement. Nelson's prose captures the clamor of 21st century life, and the ways in which friends obligate, abuse and occasionally rescue each other. 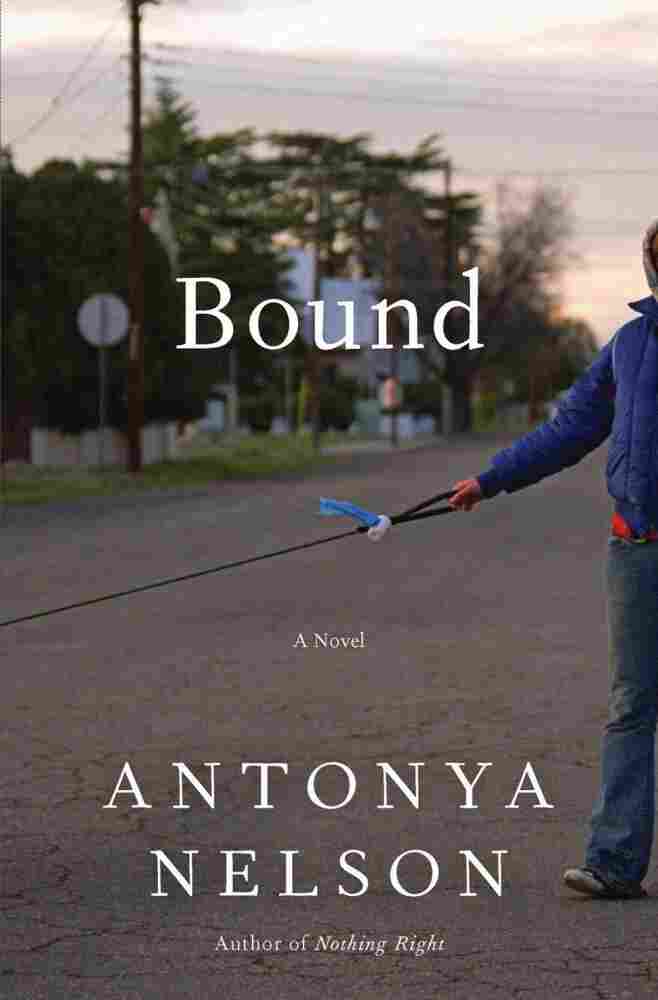 Bound begins from the point of view of Max, a female dog whose hungover owner, Misty, has plunged off a steep road in the Colorado Rockies. The opening lines are typical of Nelson, whose language is precise, provocative and original. "The dog had two impulses. One was to stay with the car, container of civilization, and the other was to climb through the ruined window into the wild." Max survives; Misty does not.

The battle between the civilized and the wild continues throughout the novel, which is narrated from the points of view of far-flung characters who are connected (or bound) in surprising ways. A Houston insurance agent who knew Misty from AA meetings tracks down Misty's 15-year-old daughter Cattie at a prep school in New Hampshire.

Cattie, a tough loner, runs away to a classmate's place in Vermont. There she helps rescue a female dog and her newborn litter from the frozen woods. In one of the innumerable spot-on emotional moments in the book, Nelson describes Cattie watching the mother dog nurse her desperate puppies and being struck with her first outpouring of grief since her mother's death. "It came like a storm, like an act of God, like a bomb. It was sobbing that would last for hours," Nelson writes. 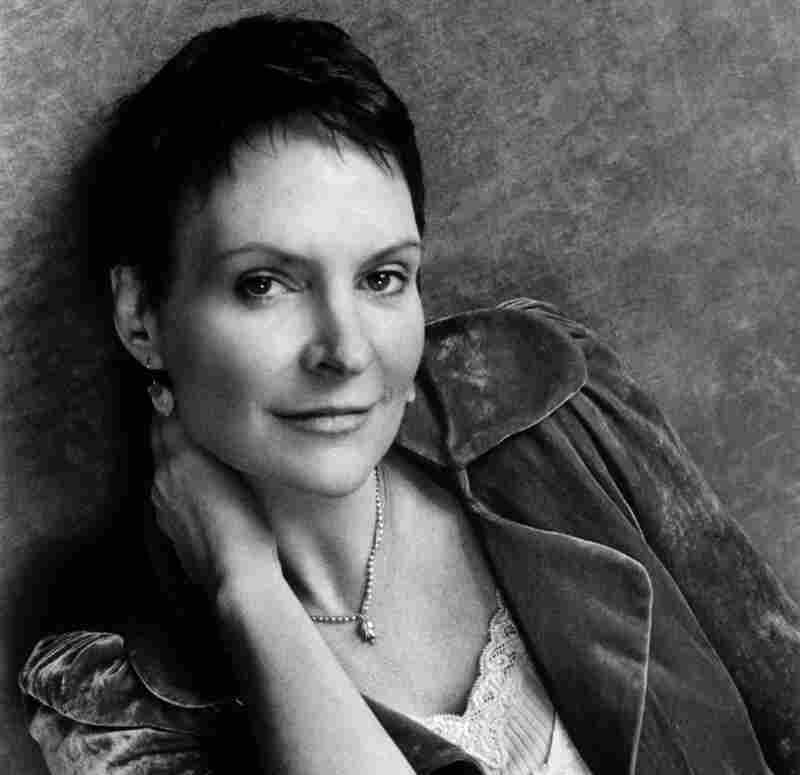 Antonya Nelson's short stories have been published in The New Yorker and Esquire, and anthologized by the Prize Stories: The O. Henry Awards and Best American Short Stories collections. She was selected for a Guggenheim Fellowship in 2003. Marion Ettlinger hide caption 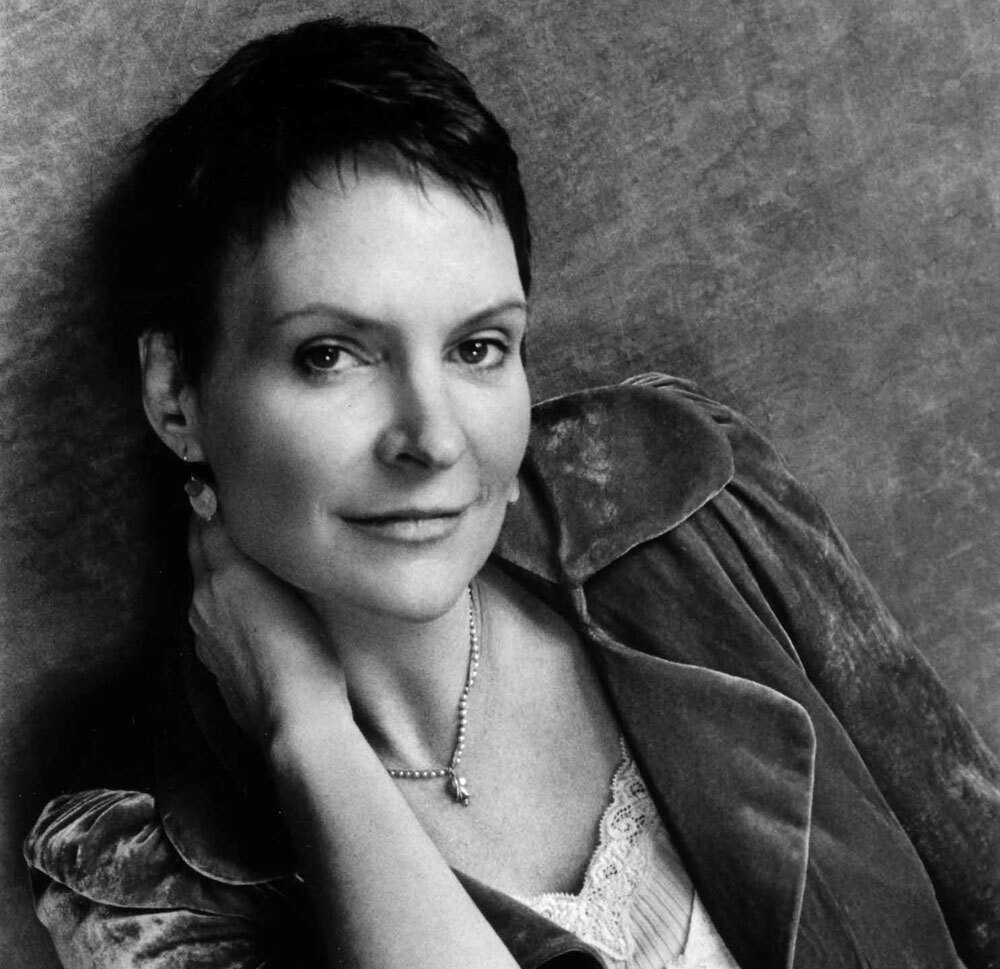 Antonya Nelson's short stories have been published in The New Yorker and Esquire, and anthologized by the Prize Stories: The O. Henry Awards and Best American Short Stories collections. She was selected for a Guggenheim Fellowship in 2003.

Thousands of miles away in Wichita, Kansas, Catherine is shocked to find herself named Cattie's guardian. Catherine is enmeshed in a complex web of her own -- an ailing mother in a nursing home; an older husband already involved with a fourth sweetheart (his infatuations strike him out of nowhere, "like an accident, like a car crash or knife cut"). All this, plus two stepdaughters and two portly corgis -- canine siblings who take the place of children. How can she fit in the newly orphaned Cattie?

In the background is the steady drone of news reports on Wichita's self-named BTK (bind-torture-kill) serial murderer, whose random violence once cast a menacing shadow over Misty and Catherine's drugged-out adolescence. BTK has begun sending threatening messages after lying dormant for 25 years.

As she pulls the tension to a flawlessly calibrated conclusion, Nelson uses details of the BTK killer's gruesome murders as a dark undercurrent to remind us of the ways in which friends, family and strangers obligate, abuse and occasionally rescue each other. In a world in which BTK exists, no one is out of danger, even at home.

The dog had two impulses. One was to stay with the car, container of civilization, and the other was to climb through the ruined window into the wild. Wait with the woman, or dash toward the distant rushing water?

The woman hung suspended, patiently bleeding, barefoot, all over powdered by deployed airbag dust, one palm open like a forget-me-not in her lap, the other hand raised unnaturally high, as if thrown up to respond to a question, fingertips caught in the teeth of the ripped- open moon roof. A signal chimed, tiredly announcing that a door was not latched, or a passenger was not buckled, or a light had been left on, or that some other minor human infraction had been committed. The machine was made to attend to these. Additionally, the tape player played on, a man reading aloud. In other instances, recorded sound sometimes roused the dog's interest  -- animals on television or computer, the doorbell at home in Houston -- but not this man's voice.

This was the car's third accident today. For nearly thirty years, its driver had not had an accident, not since high school. Then in one day: three. First a bashed bumper at the liquor store parking lot in El Paso, she and another woman backing out directly into one another. From above, it might have looked choreographed, perfect comic symmetry, a gentle jolt, the sudden appearance of a car bumper right where there hadn't been one in the rearview mirror. Or like film footage, run in reverse, people parking, unparking. This first accident, which had produced no problems, bumpers doing their jobs, had been in Texas, the next one in New Mexico, and the third in Colorado. The second accident, in New Mexico, was clearly the fault of the dog's owner. Headed north through a tiny town made of trailers, she'd run its only shot-blasted stop sign and been clipped by a westbound pickup. Its driver jumped furious from his cab, shouting and pugnacious before she'd even shifted into park. Her right taillight had been sheared off by his too- big tow bar. The dog would not stop barking at the angry man. For ten minutes the two drivers had had to circle and study their vehicles, the man venting his significant frustration, which took the form of rhetorical questions concerning the whereabouts of her mind, not to mention her driving barefooted.

Hungover, the woman thought, but not drunk. She shook. Her response, often, was to retreat to silence. This had made her a formidable adult, although she'd been mistaken as sullen or dull-witted when she was young. The man finally convinced himself that he wasn't at fault, nor was his truck damaged. And he couldn't much care about an unpretty woman. The drivers left the scene of the accident without reporting it. The other cars that passed -- both local and tourist gawkers -- slowed but did not bother to stop, interested to know if the verbal antics would escalate into something truly entertaining, since clearly there'd been no carnage.

The dog had not ceased barking until her owner settled behind the wheel, slammed the door, blinked into the setting sun from behind sunglasses she had not removed, and turned over the engine. Then they were restored to their humming, air-conditioned peace. For miles, the woman talked to the dog as if to prove that she could, her hands trembling when she finally put in the first cassette of her borrowed book on tape. "Heart of Darkness," its narrator intoned, and thus began the story.

Now the dog was busy navigating a nervous figure eight between back seat and front, stepping gently past the gearshift, tightly circling the passenger seat, her tail inadvertently sweeping beneath the driver's upraised arm, near her hinged, leaking mouth, then squeezing once more over the gearshift, onto the back seat and into her metal kennel, which was intact, although upside down. There she made the motion of settling, albeit on the ceiling rather than the floor of her cage, hopeful that obedience would reinstate known order.

Obeying was her first instinct; she'd been performing these moves, tracing this circumscribed looping path, every minute or so, since the car had gone off the highway and down the cliff. She stepped from the kennel and shook in her abbreviated space, sat suddenly and awkwardly on her tail, like a bear or raccoon, and curled forward to lick at her belly, tempted once more by the sense of the flowing stream beyond the car, yet dutiful to the woman inside. Far above, on the highway from which the car had fallen, a truck downshifted, straining against its own massive weight and force, roaring gradually by. The dog had been whinnying every now and then, an uneasy chatter in her throat, but now squared her front feet on the car console and barked close to the woman's head, teeth snapping unnaturally near the pink cheek flesh, tail waving with hope, anxiety. She had eyebrows, this dog, which gave her the appearance of intelligence, as if she could read minds or understand complicated speech. The woman was in the habit of talking to her. Certain words -- Walk! Treat! Home! -- as well as certain tones of voice inspired a reply. The dog barked again, as if to begin their usual exchange, taking the lead, and then again, insistently, demanding a response, even one of anger, then put her nose to the woman's temple, tasted the blood there, whimpered, her tail now swinging low, pendulum of shame. The man's voice, steadily reading. The other sound, the one she could more truly heed, that of the stream. 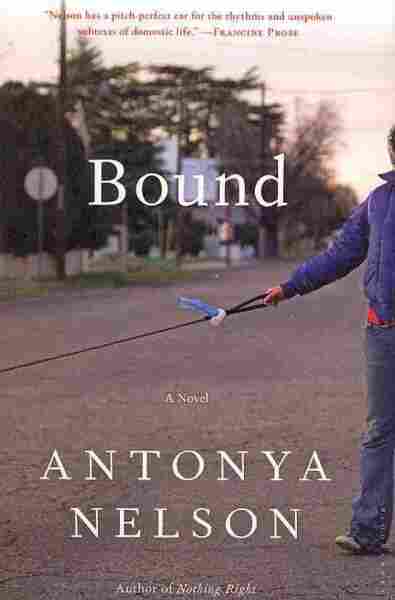