Accessibility links
Sensory Deception: Lab Mice Can 'Smell' Light Scientists are beginning to understand precisely how our brains distinguish one odor from another, thanks to some extraordinary mice that can "smell" light. The research is helping researchers better understand brain circuits in diseases from Alzheimer's to Parkinson's and could lead to better treatments. 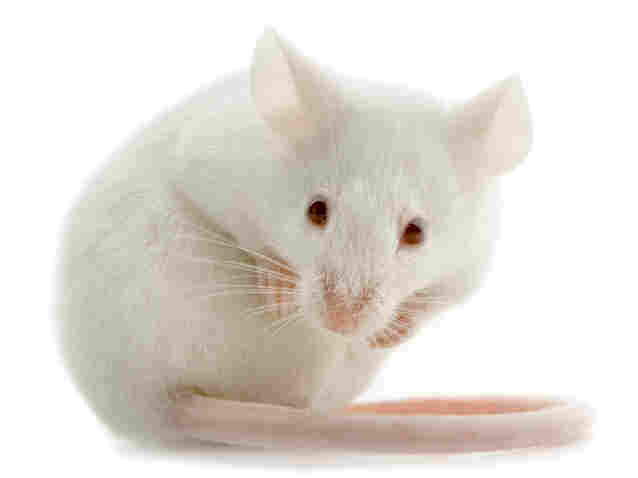 Scientists exposed the brains of specially engineered lab mice to pulses of light and saw brain cells responding as if they were triggered by an odor. The research could be applied to diseases including Alzheimer's and Parkinson's. Eric Isselee/iStockphoto.com hide caption

Scientists are beginning to understand precisely how our brains distinguish one odor from another, thanks to some extraordinary mice.

These mice can "smell" light.

That's possible because their brains contain cells that have been genetically altered to respond to light as if it were an odor. It's all part of a field called optogenetics that is helping researchers understand the brain circuits involved in everything from Alzheimer's to Parkinson's disease and could lead to better treatments.

Optogenetics allows scientists "to activate whatever specific neurons you choose just by shining light," says Venkatesh Murthy, a professor of molecular and cellular biology at Harvard.

Murthy and other researchers from Harvard and Cold Spring Harbor Laboratory used the technique to investigate one particular feature of our sense of smell.

"Let's say that there are three kinds of citrus fruits," Murthy says. "You have an orange, a lime and a lemon. If you really are careful, you can distinguish each of those just from the smell. But you can also say that they are similar."

By exposing the brains of genetically engineered mice to pulses of light, the scientists were able to search for patterns that might explain how the brain distinguishes one odor from another. They expected to find that brain cells responding to one citrus odor, like orange, were physically close to the ones responding to lime and lemon, Murthy says.

But their experiments using light showed that it didn't just matter where the neurons were. It mattered precisely when different neurons responded to an odor by emitting an electrical signal.

"You can find neurons that emit right at the onset," Murthy says. "Another one will emit a little bit later."

And the timing of those emissions appears to play a large part in how mice and people distinguish one odor from another, according to the study that Murthy and his colleagues published in the journal Nature Neuroscience.

This sort of research should help solve other olfactory mysteries, too, Murthy says, like how odors are connected to memories and emotions. And, he says, the new ability to put light-sensitive cells just about anywhere might help people who have diseases that affect the retina.

"Your photoreceptors have degenerated, but your eye is perfectly fine otherwise," Murthy says. "So people are working on putting these light-sensitive proteins in those surviving cells. That will allow you to detect light."

And that's just one potential use of optogenetics, which has been around for less than a decade. Hundreds of labs around the world are using the technique to control all kinds of brain circuits.

"If you understand how different circuits work for memory or depression or motor problems, then you can get at how to treat those circuits in a more sophisticated manner," says Dylan Clyne, a researcher who was involved in some of the first optogenetics experiments at Yale.