Accessibility links
Web Ads Tied To News Photos Pop Up More And More Talk about Photoshopping. With in-image advertising, every photo on the Internet becomes an interactive advertising billboard -- even if it's of celebrities in crisis. The practice raises questions about taste and editorial independence.

Just because you can do something doesn't mean, of course, that you should.

With today's technology, for instance, it's possible to give people who read the National Enquirer online a chance to actually buy a zippered-up crewneck sweater that has "the look" of the top that a cancer-stricken Elizabeth Edwards is wearing in a photo on the home page of the tabloid's website. 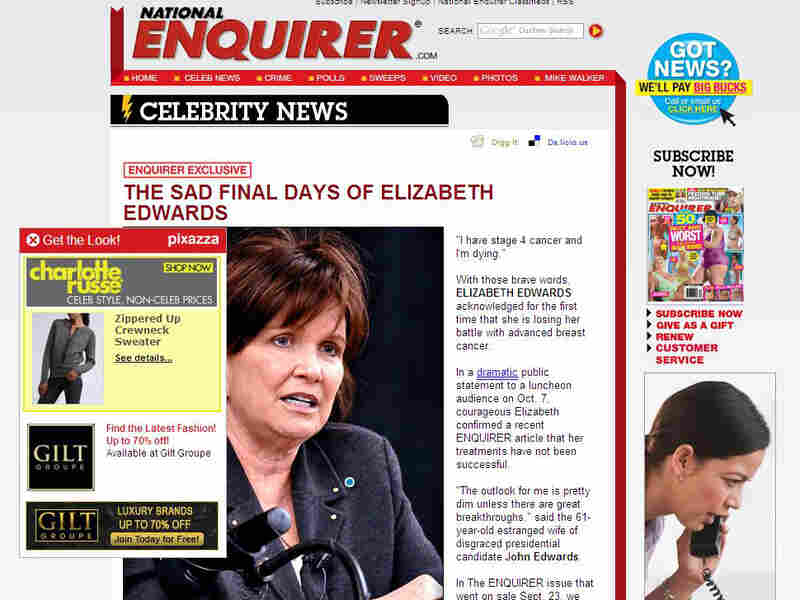 An in-image ad was tied to this National Enquirer story about Elizabeth Edwards. NationalEnquirer.com hide caption

It’s only $36.50 at Charlotte Russe. An ad for it pops up if you scroll over the words "Get The Look!" on the photo of Edwards.

The practice is called in-image advertising, and there are companies, such as Pixazza and GumGum, that specialize in helping websites earn extra money by selling merchandise related to their photographs. To these companies -- and their publishing clients -- every image on the Web, including news photos, is a prime target for interactive billboard advertising.

People want to dress like celebrities. And models. And famous people. Fashion magazines have understood that desire for time immemorial. Now with the Internet, consumers can instantly gratify their cravings by shopping for the clothes they like -- on the celebrities they see -- with simple clicks of a mouse.

"There's always been a relationship between editorial content and advertising, but technology and desperation are erasing the boundary between the two," says Kelly McBride, a media ethicist at the Poynter Institute.

On the celebrity gossip site JustJared, you can click on the "Get the Look" tab beneath a photo in a story about pop star Rihanna -- filming a corn chip commercial --and buy a cardigan sweater like hers for $195 from Piperlime.

But what about a National Enquirer photo that accompanies the story of Kayte Walsh -- girlfriend of TV mainstay Kelsey Grammer -- having a miscarriage? It's a tale of sorrow and suffering. The couple is pictured walking side by side. Thanks to Pixazza, you can buy Patagonia Island Hemp Pants that are similar to hers for $74.95. And lookalike Flojos flipflops for $25.45. 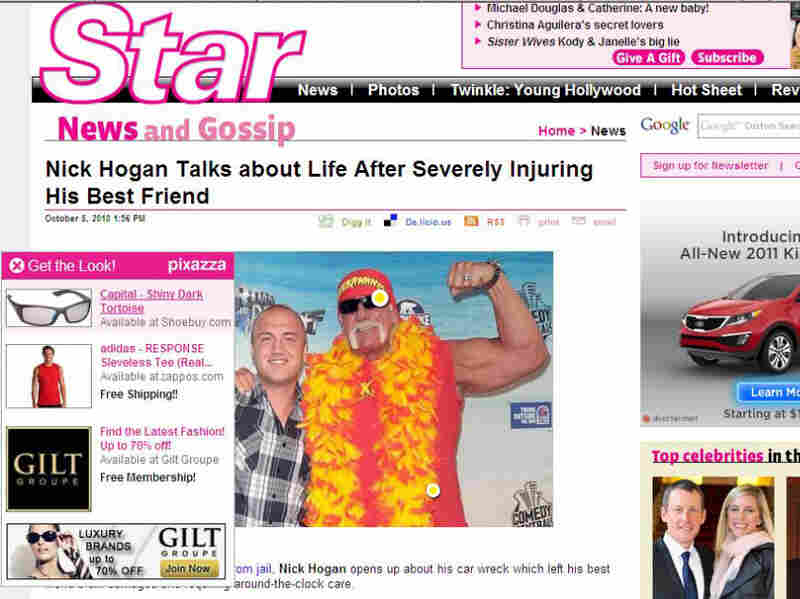 For now, the ad companies are hiring fashion spotters to pore over photos and match up the clothes with similar clothes sold by their clients, according to The New York Times. It reports that "the companies get a small fee from retailers when a shopper clicks on or buys an article of clothing."

In-image advertising is in its infancy. As image recognition software improves, however, the practice will proliferate. Google so believes in the future of in-image advertising, it has joined with other companies to invest nearly $6 million in Pixazza.

Every Newsmaker A Mannequin

News stories will become shop windows and every newsmaker a mannequin. Talk about Photoshopping.

Taken to the extreme, online shoppers will be able to buy a copy of the hat Jackie Kennedy was wearing when her husband was assassinated. Or the T-shirts straight from the mug shots on The Smoking Gun.

And how long before the tables are turned and some politician picks up extra campaign money by wearing certain name-brand clothes?

The in-image phenomenon, says GumGum co-founder Ophir Tanz, is "poised to be a fixture in online advertising, much like traditional ads and video ads." Tanz says that GumGum's goal is to add value to every image on the Internet. That value might come in the form of inserting relevant pop-up or banner ads, making photos "shoppable" by offering merchandise like that seen in the photo, and providing opportunities for users to share images, find related images or enlarge photos to see them better. 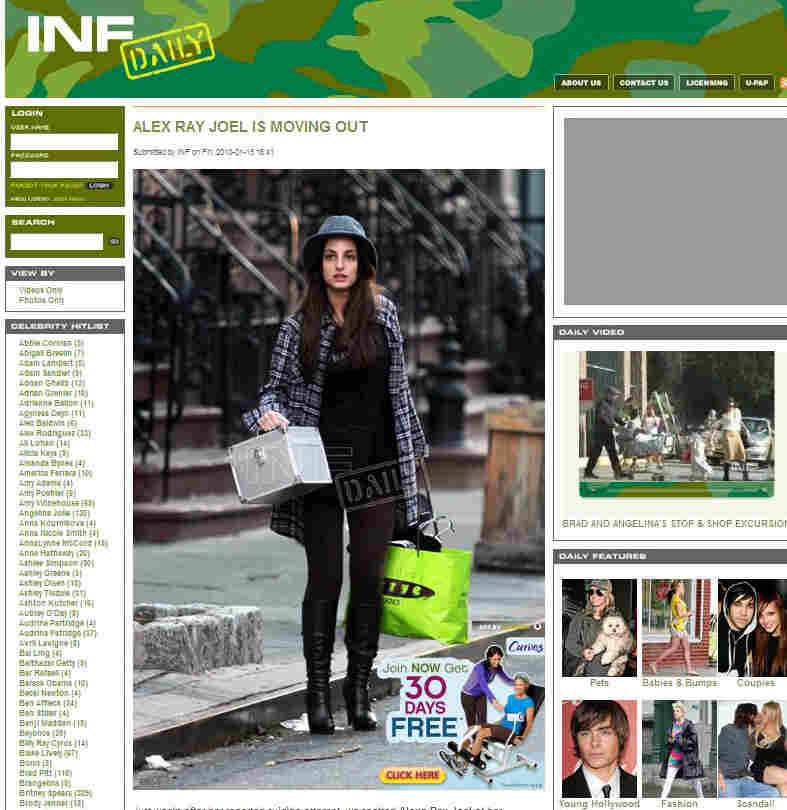 "Certain photos are off-limits," Tanz says. His company will not allow an ad to interfere with, or cover too much of, an image. GumGum doesn't run ads "where there is sensitivity around the image or surrounding the story," Tanz says. And the firm will not run ads related to photos declared off-limits by website publishers.

There is, Tanz says, "an inevitability" that news photos will be used for in-image advertising more and more. "We have experimented with this for some time now," he says. He points to a feature on GumGum's website. Examples of the company's campaigns -- for advertisers like Curves and Fifth on Main -- are shown against a photo in INF Daily of Billy Joel's daughter, Alexa Ray, as she moved out of a Manhattan apartment "just weeks after her reported suicide attempt." (Alexa Ray Joel later said she mistakenly took too many sleeping pills.)

Jody Kramer of Pixazza says her company does draw lines when it comes to certain stories and questions of taste, such as when Michael Jackson died. She says Pixazza also honors publishers' requests to leave photos untagged.

But "it’s not just about monetization of images," she says. "It’s about consumer service. Consumers want to find out more information about photos they see. Where they can get a similar look. How they can get to a particular place. Buy certain clothing."

She says she sees a day when every photo on the Internet is interactive. "Consumers can expect to do more with images," she says. "We are a consumer-driven company."

And where will all this end, this push to turn news stories into interactive shopping malls? Jane E. Kirtley, who teaches media ethics and law at the University of Minnesota School of Journalism and Mass Communication, says, "I suspect that the only way to stop the practice will be if consumers reject it. And I don't hold out a lot of hope for that."

From a pragmatic standpoint, she says, "I'd suspect that news organizations that run these types of ads are likely to get negative reactions from their readers -- and rightly so. They have the right, and I would say duty, to reject advertising that is tasteless."

The rush to turn everything into advertising "could backfire," says McBride. "Although we cling to consumerism as the economic underpinning of much of the media world, all the indicators are that people are consuming less and our values as a society are changing."

You can find a photo of McBride on the Poynter Institute website. And, if you are curious, she says you can get a pink-pearl sweater like the one she is wearing at Ann Taylor.