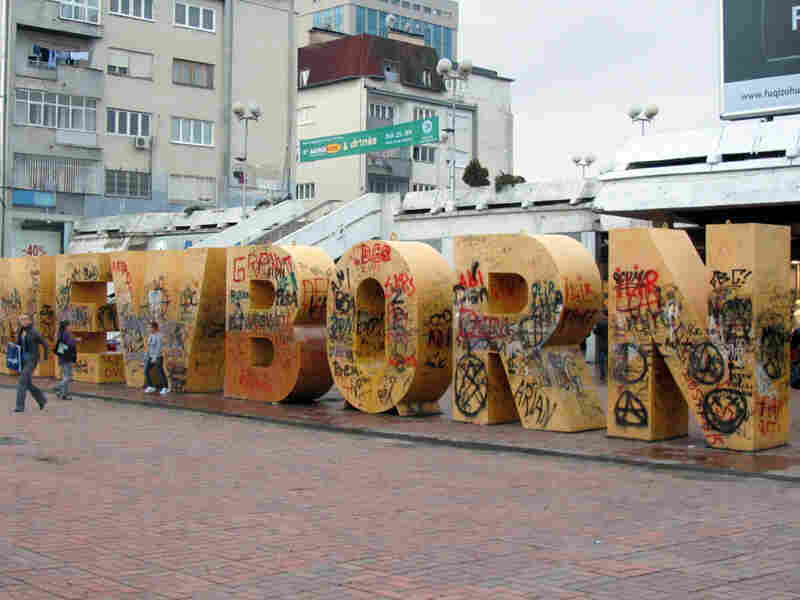 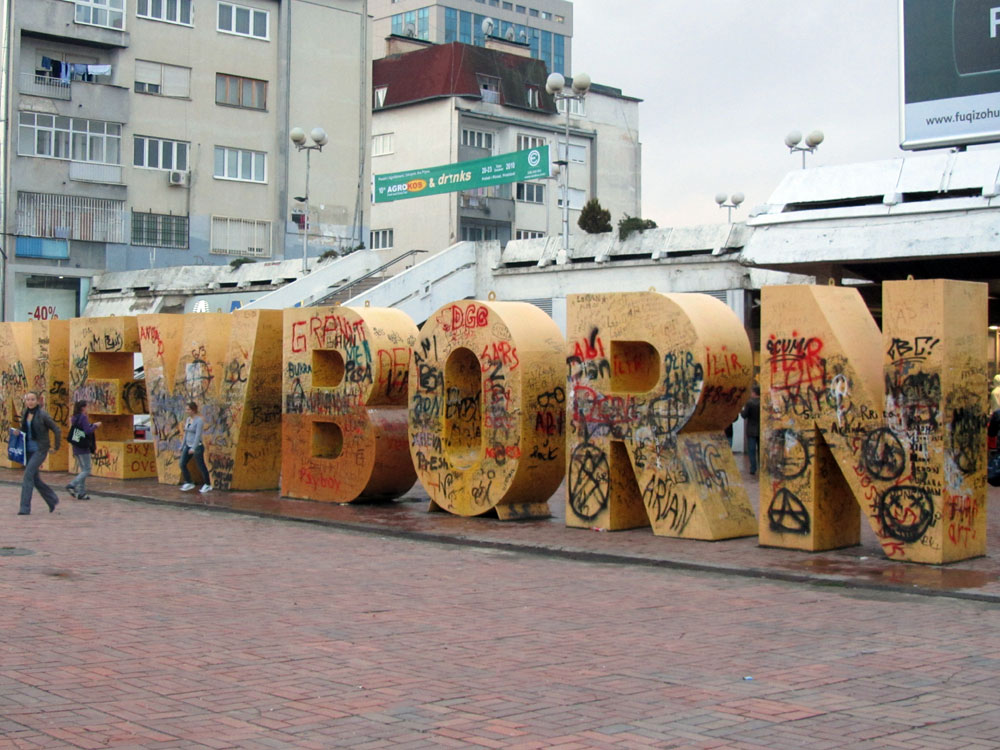 Pedestrians walk past graffiti-covered street art in Kosovo, which continues to suffer from poverty, corruption and unemployment.

Europe's youngest country and one of its poorest, Kosovo faces snap elections following the ruling coalition's collapse on Monday.

The campaign will very likely delay planned talks with Serbia and take place amid popular anger over rampant corruption, a 45 percent jobless rate and mounting poverty.

But there is also curiosity about a new anti-corruption party whose leaders are young and American-educated.

The sounds of Albanian hip-hop blast along the streets of downtown Pristina, the Kosovo capital. Tough-looking men, heads shaven, arms covered with tattoos, cruise around in shiny sports cars.

In the 11 years since NATO bombing freed the majority ethnic Albanian population from Serbia's repressive rule, Kosovo has become yet another Balkan hub of illicit activities.

In 2008, Kosovo became the last piece of territory of former Yugoslavia to become independent, declaring its secession from Serbia. But nearly three years later, dreams of prosperity have been unfulfilled.

Sometimes it is kind of hard to trust the government or our own police. They don't care that much for the population or for people here, more like for themselves.

Arben Hoti, a young Kosovar who hopes to go abroad

The angriest are the country's young -- nearly half the population is under 25.

Arben Hoti, 23, hopes to go abroad. "It is not very safe being here," he says. "Sometimes it is kind of hard to trust the government or our own police. They don't care that much for the population or for people here, more like for themselves."

Twenty-two-year-old Diana Rexhepi is still studying at Pristina University. She says there has to be a change in government. "Students are all hanging out in cafes, which means that after finishing their studies they're left in the street, jobless," she says.

Rexhepi says corruption is suffocating. "Because of corruption, we cannot advance," she says.

A recent report by the International Crisis Group think tank says Kosovo appears to be run by what it calls "a lawless political elite in control of every aspect of society."

Flaka Surroi, owner of the independent Koha media company, says the government is sunk in corruption and is not accountable to anyone. She says half of Kosovo's territory still has no drinking water. But lots of money has been funneled to the lucrative construction field. "We have a road being constructed to airport since two years, I think now. It is 8 kilometers long, and it will cost us 34 million euro [about $47 million]."

Surroi adds that seven bridges are being built over a road "where there is no river -- why? Every bridge will cost us I don't know how many million."

Ariana Qosaj-Mustafa, an analyst at the independent research institute Kipred, says people are so insecure about their jobs and future they are too scared to take part in public debates. "So people do stay obedient," she says. They "do not provide an alternative way of speaking up and speaking against corruption."

International agencies are still active in Kosovo, but organized crime is flourishing. A U.S. State Department report says Kosovo is "primarily a transit country for Afghan drugs destined for Europe." And Kosovo mafias are key players in the sex slave trade.

Crime and corruption have scared foreigners. They have invested only 14 million euro [about $19 million] this year compared with several hundred million last year.

Virtually nothing is manufactured or grown and the population survives on remittances of hundreds of thousands of Kosovars living abroad.

Acute poverty is one thing Kosovo's Albanians share with the few remaining Serbs who have sought shelter in isolated enclaves.

At Gracanica monastery, a major Serbian orthodox shrine near Pristina, the atmosphere is still, as if nothing ever happened outside.

Father Peter is asked whether Serbs accept Kosovo's independence. "History will give the answer. It was 500 years under Ottoman Empire and Serbs believe it will be again part of Serbia," he says.

Northern Kosovo is a small territory not controlled by anyone.

But the mayor of Gracanica, Bojan Stojanovic -- elected last year on a new party slate -- is pragmatic. "Serbs in Serbia are irrational about Kosovo," he says. "They use it to get votes.

"But Belgrade must understand our needs. We can't live off of politics, it doesn't put food on the table."

Not all Serbs take part in the system, though -- especially in the northern city of Mitrovica, where Serb and Albanian crime groups work hand in hand.

Ilir Deda is one of the founders of a new political party that wants to establish rule of law and fight corruption. "Northern Kosovo is a small territory not controlled by anyone," Deda says. "[It's] not controlled by Belgrade, not by Pristina, not by the international community.

"There is an enormous problem with law and order, which is functioning courts and proper policing. Organized crime is very strong; there is insecurity and fear. It is a no man's land," he says.

The new political party is called Fresh Air and has already garnered a lot of support from the young. Deda -- who like the other founders is U.S.-educated -- says the upcoming elections will determine Kosovo's future.

"Does this country, the newest in Europe, stay with unstable institutions and corrupt political elite and with no economic development?" Deda asks. "Or can we work toward economic development, rule of law, anti-corruption and real Euro-Atlantic integration of Kosovo?"