Accessibility links
Whither The Live-Sports Fan? Why break the bank buying pricey tickets to a game when you can watch it at home on a high definition TV? Frank Deford ponders this and more. 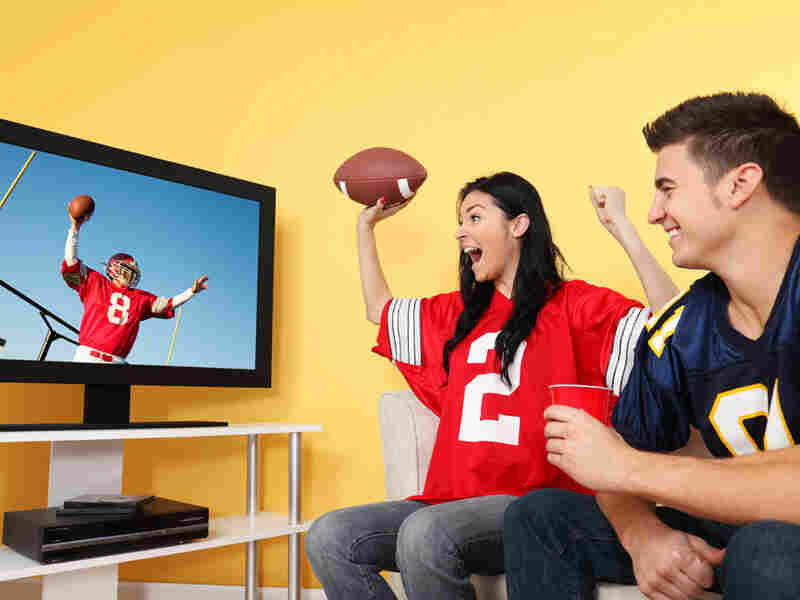 Sideline Viewers: More and more football fans are passing on watching the game from the stadium and instead are cheering on their favorite teams from their sofas. gchutka/iStockphoto.com hide caption

I have the odd sense that what was falsely feared more than half a century ago may be finally coming true now.

When television was new sports team owners were intuitively afraid that if you put games out there for people to see free they wouldn't pay to come out to see the game in person. The NFL was praised to the heavens for having the wisest, restricted TV policy.

But as time went on, the revised wisdom was that far from stunting the growth of live attendance, television whetted the appetite. You wanted to go out and be a part of what you'd gotten a taste of on TV. And cleaner stadiums, more comfortable seats, luxury suites, more convenient parking and public transit made it even more attractive to come on out!

Not only did sports crowds increase tremendously, but owners also got paid more from the TV networks fighting over the chance to televise sports. By now whole generations have grown up expecting every game to be at the beck and call of our clicker. And games televise so clear and gorgeous. Living color? TV clarity today is better than mere life -- it's heavenly. Football, which televises best, has seen NFL ratings go higher than ever.

So I think we're seeing the beginning of a sea change in custom and habit. That's probably accelerated, too, because the owners -- this will come as a shock, I know -- have grown more greedy, and even rich fans are balking at buying seats that have Tiffany price tags. How often do you see games on TV where the best seats are the ones that are empty? That's something altogether new.

But even more important, younger fans have been raised on TV and other electronic entertainment -- these are people who play video games for fun by themselves and who don't communicate so much face-to-face, but text on cell phones. We thought that you had to be at the location to watch something "in person." To younger people today, what's "in person" is wherever their person is.

Besides, everybody has access to huge, brilliant high definition TV. A Nielsen survey has shown, in fact, that sports events are watched by 21 percent more viewers if they have HD. I've talked to folks who've been on the sidelines at the huge new Dallas Cowboys stadium, and, they say, people down there close to the field nevertheless choose to look away from the actual game and watch on the monster video screens above.