Accessibility links
Mexican Border Lake Shooting Still Awash In Mystery It has been three weeks since an American tourist was reportedly shot -- possibly by drug cartels -- while riding a Jet Ski on a cross-border lake between Texas and Mexico. The news is hurting tourism in the town of Zapata, Texas. 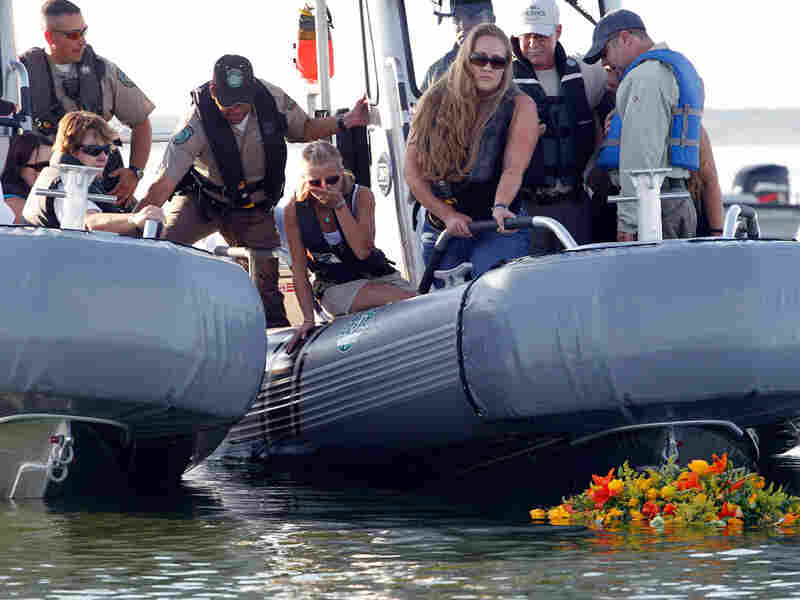 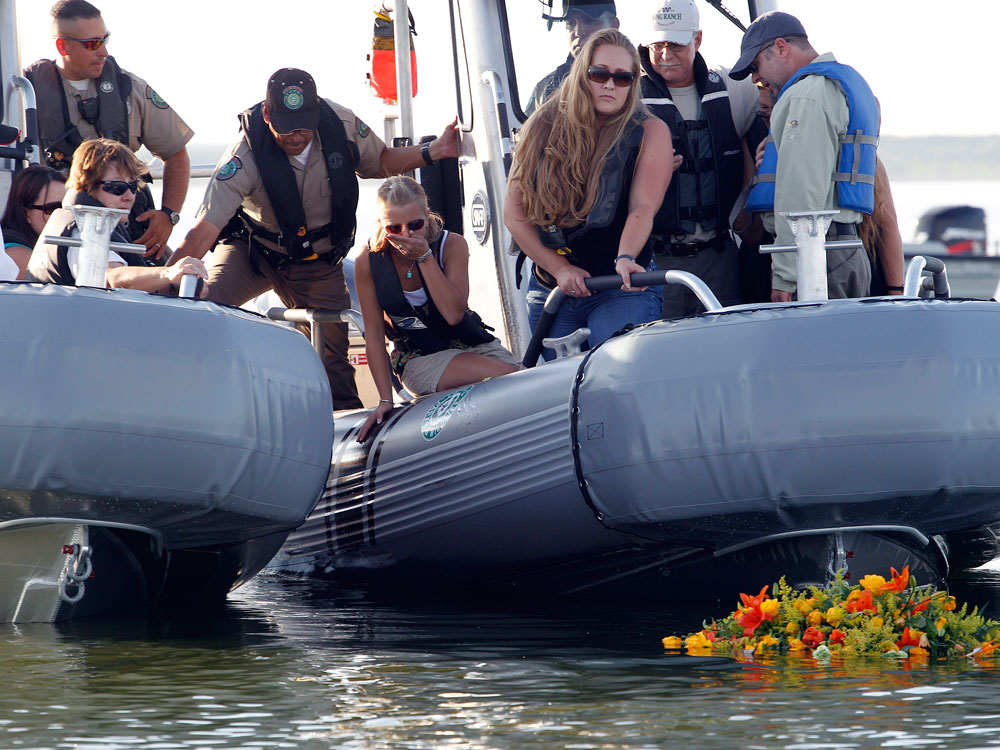 Escorted by Texas Parks and Wildlife, Tiffany Hartley (center) and family members lay a wreath near the site where Tiffany's husband, David Hartley, was reportedly shot Oct. 6 on Falcon Lake in Zapata, Texas.

It has been three weeks since an American tourist was reportedly shot while riding a Jet Ski on a cross-border lake between Texas and Mexico. Authorities believe drug cartel gunmen killed David Hartley in Mexican waters, before his wife sped back to the Texas side to save her own life.

Then last week, the Mexican investigator looking into the crime was gruesomely slain, authorities believe, by traffickers. The news is killing tourism in Zapata, Texas.

The big question is still: Why did cartel gunmen apparently shoot at an American couple on Jet Skis out sightseeing on a Mexican lake?

"Are you sure that your husband got shot?"

"Was he thrown out of the Jet Ski? Was he in the water?"

"He was thrown off the Jet Ski and I couldn't pick him up to get him on mine."

Were Tiffany Hartley and her husband, David, mistaken for rival gang members, taking pictures where they shouldn't have been? Or was violence used in an attempt to steal their jet skis?

A senior U.S. official with knowledge of the border and of Tiffany Hartley's account says the current theory is that the Hartleys ran into three boatloads of armed men who were less pirates than halcones -- lookouts for drug runners. The cartel "ground soldiers," as the official called them, were young and poorly trained, and the Hartleys ran afoul of them.

The federal official, who spoke on background, said there have been two other incidents in the past six months in which two Americans were slain in the same Mexican state, Tamaulipas. They tried to run highway roadblocks manned by drug mafia gunmen. One man was traveling with his family; the other was a mountain biker.

"Think of this as a sort of water roadblock," the official said. 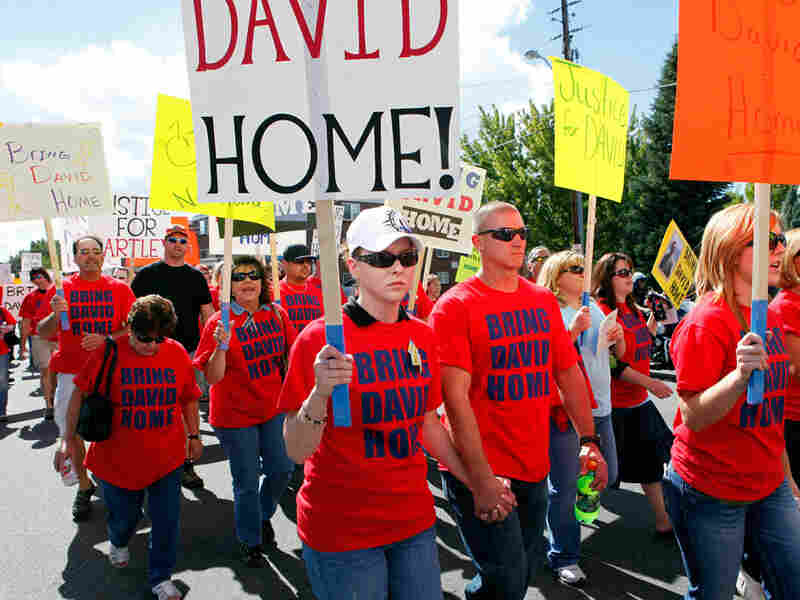 Friends and supporters of David Hartley, who was reportedly shot and killed by Mexican pirates, march in an effort to have his body returned to the United States. Ed Andrieski/AP hide caption 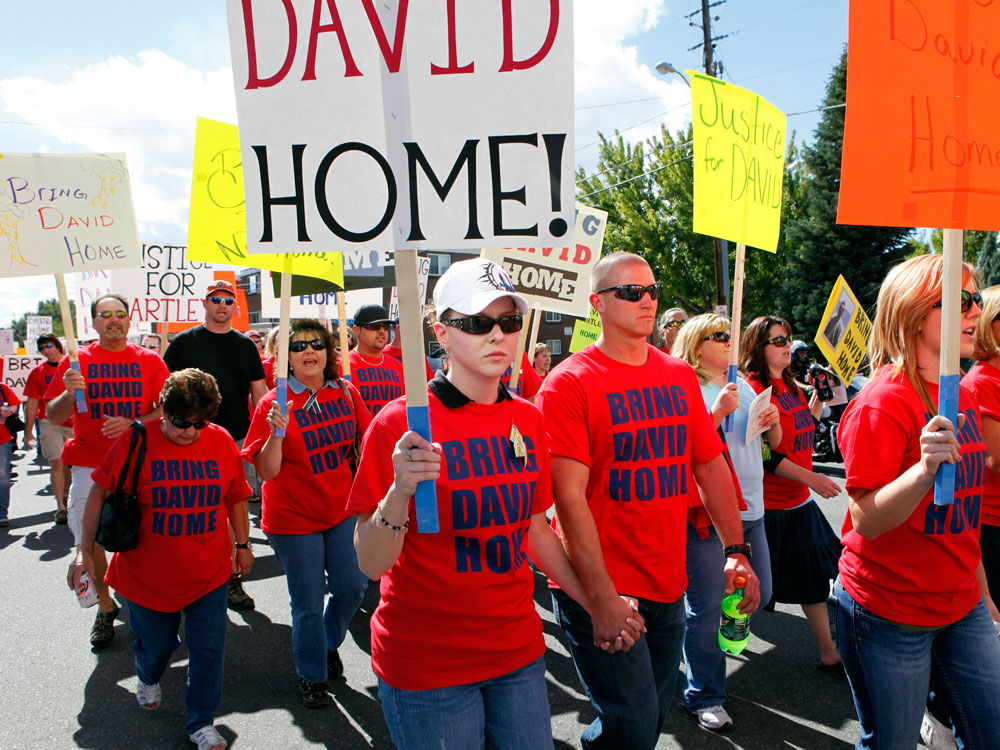 Friends and supporters of David Hartley, who was reportedly shot and killed by Mexican pirates, march in an effort to have his body returned to the United States.

A puzzled U.S. homeland security official added, "This is a weird case. The cartels know that killing Americans is bad for business."

In a chilling development last week, a Mexican state investigator assigned to the case, Rolando Flores, was killed and decapitated, his head delivered in a suitcase to a nearby army garrison.

"We were told that the search was canceled not too much after the death of the law enforcement officer there in Mexico," said Capt. Aaron Sanchez, who works with the sheriff's department in Zapata County, Texas, the lead agency in the case.

He says the message in the decapitation was: "This is our territory. Stay out."

The case has caught the attention of Secretary of State Hillary Clinton, who called the investigator's killing "absolute barbarity."

On Monday, Tiffany Hartley urged Mexican authorities to keep looking for the body before she left Texas for her home in Colorado.

"I don't want to leave without my husband," she said. "That's what it comes down to."

The U.S. official said Mexican investigators are looking for "a new security strategy" before they resume their inquiry. The Mexican federal attorney general's office is now the lead agency in the Hartley case.

The huge Falcon Lake was created 58 years ago by damming up a section of the Rio Grande between Laredo and Brownsville, Texas. It has become one of the most popular bass fishing lakes in the country, and visitors often motor over to the Mexican side to photograph an old partially submerged church.

That's the inlet where Hartley, a 30-year-old oilfield service worker, was reportedly killed. It's the same place where, in April, two separate groups of American anglers were robbed at gunpoint by Mexican men in boats.

The website of the U.S. consul general in Matamoros warns Americans to "exercise extreme caution" while on Falcon Lake, which is -- these days -- heavily patrolled by Border Patrol boats.

Local Chamber of Commerce President Paco Mendoza in the nearby town of Zapata, Texas, seconds that advice.

"Zapata is safe, Falcon Lake is safe as long as you stay on the American side of the lake," he said.

On a recent afternoon, fishing guide Charlie Harralson stowed his gear on his tricked-out bass boat after a day fishing on the lake.

The warnings to stay in Texas waters don't seem to phase him.

"We were in Mexico all day today, and it's just as peaceful as it is fishing right off that dock," he said.

Five minutes later, Justin King backed his flat-bottom johnboat into the water to try to hook a big bass at the end of the day. Will he cast his lure in Mexican waters?