Accessibility links
U.S. To Sell $60 Billion In Arms To Saudi Arabia The package, which includes F-15 fighter jets and attack helicopters, is part of the U.S. effort to build up allies in the region to counter Iran. Congress has 30 days to block the deal, but a State Department official said he's not expecting much opposition from lawmakers.

U.S. To Sell $60 Billion In Arms To Saudi Arabia

U.S. To Sell $60 Billion In Arms To Saudi Arabia 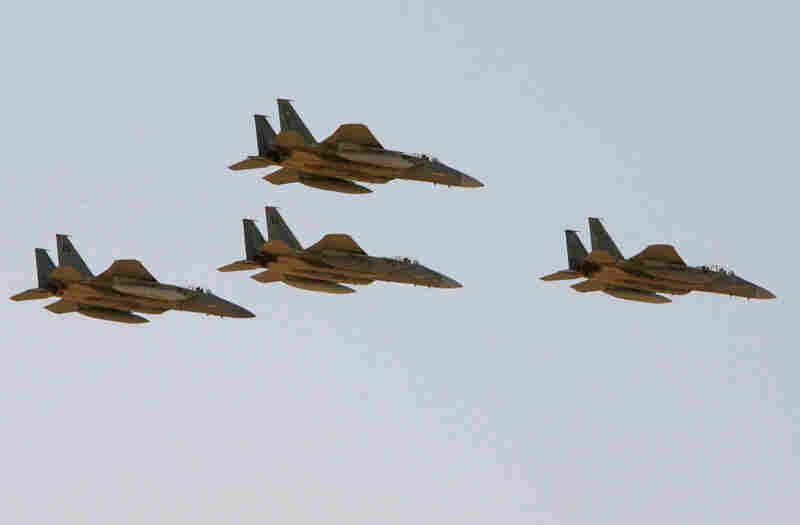 The Obama administration announced Wednesday it plans to sell up to $60 billion worth of fighter jets and helicopters to Saudi Arabia, in one of the largest-ever single U.S. arms deals.

The State Department and Pentagon informed lawmakers that the sales over the next 15 to 20 years will include 84 new F-15 fighter jets, 70 Apache attack helicopters, 72 Black Hawk helicopters and a wide array of missiles, bombs, launchers and equipment such as night vision goggles and radar warning systems.

Assistant Secretary of State for Political Military Affairs Andrew Shapiro said the sales should send a strong message that the U.S. is committed to its partners in the Middle East. "It will enhance Saudi Arabia's ability to deter and defend against threats to its borders and to its oil infrastructure, which is critical to our economic interests," he said.

Shapiro said the arms sales are not solely aimed at countering Iran, though he did point out several times that Saudi Arabia is in a dangerous neighborhood.

Congress has 30 days to block the deal, but Shapiro said he's not expecting much opposition from lawmakers.

"Congress is a big place and there's a lot of members, and there may be differing opinions about the sale," he said, "but we feel comfortable that we have done adequate preconsultations with members of Congress that there will not be a barrier to completing this sale."

He said he's not expecting opposition from Israel, either. The U.S., he said, does not think that selling these weapons to Saudi Arabia will diminish Israel's military edge in the region