Accessibility links
Political Ad's Message To Latinos: 'Don't Vote' A new attack ad in Nevada's heated Senate race accuses both parties of neglecting Latinos -- but dwells on Democrats. It says Democrats like Majority Leader Harry Reid take Hispanic voters for granted, and not voting will send a message. But the ad's producer says that's not what was meant.

A new attack ad popped up this week in Nevada's Senate race, where the slung mud has already spattered both Senate Majority Leader Harry Reid and GOP challenger Sharron Angle. This attack was different. It told Latino voters, "Don't vote." But the consultant who made the ad insists that's not precisely what he meant. 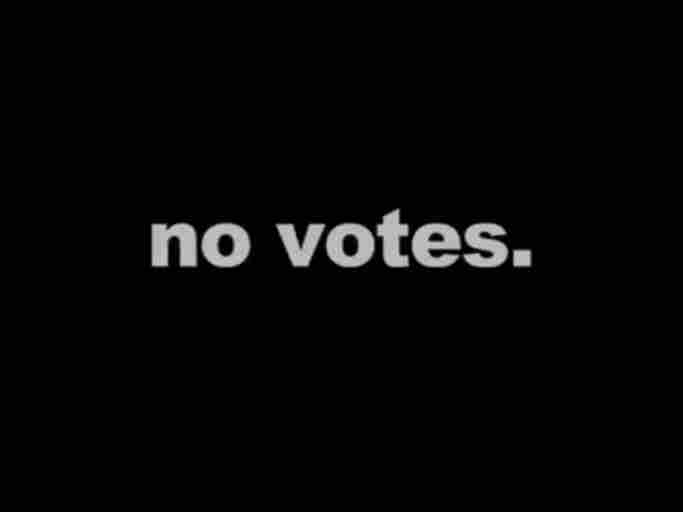 A screen grab from the Spanish-language version of the Latinos for Reform ad shows the message "no votes," or "don't vote." YouTube hide caption

The ad comes from a small group in Virginia called Latinos for Reform. It accuses both parties of neglecting Latinos -- but it dwells on Democrats. It says Democratic leaders including Harry Reid are taking Hispanic voters for granted. It says not voting is the only way to get Democrats to take them seriously.

Reid promptly tied the ad to Angle. At a rally Tuesday in Las Vegas, he said, "Listen to her latest: Running ads on Hispanic television, telling people not to vote. She's trying to keep people from voting."

The ad was scheduled to run on Univision, but the network rejected it.

"That's what we find especially troubling and cynical about the ad," said Brent Wilkes, director of the League of United Latin American Citizens, or LULAC. "It's unlikely that Republicans or Democrats will pay much attention to Latinos if they're not voting."

In the Nevada Senate race, Reid desperately needs the votes of Latinos. They make up more than 25 percent of the population, and the Pew Hispanic Center says that in the 2008 presidential election, they voted 3 to 1 for Barack Obama.

So, is the ad telling them to sit out this election, now less than two weeks away?

Absolutely not, says Robert Deposada, who produced it.

NPR has teamed up with Politifact.com to fact-check ads this campaign season.

More From The Message Machine

In an interview Wednesday, he said the message is to boycott politicians who haven't lived up to their promises. He said there's no attempt to suppress the vote. But there was a problem fitting everything into the 60-second time frame.

This is the first ad by Latinos for Reform this election cycle. Two years ago, the group ran an ad alleging that candidate Obama discriminated against Latinos.

And there are connections between Latinos for Reform and the Republican establishment. Deposada worked at the Republican National Committee and in the Justice Department during President George W. Bush's first term.

But Deposada said Wednesday that Republicans have written off the Hispanic community. And while he's bashing Reid, he said that doesn't mean he's supporting Angle, who has aggressively courted the anti-immigration vote. "Do you prefer to be stabbed in the back or clubbed over the head? I think both are irresponsible, both are horrible options. But, you know what? Sharron Angle is not going to be in a leadership post," Deposada said -- which means at least she wouldn't control the flow of legislation, as Reid has done.

LULAC's Wilkes says Deposada's argument just doesn't hold up. "It's just not believable. I mean, the whole ad is about 'don't vote, stay home.' It's not only the words but the pictures that they show," Wilkes said.

The National Council of La Raza sent a different message Wednesday. It released a free download by the Los Angeles-based band Ozomatli that tells listeners to "vote your conscience today."