Accessibility links
The Root: Rahm Isn't A Shoo-In For Black Community Rahm Emanuel seems to have everything going for him in his run for Mayor of Chicago: he is energetic, a Chicago native, and he was the Chief of Staff for the first black president of the United States, so why isn't he more popular with Chicago's black community? Lynette Holloway of The Root argues that Emanuel's time in the White House did nothing to convince black voters that he would help them.

The Root: Rahm Isn't A Shoo-In For Black Community

The Root: Rahm Isn't A Shoo-In For Black Community 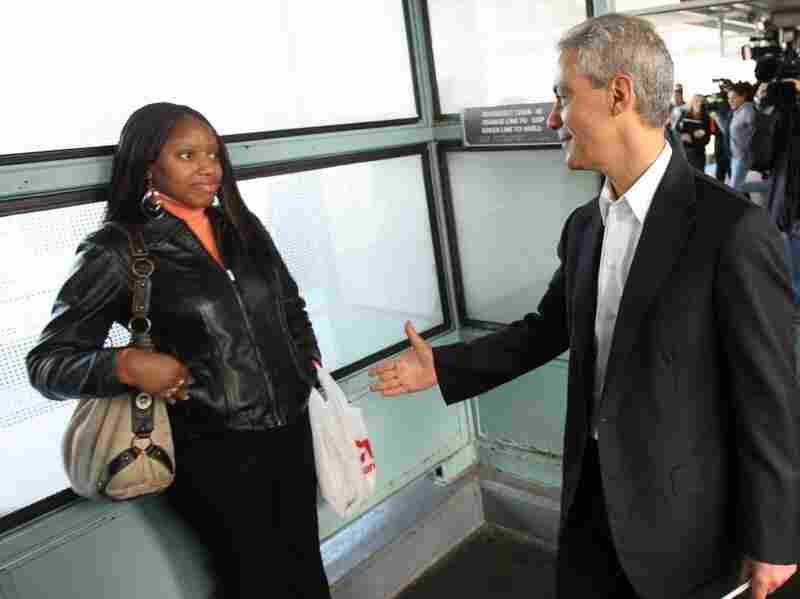 Lynette Holloway is a former New York Times reporter and an associate editor for Ebony magazine.

It wasn't supposed to be this way.

Rahm Emanuel was supposed to receive a hero's welcome in the black community when he announced his candidacy for mayor of Chicago.

Emanuel was supposed to ride a wave of popularity to his next public office. But so far he has been spurned by some black leaders, ministers and residents who have a "What have you done for me lately?" attitude.

When Emanuel hit the campaign trail earlier this month, he crisscrossed the city and made a stop at a South Side restaurant where a group of men told the Associated Press that he had to convince them he was prepared to make a difference in the black community.

What gives? He's a native of Chicago and lived with his family in "the Chi" while representing the city in the U.S. House of Representatives between 2003 and 2009.

It is unclear whether the disengagement is because Emanuel failed to connect with the black community during his years in Congress or because, given Obama's falling poll numbers, his close link to the president is backfiring.  Some Chicago-based political strategists and voters we spoke to say it is a mixture of both. Emanuel's campaign office did not respond to a request by The Root for an interview.

In any case, it's increasingly clear that he didn't gain momentum with the black electorate from his time in the White House. "Rahm Emanuel is talented, bright and energetic," said Congressman Danny K. Davis, who is himself considering a run for mayor, in an interview with The Root.

A former director of the Cook County Democratic Party, who asked not to be named, said the fact that Emanuel is close to Presidents Obama and Clinton means nothing to Chicago's black community.

"It doesn't resonate," the former official said. "He's gonna have to prove to every constituency that he is concerned about them. He will not win votes simply because he was chief of staff for President Obama. That is not an automatic pass."

"Serving as chief of staff to President Obama does not give him automatic currency in the black community," echoed an African-American doorman who has worked in Chicago's Gold Coast neighborhood, one of the wealthiest, for nearly 20 years. He asked not to be named out of fear of losing his job.

"In fact, it might work to his detriment," said the doorman, who has seen panhandling grow over the last year along the Magnificent Mile, an upscale shopping district in the city. "The people of Chicago still love President Obama, but a lot of working-class people from the South Side feel that he hasn't done much for us. I built him up in my mind, with help from marketing, to be something that he's not. I thought he would be a straight shooter rather than a politician. I think Rahm Emanuel will suffer from some of that and because of his track record -- or lack thereof -- in the black community."

That could hurt him plenty in a city where African Americans make up 437,547 -- or 33 percent -- of the 1.3 million likely voters, according to Labels & Lists, a voter-data agency. Whites make up 36 percent of the electorate.

Delmarie Cobb, a longtime political strategist and former press secretary for the Democratic National Convention, described Emanuel's efforts in the black community as Sisyphean, saying he never made a connection during his years in office, and it's insulting for him to try now.

"I don't know of any new African Americans he helped get elected to Congress," said Cobb, who has done work for Congressman Bobby Rush and Bill Clinton. "Tell me, what African American did he help get elected besides the president? That's between them, anyway. He has done nothing for the African American. When he was in Congress, what did he do about youth violence? Somebody else's good fortune has nothing to do with others. Sure, if Obama were doing well in the polls, it would help him a little, but it's not transferable."

Truth is, Emanuel's local legacy works as much against him as for him with black voters. His congressional district encompassed much of the North Side, not the predominantly black communities on the South or West sides. He worked on current Chicago Mayor Richard M. Daley's staff during tumultuous times, including when Jon Burge, a former Chicago Police Department detective and commander, was accused of using interrogation tactics that outraged the black community, prompting protests from the Rev. Jesse Jackson Sr.

Then there's the desire by some African-American leaders to once again see someone black become mayor of Chicago -- something that hasn't happened in more than 20 years. They believe the time is ripe, with the nation's black unemployment rate almost double the national average of 9 percent, and with violence and foreclosures at an all-time high in the city.

They hope they can use the same energy of black-voter disenfranchisement that helped propel Chicago's first black mayor, Harold Washington, into office in 1983. Eugene Sawyer was the city's last black mayor, and he was elected by the City Council to serve for 17 months after Washington's untimely death in 1987.

The Chicago City Council's Black Caucus, clergy and other leaders are working to throw their support behind a single hopeful. Eight African-American candidates appeared at a forum on Oct. 17 at Bethel A.M.E. Church on the city's South Side to make their pitches for the job to replace Mayor Daley. The event was closed to the media.

Despite all that, it's still too early to tell whether Emanuel's chances with black voters will improve. Voters will head to the polls on Feb. 22 to vote on the candidates. If no one receives more than 50 percent of the votes, the two who receive the most will have a runoff in April.