Accessibility links
Foreign Policy: Goodbye To Britain's Defense Budget Britain's latest economic woes continued this week with the announcement of large cuts to the military budget. Alistair Burnett of Foreign Policy argues that going forward Britain will be less interested in military interventions like Iraq and Afghanistan, but seems committed to remaining a useful ally of the U.S. 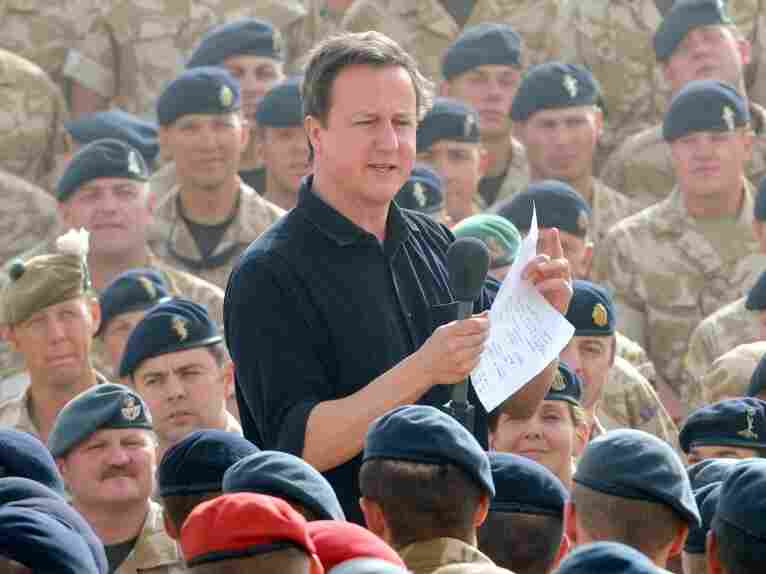 The British government's Strategic Defense Review published Tuesday has been a gift to headline writers -- "HMS Inglorious: 5 billion carrier Fiasco" thundered the Times, while the Telegraph's take was "New Navy Lark: new carrier will be sold after 3 years."

These headlines, based as they were on partly accurate leaks, hit the newspaper stands before Prime Minister David Cameron even announced the full details of his new military plans -- foisted upon him by the need to cut the general budget deficit of more than £150 billion and a £38 billion overspend at the Ministry of Defense -- to the House of Commons.

Perhaps the hostile reception was inevitable given that the review involves substantial cuts of eight percent in the defense budget by 2015. On the other hand, it could have been worse: Far more dramatic cuts of up to 25 percent were being discussed in the summer.

But if the government was hoping for understanding or even support from the media, there has been little on offer, even from Cameron's supporters in the right-wing press.

The reaction from defense experts has been a bit warmer. Paul Cornish of the leading think tank Chatham House had feared the review would be a traditional bit of British "muddling through," but he told the BBC he's pleasantly surprised. "They're saying: Let's have a risk-based approach to national security and defense. They're delivering it, and I think they ought to be, in a sense, complimented for it." And Jane's Strategic Advisory Services argues the government has retained its core military capability in spite of the cuts.

Despite these warm words, three main criticisms have been leveled at Tuesday's announcements.

The government has been accused of not being strategic because the changes are not matched to the country's security requirements (announced earlier this week in the National Security Assessment). The critics also charge the review has been driven by the Treasury's need to cut the deficit, not the Ministry of Defense's requirements for personnel and equipment (which were announced only a day before the government revealed its program of spending cuts). The other main complaint is that the review is a rush job -- it has taken only five months compared with the 18 months taken by the previous government when it came to power in 1997.

So when Cameron stood up in the House of Commons to tell MPs about the plans, he sought to rebut these criticisms directly. He said his government had looked at all elements of security, not just defense, and that other departments -- the Foreign Office, the Home Office (responsible for counterterrorism, for instance), and the Department for International Development -- had been involved in the process. He argued that the review would create modern, flexible armed forces equipped for future threats. He also said that, from now on, Britain will follow the U.S. example and hold a strategic defense review at regular intervals.

Cameron said there would be no impact on the funding for forces fighting in Afghanistan, but he did go on to announce significant cuts in military capability. There will be manpower cuts in the Army, Navy, and Air Force totaling 17,000 personnel. The 20,000 British troops still based in Germany 20 years after the collapse of the Soviet Union will be brought home and the Army will have fewer heavy tanks and artillery. The Navy will retire its remaining aircraft carrier and naval strike aircraft early, leaving Britain without a carrier until the ones now under construction enter service at the end of the decade. The Air Force has lost its replacement for the Nimrod maritime reconnaissance aircraft, which has been plagued by delays and cost overruns.

Last week, U.S. Secretary of State Hillary Clinton said she was "worried" that Britain and other NATO allies would make cuts that undermined the alliance's military capability. So is Washington reassured now? Ahead of his announcement, the White House said that Cameron had briefed President Barack Obama, telling him Britain would remain a first-rate military power, committed to NATO.

In practice, this means Britain will still have the capability to field up to 30,000 troops anywhere in the world, fewer than joined the invasion of Iraq in 2003, but more than are in Afghanistan today. The prime minister also said British special operations forces would be strengthened and ready for immediate action around the globe.

The new government in London has already identified the United States and France as Britain's future strategic allies -- a decision underlined by Cameron's announcement that the new aircraft carriers will be modified so they will be interoperable with U.S. and French aircraft. He also said Britain would buy the more powerful version of the new F-35 Joint Strike Fighter, which is being developed in the United States with some British funding.

Party politics clearly intruded Tuesday, though, when disagreement within the new coalition meant one very big decision was put off. Cameron's Conservatives and their Liberal Democrat partners are split on how to replace Britain's aging Trident nuclear weapons system, and for now they have agreed to disagree: The main decision has been postponed until after the next election, when they might no longer be in government together.

Nuclear weapons or not, it seems clear Britain intends to remain a useful ally to the United States and its NATO partners, with a renewed attempt to work more closely with the French.

What remains open to question is how that power will be used in the future. Cameron also signaled that Britain would be less interested in large-scale military interventions along Iraqi or Afghan lines, and instead would focus more on using diplomacy and aid to prevent conflicts from breaking out in the first place. It's just as well: That might be all a cash-strapped Britain may be capable of doing anymore.