Accessibility links
The 'Incumbency Effect' Isn't So Effective This Year Historically, more than 90 percent of incumbents win re-election in Congressional races. But for many Democrats, especially those who've only been in office for a term or two, being an incumbent isn't shaping up to be an advantage this year.

The 'Incumbency Effect' Isn't So Effective This Year

The 'Incumbency Effect' Isn't So Effective This Year 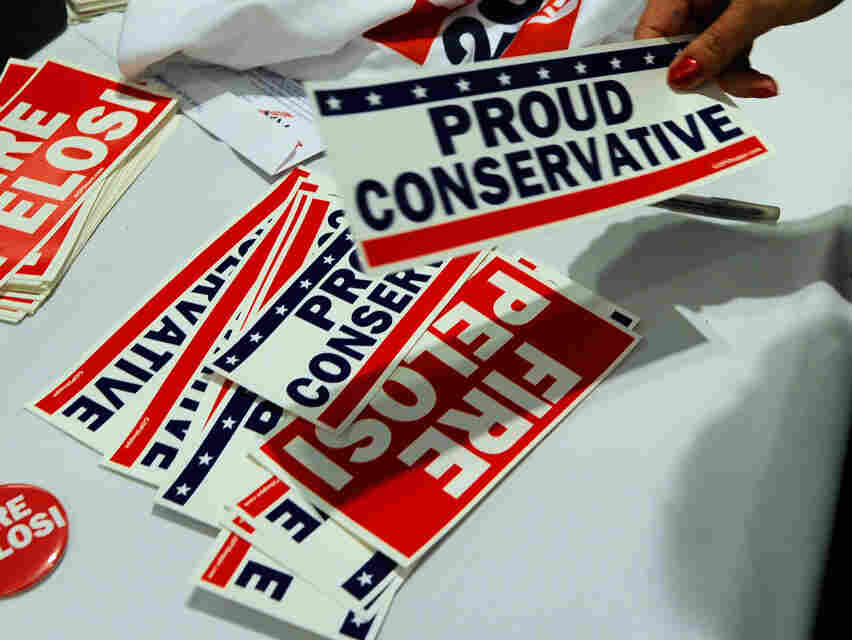 Democratic incumbents are in conservative voters' sights, as the buttons, stickers and T-shirts for sale at a Republican rally in Anaheim, Calif., earlier this month show. Kevork Djansezian/Getty Images hide caption

The conventional take on national elections is: The candidate already in office nearly always wins.

Political scientists call this "the Incumbency Effect." It's especially true in elections for the House of Representatives, which occur every two years. In the past 17 congressional elections -- since 1976 -- more than 90 percent of representatives in office have won re-election.

But this year is looking different. And, for many Democratic incumbents, difficult.

In fact, political observers are questioning whether the incumbency seawall can hold against the so-called Republican Tsunami -- forecast to sweep across the country in the midterm contests on Nov. 2 -- next Tuesday. At present, there are 255 Democrats and 178 Republicans in the House.

Gary C. Jacobson, a political science professor at the University of California, San Diego, has been specializing in congressional elections for more than 30 years. The 2010 elections, he says, "will be a severe test of the incumbency advantage, because it is the only thing standing between Democrats and the Tsunami."

Aside from the troubled economy, Jacobson says, the main bugaboo for the incumbent Democrats "is that they hold so many seats in Republican-leaning districts." He points out that Democrats hold more than 60 seats in which support for 2004 Democratic presidential nominee Sen. John Kerry was less than 47 percent. Also, he says, "Republicans have a structural advantage in the distribution of their usual voters. Democratic voters are more concentrated in lopsided, generally urban districts."

The action, he adds, "will be mainly in the districts taken by the Democrats from Republicans in Republican-leaning districts in 2006 and 2008."

When all of the votes are counted, 2010 may prove to be a complete reversal of 2006 and 2008, when Democrats, especially in the South and in conservative districts, won GOP seats because of dissatisfaction with Republicans. As The Washington Post has noted, 49 Democrats hold seats in districts that were carried by John McCain in 2008.

The upshot is that, especially for Democrats in the House, incumbency may be cumbersome.

A Bent Toward Incumbents

The Incumbency Effect is a truism. In 1994, for instance, when the "Republican revolution" swept through the land during President Bill Clinton's first term and the GOP took 52 seats, the turnover rate in the House was only 20 percent. As Stephen C. Erickson showed in his Cato Journal essay "The Entrenching of Incumbency: Re-elections in the U.S. House of Representatives, 1790-1994": "91.3 percent of all incumbents who ran in 1994 defeated their challengers."

The term "Incumbency Effect" is often traced back to an influential article in 1975 titled: "Name Familiarity, Reputation, and the Incumbency Effect in a Congressional Election" by Alan Abramowitz, a political science professor at Emory University. "The electoral advantage of incumbency is perhaps one of the best known and least understood facts of American political life," Abramowitz wrote. "Nowhere is the advantage of incumbency more clear than in elections for the U.S. House of Representatives."

Among the House races where a Democratic incumbent faces a strong challenge is this one in the Sunshine State:

Kosmas is facing a serious challenge from Republican Sandy Adams, a state legislator for eight years. And, NPR's Ken Rudin points out, the two candidates will put the Incumbency Effect to a very tough test on Nov. 2.

In his study, Abramowitz pointed out the advantages that incumbents have over challengers. It's easier for incumbents to martial campaign resources, such as money, volunteers, group endorsements and party support. Incumbents get more frequent publicity than challengers. Incumbents enjoy "free" mail and communications with their constituents. Voters more often know the names and faces of people in office.

When Abramowitz is asked if he agrees with Jacobson that 2010 could be an anomalous year when it comes to incumbency, he says, "Gary is correct."

In other words, the Incumbency Effect might not be so, um, effective this year.

Abramowitz agrees that the Democrats are liable to lose a lot of seats because of a combination of normal midterm voting patterns that favor the opposition party, the Democrats' need to defend a large number of seats in Republican-leaning or marginal districts and a high level of discontent among the electorate.

"However," Abramowitz cautions, "as always, the large majority of Democratic incumbents will survive, most easily, because they are in solidly Democratic districts and/or have weak challengers." He expects the GOP to pick up anywhere from 40 to 60 seats in the House.

Jacobson's predictions are similar. "I think the Republicans will gain about 45 seats in the House," he says, "but it could be anywhere from 30 to 60. We just don't know."

He adds: "All of the prediction models have large error terms, so almost nothing is ruled out."

Lining Up Early To Vote

In late September, a Pew Research Center/National Journal poll showed that while only 13 percent of Americans surveyed gave Congress (the institution) positive grades, 28 percent gave their individual representatives good or excellent marks, and 43 percent felt that their representatives were "in touch" with their constituents. The same number, 43 percent, believed that the incumbent House member "can help bring about change in Washington," while only 32 percent said their representative "has been in Washington too long."

And 42 percent of those surveyed said their incumbent representative "does a good job of bringing projects" to the home district.

There is a sense among voters, Lee Miringoff, director of the Marist Institute for Public Opinion, told McClatchy newspapers, that politicians who are familiar to voters "aren't automatically thrown in the junk heap ... but the pressure will be on for incumbents to justify their re-election more this time."

Wendy Schiller, a political science professor at Brown University, says the Incumbency Effect is almost always weakened in midterm years under unified government. One exception, she says, was 2002, when George W. Bush was president and Republicans gained four House seats.

This year, with a Democratic president and Democratic control of the Senate and House, Schiller says, "the Republicans have done a good job of persuading voters that they can register their anger and make a change, so voters feel engaged and empowered. When voters believe that their votes will change the course of policy and even control of government, they line up early in the morning to vote."

Reflecting the findings of the Pew poll, Schiller says the Incumbency Effect is grounded in local constituency service. "In a year where national issues reign supreme," she says, "even the most diligent incumbent will be in danger of losing their seat."

Some incumbents use a more graceful exit strategy than losing. They retire. But "retirements are not unusually high" in the House this year, Gary Jacobson says. In fact, only 20 Democrats and 23 Republicans will ride off into the sunset -- perhaps just ahead of a coming tsunami.