Accessibility links
'Sticky' Bombs, Guns With Silencers Take Toll In Iraq Violence in Iraq remains well below the levels of 2007, but there has been a wave of targeted killings in recent months. The U.S. military says that may reflect improved measures by Iraqi forces to prevent blockbuster attacks. But Iraqis are unnerved by the killings. 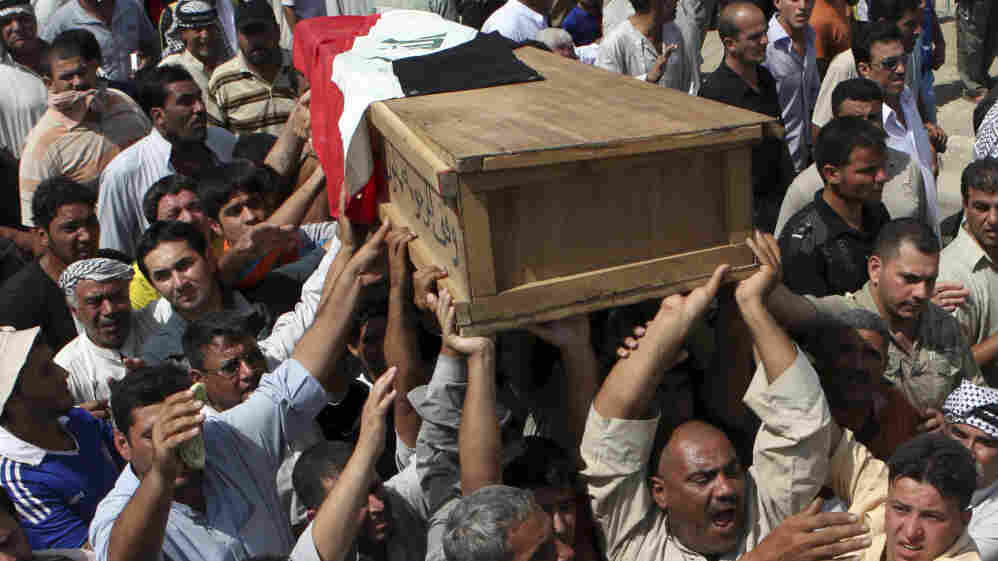 Friends and relatives mourn as they carry the coffin of Iraqi journalist Riyadh al-Sarai during his funeral procession in Baghdad last month. Unknown gunmen intercepted Sarai's car and killed him with silenced pistols. A British newspaper recently reported that magnetic bombs had killed more than 700 people this year, with another 600 shot and killed by silenced guns in a growing wave of targeted violence. Khalid Mohammed/AP hide caption

Violence in Iraq remains well below the levels of three years ago. But in recent months there has been a wave of targeted killings, with the preferred methods being "sticky" or magnetic bombs, and guns fitted with cheap, locally made silencers.

The U.S. military says that the shift in tactics may reflect improved measures by Iraqi forces to prevent blockbuster attacks. But Iraqis are unnerved by the killings.

The numbers of attacks are smaller, but otherwise the stories filling the Iraqi news media are depressingly familiar: Convoys ferrying politicians to their meetings blown apart. Police gunned down at checkpoints by assailants wielding silenced weapons. A journalist blown up by a magnetic bomb attached to his car.

Britain's Guardian newspaper recently cited figures from Iraq's major crimes unit showing that the magnetic bombs had killed more than 700 people this year, with another 600 shot and killed by silenced guns.

Those tallies would have been more like monthly totals during Iraq's bloodiest years of insurgent and sectarian violence. But as the country struggles to achieve stability amid a shrinking American presence, the attacks have sowed doubt among Iraqis about the future. 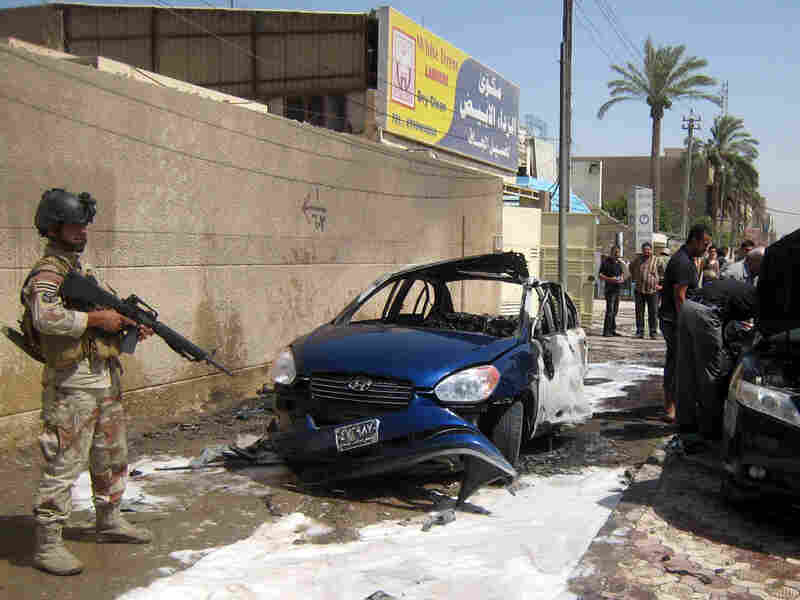 An Iraqi soldier stands guard after the detonation of a sticky bomb plastered to a vehicle belonging to an employee of the Iraqi Parliament in the Mansur district of Baghdad in June. The explosion injured two people. Khalil Al-Murshidi/AFP/Getty Images hide caption 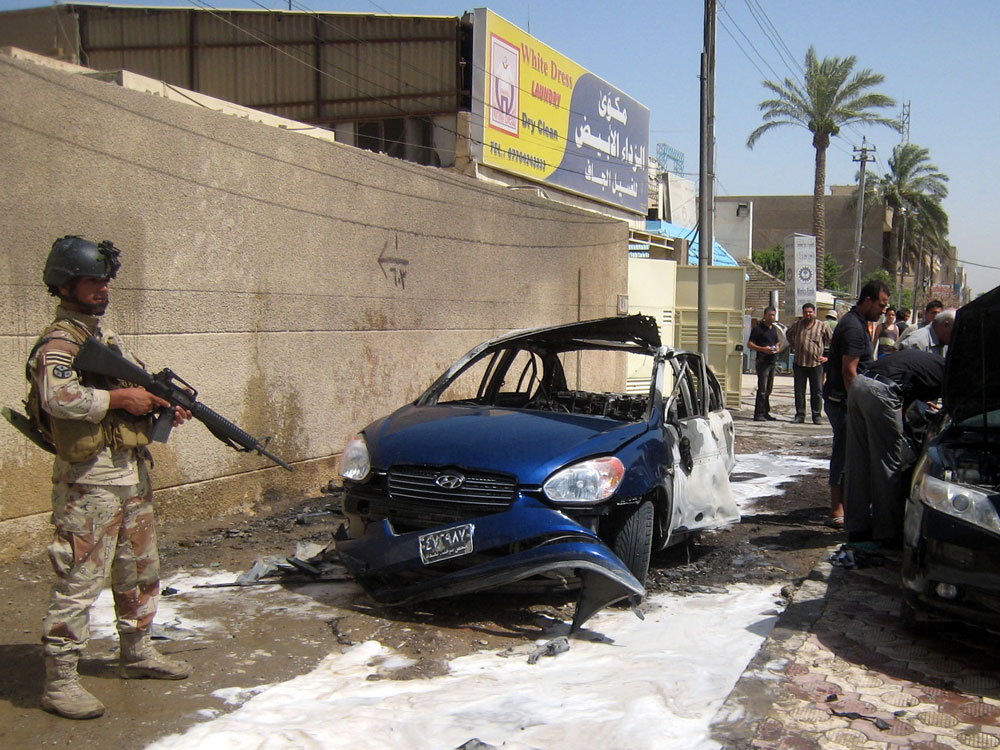 An Iraqi soldier stands guard after the detonation of a sticky bomb plastered to a vehicle belonging to an employee of the Iraqi Parliament in the Mansur district of Baghdad in June. The explosion injured two people.

Iraqi journalist Imad al-Abadi has watched the string of assassinations with growing apprehension. He shows off his own scars to a reporter and recalls the day last November when gunmen with silenced weapons attacked him as he pulled up in his car outside a relative's house.

"Four bullets, three grazed my head and one passed clean through my neck. I'm lucky to be alive," Abadi says.

No one was ever arrested in that case. Abadi says day after day, Iraqis are gunned down by weapons fitted with these locally made silencers, and people are asking why Iraqi security forces don't do something about it.

"The government's weak intelligence is the problem. Unless, of course, the government doesn't want to know who's behind these attacks," he says.

Politicians, journalists and university professors have been targeted, but the bulk of these assassinations have focused on Iraq's front-line guardians: rank-and-file security forces manning checkpoints or patrolling the streets.

The U.S. military's second-in-command, Lt. Gen. Robert Cone, says that may reflect the evolving nature of the terrorist threat in Iraq.

"When you see the Iraqis roll up, as they did a few weeks ago, a 2,500-pound bomb, you can count on the fact that that was probably a high-profile attack that didn't happen," he says.

Cone, the deputy commanding general for operations, says that's not to say that al-Qaida in Iraq and other terrorist groups no longer have the capacity to carry out major attacks. Four large explosions in July and August left 143 people dead and 330 wounded, according to Iraq's Interior Ministry.

Iraqis Live Amid Uncertainty And Fear

But Cone says the current level of about 15 attacks a day -- well below 2007 levels but still unacceptable -- suggests that what he calls "the network" is trying to weaken Iraq's defenses by going after individuals and small groups of security men.

"The current theory is that that is easier to execute than a large, high-profile attack, that this is what the network is now capable of. One would argue that the security measures of the Iraqis, with these checkpoints, have made freedom of movement more difficult. So they can't get their big bomb where they want to go, and so they're attempting to intimidate these mid- to low-level Iraqi security force members," he says.

Cone says the Iraqis won't be intimidated, and he expects their security measures to keep improving.

But these days, Iraqis trying to put the last seven years of war behind them find that their daily routine now includes checking underneath their cars for explosives and hoping they won't be nearby when the next car loaded with gunmen strikes.