Accessibility links
Avoid The 'Bonk': Running A Marathon Scientifically "Bonking" or "hitting the wall" is that awful moment when marathoners run out of gas. They've used up all of the carbohydrate fuel stored in their liver and muscles, and their bodies are forced to switch, painfully, to burning fat. Now a marathoning Harvard-MIT student has figured out how to calculate that point. 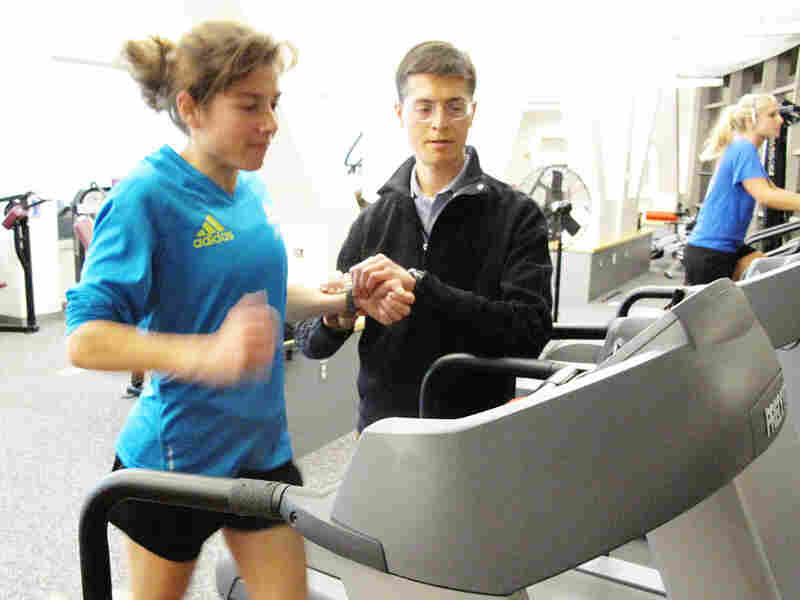 Ben Rapoport takes Erin Wyner's pulse as she runs on a treadmill to determine how many carbohydrates she should eat to run a successful marathon. Richard Knox/NPR hide caption 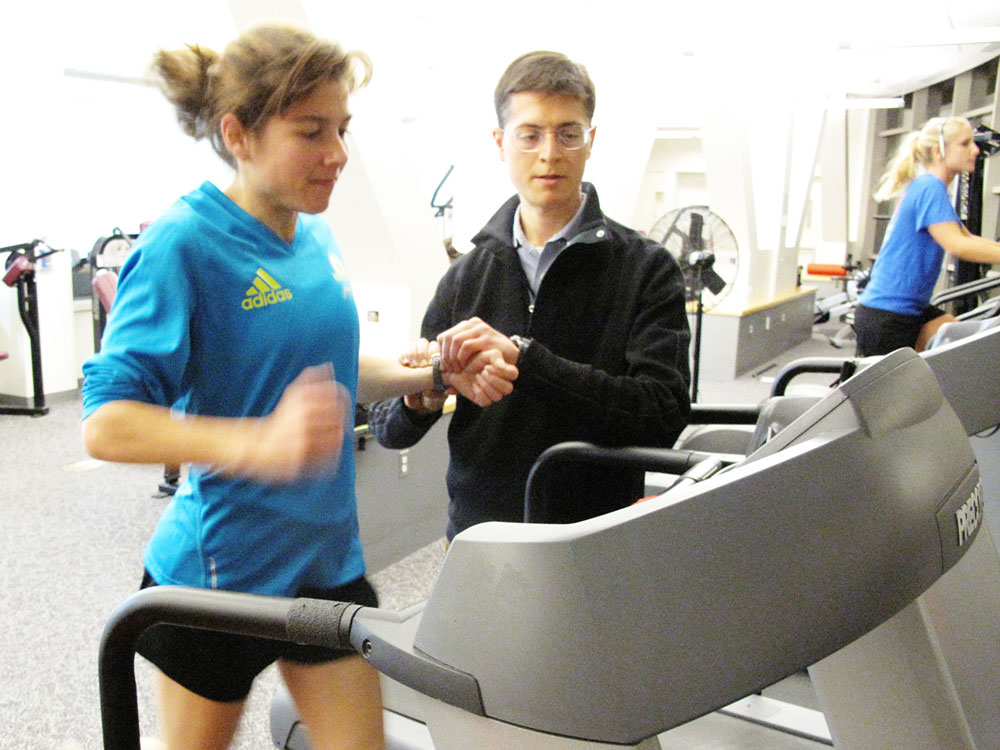 Ben Rapoport takes Erin Wyner's pulse as she runs on a treadmill to determine how many carbohydrates she should eat to run a successful marathon.

About 200,000 Americans will run marathons this year, and by some estimates about 4 out of 10 of them will bonk.

That's runner-speak for "hitting the wall," which is what happens when a long-distance runner runs out of gas, metabolically speaking.

Ben Rapoport hit the wall while running the New York City Marathon five years ago. Here's how he describes it:

"Somewhere in the Bronx, I started to feel like I couldn't keep up the pace," he says. "It was awful. I couldn't make my legs run any faster. And when I tried, it was very painful."

Rapoport is getting a Ph.D. in electrical engineering this year at MIT. He also happens to be a Harvard medical student who plans to be a brain surgeon. You might say he's pretty driven.

So he decided to apply his brain to the problem of hitting the wall. It's all about carbohydrates, he says.

"When an athlete hits the wall, [he or she is] essentially running out of carbohydrates in the leg muscles and in the liver," Rapoport says. "So when you bring the carbohydrate fuel tank to empty, the body is forced then to metabolize fat rather than carbohydrates."

There are all sorts of recipes to avoid running out of carbohydrates. They involve "carbo-loading" -- eating a lot of rice and pasta and other carbs before the race. There are also protocols for how to time these carbo pigouts to maximize the amount of carbohydrate that gets stored just where it's needed: in the legs.

Use Ben Rapoport's mathematical formula to calculate your own endurance potential and how much carbo-loading you should do before a race.

How To Avoid The Wall

But Rapoport is a precise guy. He wanted to quantify just how many carbo calories a particular runner is capable of storing, and how much he or she would need to run a marathon at a particular pace.

Understanding Rapoport's formula requires an advanced degree. But in principle it's pretty straightforward -- and accessible to any runner interested in finding the answers to two questions:

2.   How fast a marathon could I potentially run?

To illustrate how Rapoport's formula works, I recruited a young marathoner, Erin Wyner. She met Rapoport and me at an MIT gym.

"That's an excellent time!" Rapoport says. "Have you ever hit the wall?"

"I have crashed and burned and hit the wall in my first marathon," she replies. "It was a mindless struggle, a death march to the end."

(You have to take such statements from dedicated marathoners with a grain of salt. In fact, she finished that race with the enviable time of 3:35. But to her that was a disaster.)

How The Formula Works

First, Rapoport has to determine Wyner's maximal oxygen uptake. The technical term is VO2-max. There are fancy methods for determining a person's VO2-max, but Rapoport says a good-enough estimate can be derived from clocking an individual's heart rate at rest and while exercising.

Wyner's resting pulse is 63 beats per minute. After she runs on a treadmill for a few minutes, Rapaport measures it again -- 120 bpm running at 6.1 miles per hour.

Next he asks her weight -- 100 pounds. Knowing her weight allows him to estimate how many carbs her liver and leg muscles can store.

Rapoport plugs all of the numbers into his computer and comes up with an answer that impresses Wyner.

"It seems that you're capable at full carbohydrate loading of running a 2:44 marathon," he says.

"Wow!" she responds. "I'm surprised! I may never live up to it, but it's very intriguing. It's out there for me!"

To run her best time -- and avoid bonking -- Rapoport tells Wyner she'll need to stoke up before the race with 1,900 calories worth of carbs. And of course, she'll need a lot more training, not to mention that hard-to-quantify quality called grit.

Rapoport's formula isn't just for elite athletes, he says. Any long-distance runner can use it. "And," he says, "you'd better believe I'm plugging my numbers into that formula to know how many calories of carbohydrates to load before the race."