Penny McConnell, the food director for Fairfax County Public Schools in Virginia, is conducting a taste test, asking students whether they like a few new items that she's considering adding to the lunch menu. 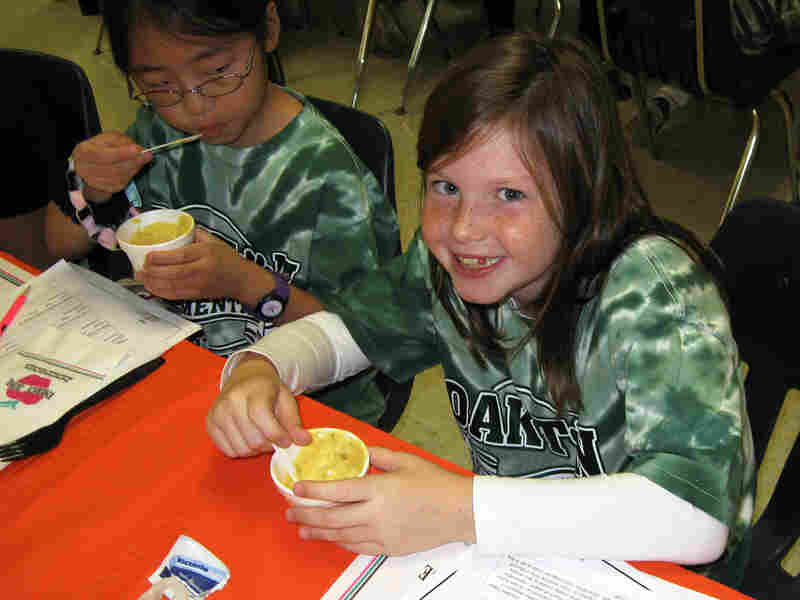 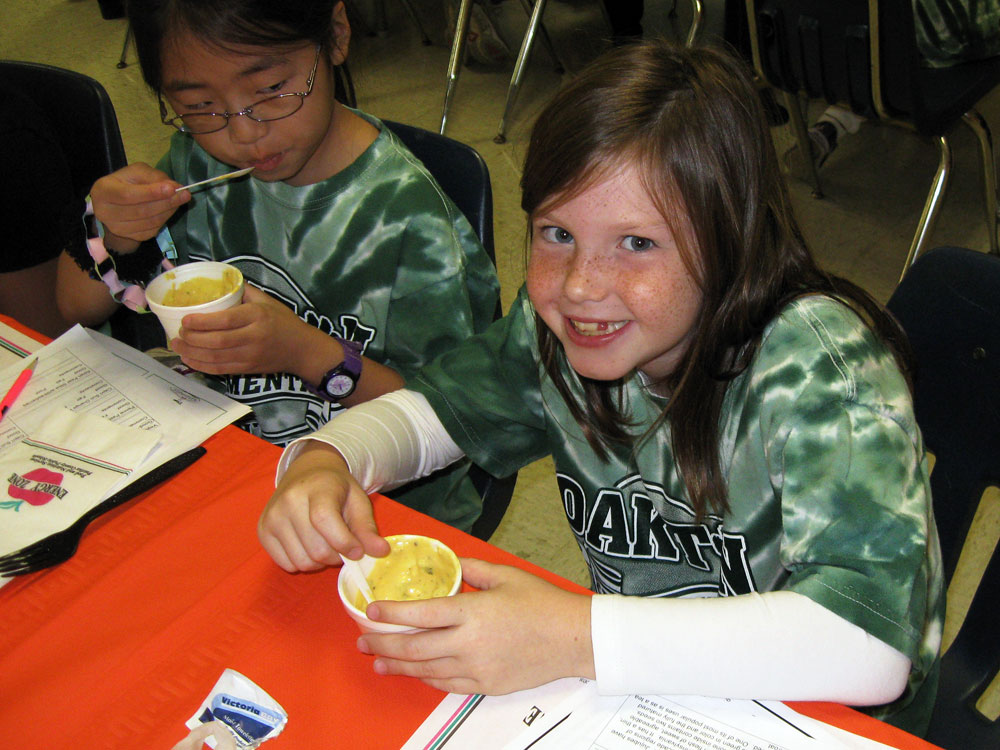 "Are you ready to start?" McConnell asks students. They are. "OK, the first thing we're going to test is cheese sauce with a couple of tortilla chips."

We live in a culture where choice is front and center. And McConnell says whether we like it or not, most kids have come to expect choice, too. That's why she's doing the taste test. Assistants in white chef hats and aprons serve up tiny bowls, and the kids are given pencils and a survey to rate the foods. They feel like little patrons being catered to.

"It tastes really good -- better than the ones we have now," says Nitya Reddy, a fifth-grader at Oakton Elementary School.

Her classmate Bella Bulhoes agrees. "It's so good," says Bella. "I'm going to circle 'good' because I've had some of it at the restaurant before, and it tastes just like the restaurant -- and I'm surprised by that. It would be awesome to have in our school."

What the kids don't seem to notice is that this isn't your standard nacho dip. Pureed into the cheese are a bunch of vegetables: There's butternut squash, sweet potatoes and white beans. The recipe was developed by two mothers who've come up with a whole line of cafeteria foods that they call Hidden Healthies. Tyler Clifford, a sixth-grader, is not in on the secret yet.

"I would be surprised if there was vegetables in there," Tyler says.

His classmate Emily Park is more skeptical. "It tastes a little different, but I'm not sure how it tastes different," she says.

After the kids are told that each of these new recipes is loaded with a bunch of nutrients, sixth-grader Christian Leavitt says it's clever, camouflaging healthy ingredients.

"They probably have it hidden because some kids don't like broccoli or other things," Leavitt says. "So, it's a good idea to hide them -- kind of."

Taste Is 'In Your Head'

Hiding healthy stuff maybe a good solution for the middle-school set. They're notoriously picky eaters, and rejecting foods that adults insist are good for you is part of growing up.

Taste is a suggestion more than anything else.

David Just, co-director of the Cornell Center for Behavioral Economics in Child Nutrition

"Food, to a certain extent, is one way of expressing their identity," says David Just, who co-directs the Cornell Center for Behavioral Economics in Child Nutrition.

He says kids increasingly have a lot of say over food choices, both at home and at school. They're not only influenced by what their peers say and by advertising, they also respond to how food is presented to them.

"Taste is a suggestion more than anything else," he says. He adds, "If you think something is going to taste really good -- if you've been told by others that it tastes good -- you build that into your head when you eat it. It's in your head."

Just and his colleagues have a new grant from the U.S. Department of Agriculture to evaluate a bunch of subtle psychological nudges aimed at encouraging kids to make healthier choices -- everything from financial incentives to arranging food differently on the lunch line. Consider milk: Most kids prefer chocolate, so that's what they pick up.

"But there's some portion of the kids that don't particularly care whether they choose chocolate or white," Just says.

A sampling of the $2 million in grants the USDA has awarded as part of its new effort to use behavioral economics to improve childhood nutrition:

Just says that when one middle school tried making the chocolate milk a little less convenient -- by moving it 6 inches behind the white milk. The change was surprising.

"You've got 20 to 30 percent of kids who suddenly switch," says Just. "And they're getting [fewer] calories for the same amount of protein and calcium, and other good things that are coming in."

A Cue From Above

There are likely lots of ways to nudge students using visual cues. Researcher Ann Ferris of the University of Connecticut is trying the kind of fancy lighting techniques you'd see in the aisles of Whole Foods.

"All of the schools we're working in use fluorescent lighting. That doesn't make somebody look good in an office environment," says Ferris. "It doesn't make food look good either."

She's going to document what happens when school cafeterias switch to specialty bulbs that enhance color and spotlight foods that are healthy. Her hope is that kids will buy more of the spotlighted foods without really noticing.

"We got to figure out some things so that the last thing in the world they know is that we're trying to get them to eat well," Ferris says.

In other words, lead them to good choices -- without telling them what to do.